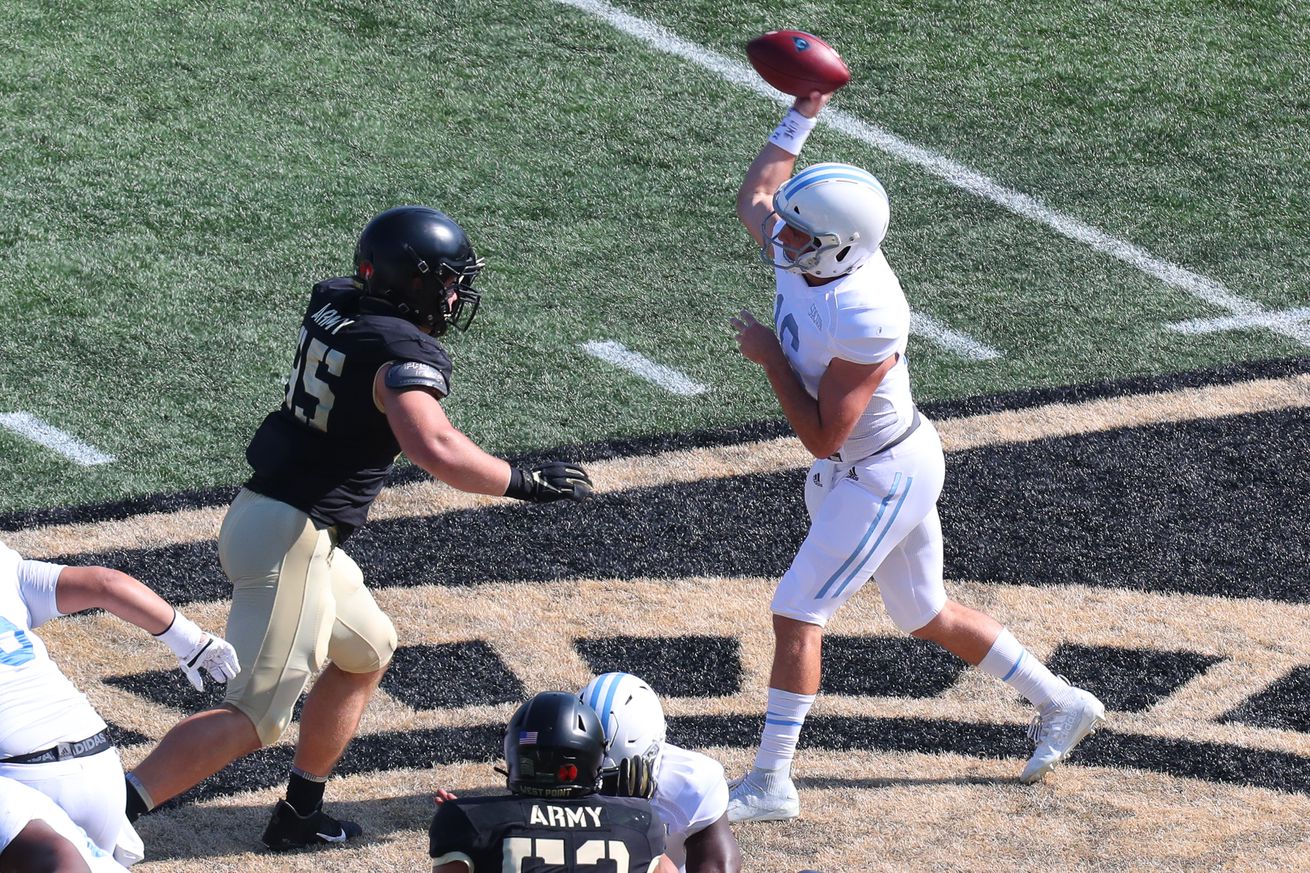 The Bulldogs held the Black Knights to their lowest rushing yards in the season.

While Army’s offense sputtered and struggled a bit on Saturday, its defense mostly buckled down in facing a triple-option attack from The Citadel, the Military College of South Carolina.

After a late score from the Bulldogs, the Black Knights were able to pick up three first downs and grind off more than three minutes of clock to seal the victory. The Black Knights extended their home winning streak at Michie Stadium with a 14-9 victory Saturday afternoon.

“Frankly, our offense just got whipped and they — their defense — deserved to win by how well they played the game,” Army head coach Jeff Monken said. “Fortunately, our own defense played well enough to win the game. They got stop after stop and had a couple of big plays.”

Army rushed for just 153 yards on 50 attempts, averaging 3.1 yards per-carry. It was the Black Knights’ lowest rushing total of the season, and it was hardly a good enough performance for both Monken and the players.

“We knew it wasn’t going to be an easy game, they had a good scheme,” said Army quarterback Jemel Jones. “ I take the blame for a lot of stuff that happened offensively today, so I need to get back in the film room and learn from my mistakes and I feel like we’ll be fine.”

With quarterback Christian Anderson out due to an unknown injury, Jones made his first career start as a sophomore, and though rocky at moments, also had a number of big plays. He was 4-of-10 passing with two interceptions for 75 yards, but he managed to connect with Reikan Donaldson on a scoring strike. Jones also rushed for 49 yards and a touchdown.

You can applaud the chip to cut on the BSLB or the fullback iso on the PSLB but you have to respect a TE that can be the point of attack. Proud of how far Chris Cameron has come (85) https://t.co/Myw9C2uG0K

The Bulldogs (0-4) entered the match-up as underdogs, but it was immediately evident that they were prepared to pull out all the stops, as they opened the game with an onside kick that caught Army off-guard. Though, their excitement was squashed almost immediately when quarterback Brandon Rainey threw an interception at Army’s 33-yard line. These nearly back-to-back plays symbolized what would be an afternoon of hard-nosed Service Academy football, weird decision-making and trickery.

The first quarter saw a number of incomplete passes and short runs from Rainey, and the likes of Army defensive lineman Arik Smith, Malkelm Morrison and Jabari Moore came up with sacks. Still, the Bulldogs got on the board first, connecting on a 39-yard field goal as time expired in the opening period.

Army responded two drives later when Jones found Donaldson for a touchdown, capping off a nine-play, 79-yard drive that ate up more than four minutes of clock.

The drive was a bright spot for Army after it had been unsuccessful on its first four series’ of the game. It was a peek at the Army offense that was expected Saturday. For Jones, it was trial and error shot on a plan he already ran.

“I missed Reik (Donaldson), I overthrew him, so I knew on this next time we run it the opposite way, I just had to come back and deliver a good ball,” Jones said. “Everything was good. The linemen did a great job blocking, Reik ran a really good route and I just had to put it on him.”

In the second half, the Citadel made some adjustments to their offensive scheme and brought out a different quarterback — something Army wasn’t totally prepped for.

A sophomore Jaylan Adams played a bit better for the Citadel than Rainey did. He completed just 3-of-4 passes for 20 yards, but also rushed for 55 yards and didn’t turn the ball over.

While the Black Knights’ offense were busy reacting to Bulldogs second half adjustments, it was the Army defense that kept repeatedly chipping away. The Citadel missed a field goal to open the second half, and didn’t see the red-zone again until Bulldogs’ defender Jay Smith picked off Jones and ran it back to the Army two-yard-line, setting up a punch-in run for Darique Hampton.

BIG MAN INT!!@CitadelFootball is right back in this one! pic.twitter.com/uDv7QFl7k3

In all, Army had three sacks and eight TFLs on the day, along with two interceptions.

Additionally, 10 of Army’s defenders made at least a three tackles a piece. Smith and Rhattigan led the way with a combined 19 total tackles.

“I thought the defense played their butts off. We played good enough to win. We’d play good enough to win in a lot of games, playing that way,” Monken said. “Our offense should feel humbled. I do. They just outplayed us.”

Cunningham coming up huge for the BKs.#GoArmypic.twitter.com/Y5F7gXgiQZ

The Citadel hoped to get the ball back after Hampton’s score, as they trailed by five points with less than four minutes to play. But Army’s offense — led by Maurice Bellan — was able to chew up the clock and pick up a few first downs on the ground to end the game.

While the Black Knights came away with a win, neither the players nor Monken were particularly satisfied with the performance. The offense failed to run effectively on the inside and outside, and failed to convert often on third down.

The good news for Army is, the offense played poorly and still won. The team can feel good about a victory a bit, then correct these mistakes before facing UTSA.