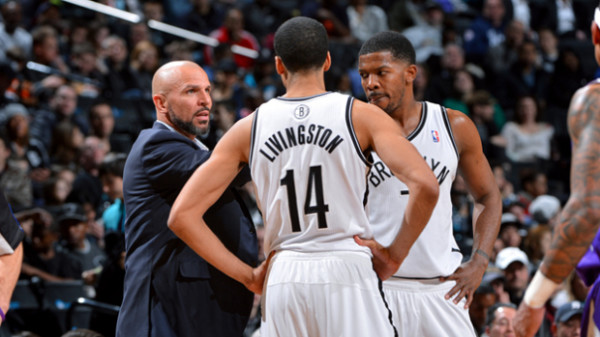 When Jason Kidd was hired by the Brooklyn Nets to be their new head coach, most of us thought that the man would easily be able to transfer his leadership as a Hall-of-Fame point guard for two decades to now being a leader of men for the Big Russian’s basketball team. The man had never coached a game in his entire life, but hey, he’ll be alright … right?

Then things started to happen.

– Jason Kidd got a DWI (along with a two-game suspension).

– A contrived drink-spilling when the man needed a timeout (one of the most hilarious things ever).

– The demotion of Lawrence Frank.

– Brook Lopez and Kevin Garnett went down with injuries.

– The look of uncomfortableness in that suit and tie.

What was the result of those “things” that happened? A 9-21 record in the first 30 games and the Brooklyn Nets officially becoming the laughingstock of the NBA. With a laughably high payroll and high-profile names on the roster, the ship was sinking fast and everyone was ready and willing to blame the light-skinned point god for all the holes on the squad.

Then more things started to happen.

– Jason Kidd got rid of that tie and grew a beard. (VERY IMPORTANT)

– Shaun Livingston became an integral part of the rotation.

– The Nets made us forget about Brook Lopez and Kevin Garnett.

In 50 games since the beard growth (I could be off on when this happened, but I really want to associate the Nets’ success to the beard), the Brooklyn Nets are 35-15, easily one of the best records in the NBA. If you prorated their last 50 games across an 82-game schedule, the Nets would be vying for the 1-seed in the East right now. Yes, you read that right.

What we know now is that the Nets are a really good basketball team, and in a league that loves to have its teams get up and down the court quickly with pace and athleticism, Brooklyn’s slower pace and the use of post-ups make the Nets a bit of an anomaly. No one uses the post-up offense in the NBA better than the Nets, and it’s one of the main reasons why they’re able to stifle the Miami Heat, as all that athleticism doesn’t matter when you can exploit a weak match-up on the floor. Per @Haralabob on The B.S. Report, Shaun Livingston currently leads the NBA in points per post-up, and it seems like Paul Pierce and Joe Johnson live off posting up on offense while using 23 seconds of the shot clock.

It might not be the most aesthetically pleasing, but the Nets have found their way, and Jason Kidd deserves a ton of credit for that. Also, the Nets’ success now makes the Eastern Conference playoffs compelling, as I think we were all about ready to mute all the playoff talk out East until Indiana and Miami squared off.

Not anymore — Jason Kidd’s Nets now have our attention. Here are your Monday morning reads to get your week started off right.

Here’s how to really detect lies — The Week

The Invention of the Slurpee — Priceonomics

This Final Four game-winning shot was worth millions — Quartz

On Real Plus Minus: Pieces, Pieces Everywhere — Hardwood Paroxysm

Martin Brodeur Gets The Bittersweet Goodbye Nobody Wanted — Deadspin

Eddie Maisonet is the founder and editor emeritus of The Sports Fan Journal. Currently, he serves as an associate editor for ESPN.com. He is an unabashed Russell Westbrook and Barry Switzer apologist, owns over 100 fitteds and snapbacks, and lives by Reggie Jackson’s famous quote, “I am the straw that stirs the drink.”

The post Starting Lineups: Making The Case For Jason Kidd As NBA Coach Of The Year appeared first on .