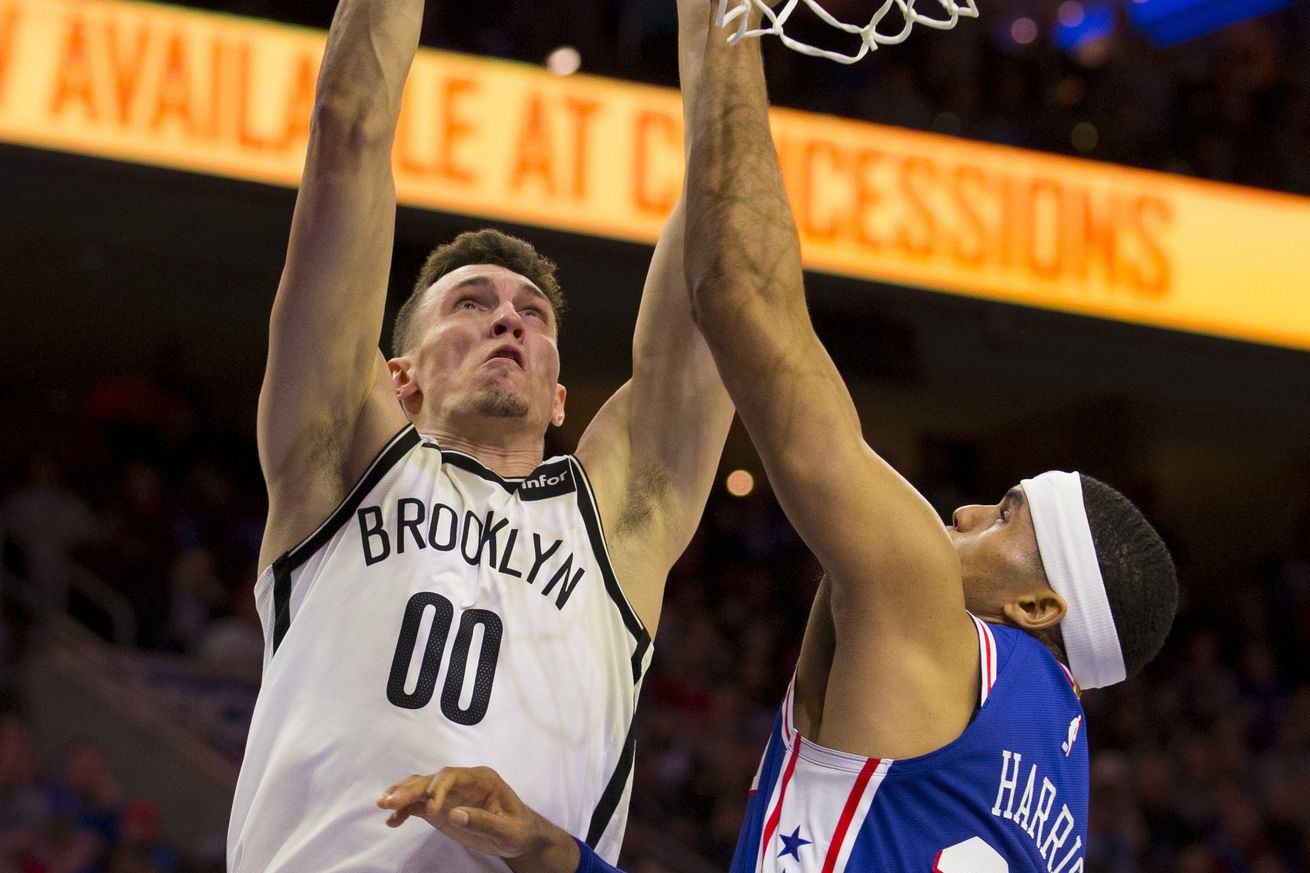 Following a frustrating 111-102 Game One loss to the Brooklyn Nets, Ben Simmons threw shade at Jared Dudley and Rodions Kurucs, whom he referred to as, “The other kid.”

The diss trickled over into Game Two. The chippy playoff battle has officially begun.

The Nets and Sixers were tied at 64 apiece with three seconds remaining in the first half. Just a couple minutes prior, Joel Embiid had delivered a brutal elbow to the face of Jarrett Allen. Allen admitted after the game that he had never been hit like that before. It was deemed a Flagrant 1, though awfully close to a Flagrant 2 and ejection.

“That was dirty. I was right there, and I saw how he was going with the elbow,” Kurucs recalled. “Do we have to pay for these [flagrant] fouls? Shit, I got one too so…”

Kurucs was frustrated. Sure, he’s a 21-year-old rookie from Latvia, but he doesn’t take any you-know-what. So, late in the second quarter, Kurucs returned the favor to Simmons, an elbow right to the head that led to a Flagrant 1 foul. The Philly faithful roared as the players were dispersed immediately.

After the game, Kurucs voiced his displeasure with Simmons, who he felt disrespected not only himself, but his veteran teammate, Jared Dudley.

“He plays hard, and I play hard. Also, I don’t like that he said in the media that JD (Jared Dudley) is guarding him and ‘that kid.’ Now, I want to let him know that he knows my name. I’ll play hard. I’ll go at him, and I’m not scared of him,” said Kurucs.

”I wouldn’t give him the enforcer title, but Rodi’s definitely a tough guy,” Nets’ center Ed Davis said. “From the first day in pick-up I knew that he was tough.”

The toughness and tenacity might just be something the Nets need. They won’t say or preach intentionally elbowing somebody, but if you mess with any of the players on the Nets, they’re going to stick up for one another.

“I didn’t go dirty, I was just trying to box out because he hit me, so I wanted to hit him,” Kurucs explained. “The thing is, my arm slipped and I got him in the jaw.”

Indeed, Kurucs has been that guy all year and yes, despite that slight frame, be the enforcer. During his introductory press conference with the Nets, the second-round pick was asked about fellow Latvian and former Knick, Kristaps Porzingis.

He kept his answer simple.

“I met him once before he got drafted. After that, we didn’t meet.”

Then, he was asked if he looked forward to playing against him.

“Sure, and beat his ass,” Kurucs said

Back in March during a must-win game against the Detroit Pistons, Kurucs had the assignment on the bigger and stronger Blake Griffin. The Pistons were closing in on the Nets in the standings and with the hardest remaining schedule at the time, the Nets needed to win this game not only to hold their ground in the standings, but to also win the tiebreaker against Detroit just in case the two teams were knotted up after game No. 82.

Kurucs has a big night on the offensive end, but his physicality was an issue for Griffin, who shot 1-of-10 from the field, turned the ball over four times and picked up a technical foul following a physical play between he and Kurucs.

It wasn’t just Griffin or Simmons. Back in January during Vince Carter’s potential final game against the Nets, Rodi came down and incidentally elbowed him in the head. As Rodi ran back and offered to help Carter up, VC smacked his hand away in frustration.

Here’s what happened after Rodi got Carter with an elbow: pic.twitter.com/7YRhhYgkky

More recently, in a game against the Toronto Raptors, Kurucs lowered his shoulder and gave a little something extra to All-Star Kawhi Leonard. Leonard, typically a mild-mannered player, shoved Kurucs with a disgusted look on his face.

His teammates and coaches have long appreciated the grit. It’s become his subtle role on the team— defending and frustrating the other team’s best player with physicality and toughness.

“I don’t know what neighborhood he grew up in in Latvia, but that’s a tough neighborhood,” Atkinson said back in March. “That’s one tough dude.”

The Nets have this “happy to be here” mentality when it comes to the playoffs but make no mistake: They know what they’re capable of. They know they have the ability to upset a team like the Philadelphia 76ers – a roster filled star players.

So, when Ben Simmons disses someone that Kurucs looks up to, namely Jared Dudley, he’s going to feel disrespected. When Ben Simmons refers to him as “The other kid” even though the two played on the same team during the Team World vs. Team USA challenge at All-Star Weekend, he’s going to feel ever more disrespected. And when Joel Embiid delivers a hard elbow to his teammate, 20-year-old Jarrett Allen, you can count on Rodions to be the guy to step in and deliver a message right back.

Simmons can call him “The other kid” all he wants. He has every right, even though it’s a sign of disrespect.

But perhaps it was out of frustration, something Kurucs has done with opposing players all year. After all, in Game One, Kurucs held him to nine points and a minus-21 on the night, while the Nets walked out of the building with a win and ultimately a successful trip in Philadelphia.

So, when Simmons and the Sixers arrive to Brooklyn on Thursday, it’ll be clear who Rodions Kurucs is and how he wants to play. He’ll have the matchup on Simmons and he isn’t going to back down.

“Like Shabazz Napier says, “[he’s] somebody you definitely want on your team [and somebody] you don’t want to play against.”