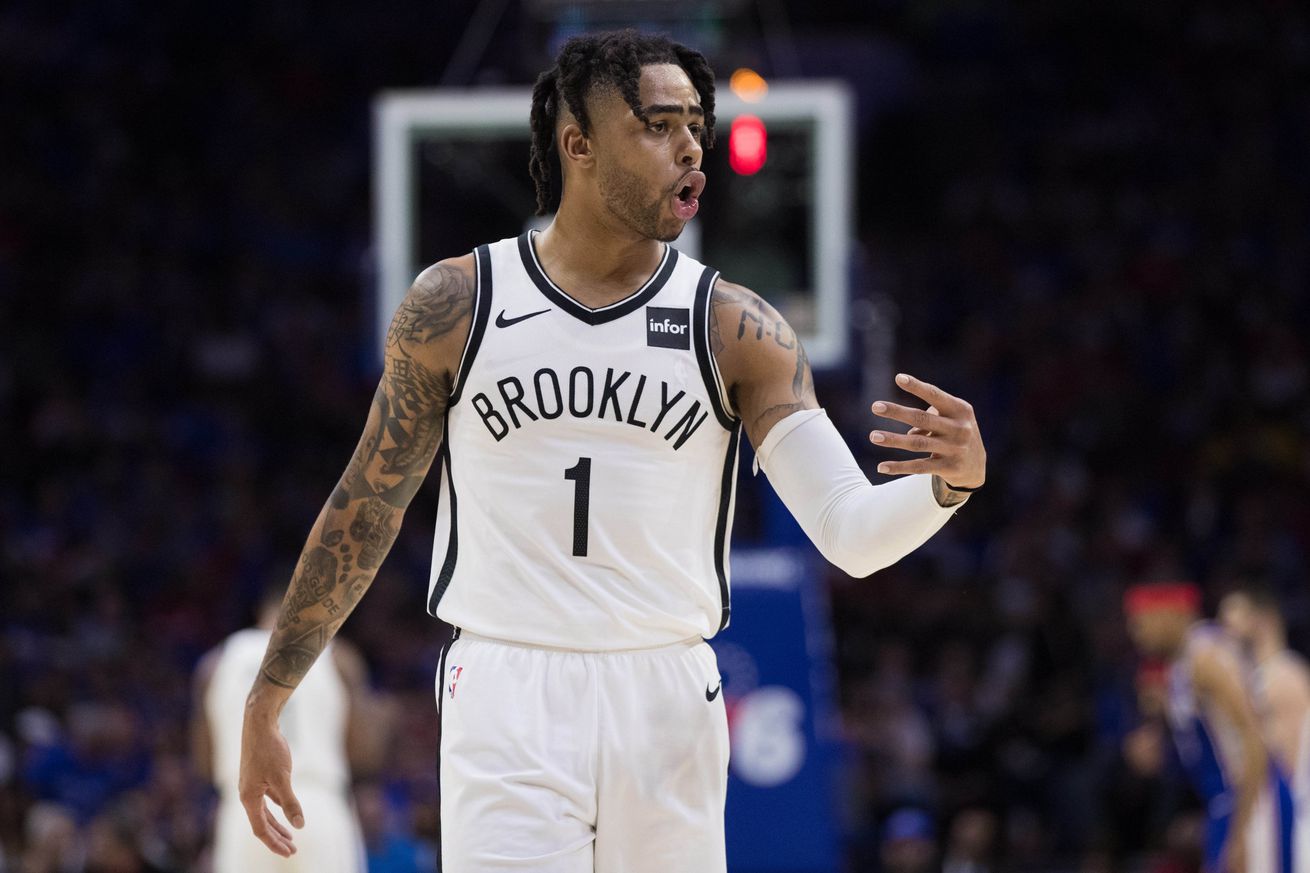 PHILADELPHIA, P.A. —Our process is our progress. And unlike Philadelphia, the Brooklyn Nets are playing with house money. The Nets aren’t supposed to be here. They stormed into the playoffs with three games left, and they might’ve just proved that this sixth seed isn’t a team you want to tussle with

The low expectations might be the best thing for them because they possess that I don’t give a you-know-what attitude.

“We just look at it, we have nothing to lose. If we go out and get swept, that’s what’s supposed to happen, so you got that mindset – that I don’t care, I don’t give a f— mentality,” Ed Davis said.

Philadelphia got their first dosage of that same moxey on Saturday. The Sixers led 22-21 in the first quarter… and that was it. The Nets played physical, drove the ball, hit their free throws and played some great defense on Philly’s stars.

They won by a final score of 111-102, their first playoff win since 2015. It was also the Nets’ fourth straight victory, following end-of-the-season wins vs. the Bucks, Pacers and Heat.

“We weren’t rattled,” Kenny Atkinson said. “You’re afraid with this crowd, and the team they have, that they’re going to knock you out of the box quick. I thought that we kind of took a couple of punches from them, took a couple of runs and still kept our composure. That’s big progress for us.”

Think back to the night Caris LeVert got injured. Now look at him! In his playoff debut, LeVert finished with 23 points (plus-18) in 23 minutes. His prowess at the rim was unchallenged by Philly and his defense was superb.

Behind his lead, the Nets went on a 20-1 run bridging from the first to second quarter as they took a 17-point lead. Joel Embiid, who was questionable for this game, was 1-of-9 from the field at that point. He finished 5-of-15 with Ed Davis and Jared Dudley both playing a crucial role in stopping him.

Jimmy Butler closed out the first half the same way he broke Brooklyn’s heart back in November with a step-back three on the right wing extended, cutting the deficit down to eight at half.

“When you got a player like Jimmy [Butler] and Joel [Embiid] over there, like those caliber players, you can never count them out,” D’Angelo Russell said after the game.

Things looked a bit ugly at the beginning of the third, with Philly going on a 16-5 extended run to cut Brooklyn’s halftime lead to two.

But then, playoff DLo came alive. D’Angelo Russell, also playing his first playoff game, scored nine points in the first five minutes of the third — 14 total in the quarter, lifting Brooklyn to an 11-point lead entering the fourth.

Then, in the fourth, he hit the dagger with a little more than two minutes remaining.

Russell finished the night with 26 points on 10-of-25 shooting after going 3-of-15 in the first half.

“The same shots I was missing early, teammates kept putting me in a position to make those shots, so I just kept taking them and they started falling,” said Russell after the game. “Coach set us up earlier this season with a routine and recipe for the offense and it’s been flowing ever since. We’ve got the right pieces to keep it going. You got guys like Caris [Levert] and Spencer [Dinwiddie] that it’s hard to stay in front of those guys, then you add Joe Harris and other guards and to capitalize on that, it’s fun to be a part of.

“He’s just such a dominating player. Even when he misses, he goes and gets it. It’s hard to figure out a way to stop him…I guarantee Game 2 you’ll see Superman Joel. I just know it,” said Kenny Atkinson.

Dudley was particularly crucial in this game. He was physical in covering Embiid and he was chippy on both ends of the floor. He’s the veteran leader every team needs.

“We call him Grandpa because he studies the game, he watches film, he knows what he’s talking about. A lot of guys respect him,” said DeMarre Carroll afterwards.

Along with Dudley, Davis was physical and grabbed a season-high 16 rebounds to go along with 12 points. The Nets hit 24 of their 26 attempted free throws, 11 of their 26 three-pointers and held Philadelphia to just 3-of-25 from three. Brooklyn’s bench out-scored Philly’s bench 59-26.

Jimmy Butler finished with 36 points, while J.J. Redick fouled out and finished just 2-of-7 from the field. Tobias Harris finished with four points in 41 minutes.

The biggest key? Brooklyn didn’t fold. Philly made their comebacks — especially the one in the third quarter, but they fought it off every time. Easy to say they probably don’t get that victory early in the season. It’s a sign of growth and maturity.

“I think earlier in the season, especially when we were struggling, we’d lose games like that. We’d get a lead and turn the ball over and take bad shots. I just think our maturity level—our collective maturity—has improved so much. That being said, I was still nervous even with the 12-point lead, but I thought we did a pretty good job closing it out—our defensive discipline and then offensively, taking care of it and then getting the shots we wanted,” said Kenny Atkinson.

Brett Brown didn’t want to play Brooklyn in the first round and we saw just why on Saturday afternoon. These guys are going to give you a dogfight 10 out of 10 times — and that’s not something you want.

Brooklyn’s process was different. And they’re ready to surprise the NBA world.

“Listen, I know we have to stay humble. I have to stay humble. So I’m not going to celebrate this victory. I’m sure I’m going to look back on it and be extremely happy [with] how far we’ve come, that we won our first playoff game. It’s very cool. But they lost their first playoff game last year, too, so we’re a humble group and we know how far we’ve got to go. Yes, I’m emotional about it, happy about it, but just got to put that in a little closet or little drawer until after the season.”

But with the I don’t give a you-know-what attitude, these guys might do the improbable, as they have all season.

Only six members of the Nets have playoff experience (and one of those, Spencer Dinwiddie, played only one game and two minutes.) So how’d they do?

The Nets leading scorers, D’Angelo Russell and Caris LeVert, finished with 49 points. And Dinwiddie had another 18. Rodions Kurucs and Jarrett Allen didn’t do so well. Allen had two points, Kurucs didn’t score.

Russell’s 26 points was in fact the most ever for a Nets’ playoff debut, one more than Bernard King in 1979. LeVert’s 23 ranks third, tied with Buck Williams, who had 23 in his 1982 debut. Pretty, pretty good.

In a weird moment late in the game. ESPN cameras caught Joel Embiid and Amir Johnson checking Johnson’s cell phone … with Philly down 16!

Doris Burke is bothered by Embiid and Johnson viewing a phone while in the middle of a playoff game. pic.twitter.com/VWeno85VqG

What could they possibly be checking? Restaurant reservations? Who do we know in Azerbaijan? How many points do D’Angelo Russell, Caris LeVert and Spencer Dinwiddie have? Ed Davis is making how much money??

Embiid said Johnson was checking on his daughter who he said is “extremely sick” and he just looked down. In general, even having a cell phone the bench is a no-no, as Bobby Marks tweeted.

Use of a cell phone on the bench is a violation of the NBA Operations Manual. Violation will result in a substantial fine and/or suspension.

Later, the team and Johnson released statements announcing that the veteran player had been fined an undisclosed amount. “I take full responsibility and will accept the consequences of my actions,” said Johnson. “I also apologize to my teammates, the 76ers organization and the fans for the distraction this has caused.”

After booing their guys throughout the game and even mocking them by joining in a resounding “Brook-lyn” chant, Philly fans started exiting the Wells Fargo Center with three minutes left in the fourth. Sad.

Post-game, Ben Simmons admitted that the booing got to him … and he had some harsh advice for Philly’s famously fickle fans.

Kenny Atkinson’s pre-game talk before his first playoff game as a head coach.

Asked if he was nervous… “Not nervous, excited.” pic.twitter.com/qhCPXm0ntu

All love between Jarrett Allen and Philly’s mascot pic.twitter.com/clbRmZGglw

For a different perspective, head on over to Liberty Ballers, our 76ers sister site on SB Nation