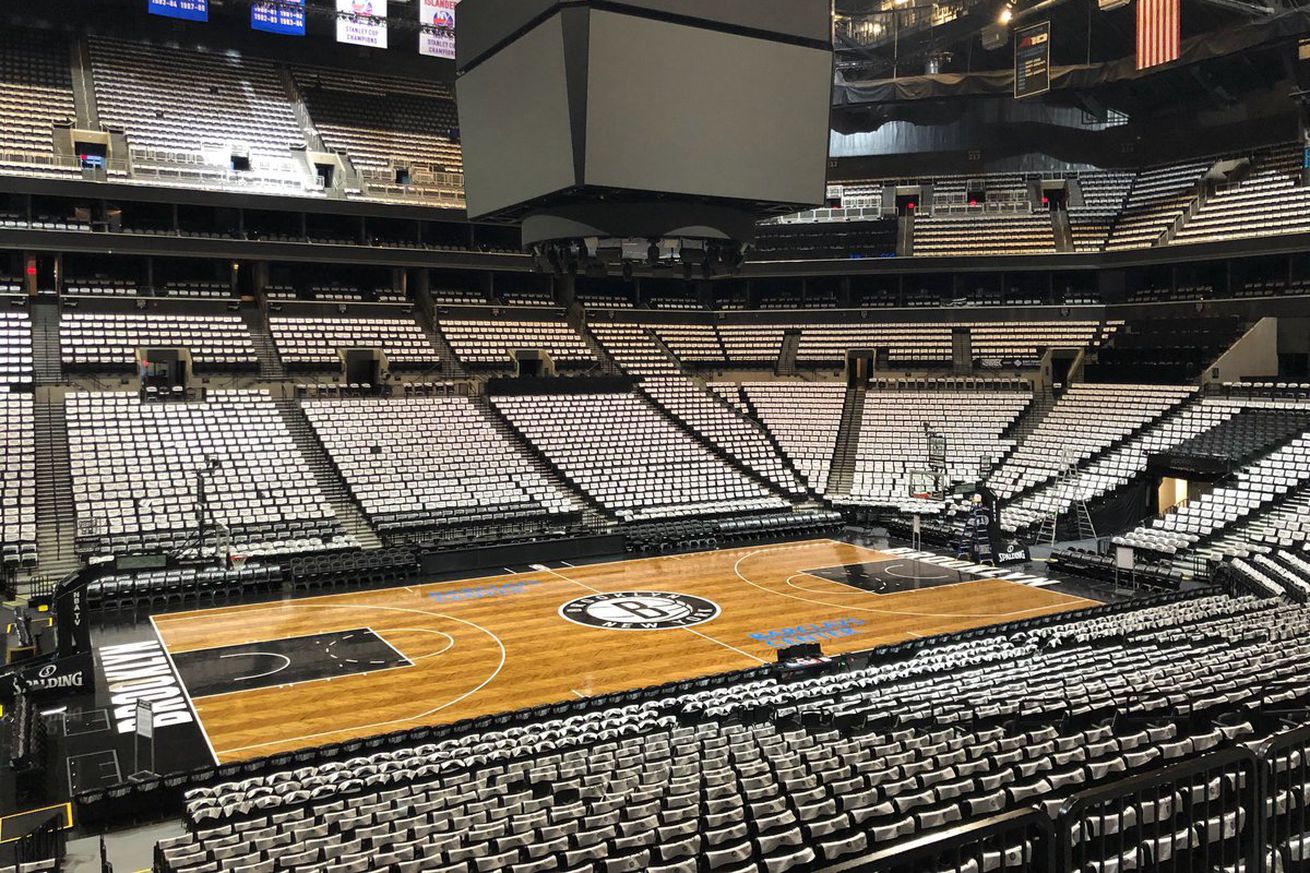 THAT’S RIGHT: BACK TO BROOKLYN AFTER FOUR LONG YEARS!

Whatever happened in Game 2 —the 51-point third quarter, the Flagrant 1 that should have been a Flagrant 2, the disrespectful press conference— it’s over and Game 3 will be played at Barclays Center in Brooklyn, USA, in front of a sell-out crowd.

Yeah, it was deflating that the Nets couldn’t even sniff a comeback, but Thursday, the Nets will try to regain the series lead before a packed and energized Barclays Center. Let’s get into it.

Allen Crabbe (knee) is out and Jared Dudley (calf) is probable.

The Sixers are healthy. Well, depending on how you define Joel Embiid wearing a knee brace that experts have noted are worn mostly to deal with tendinitis and arthritis “healthy”.

I was going to talk about the post-game laughing incident at the end of the review, but getting it out of the way now is probably a better idea. For those of you who missed it, Joel Embiid gave a copy-and-paste apology regarding his Flagrant 1 on Jarrett Allen, after which Ben Simmons began to chuckle. Embiid followed suit. It was, to say the least, disrespectful. Is Joel Embiid really sorry about his foul on Jarrett Allen? Who’s to say? What I saw was two kids who have yet to mature to the point where apologizing for something isn’t funny anymore. Simmons is 22, Embiid is 25. I’m 23. I’m not saying I like what they did, but I’m also saying it didn’t shock me. Actions, however, do not come without consequences. I’d keep an eye out for an errant Rodions Kurucs elbow or extra-hard, knock-you-on-your-ass Ed Davis screen. Just saying.

Back to the actual basketball stuff, there’s a lot to be taken away from this game. The Nets defense looked porous, allowing Tobias Harris, Joel Embiid, JJ Redick, Ben Simmons, Boban Marjanovic, and Mike Scott all to score 15 or more points. Basically every Sixer got hot at some point, and seemingly all of them in the third quarter. The Nets need to do a better job at containing some of the more auxiliary guys like Boban and Mike Scott. If those two are scoring 15 a night this is going to be a short series.

On Boban specifically, it drove me absolutely nuts watching him park himself under the rim on defense and deter any Net from even trying to score on him. Caris LeVert and Spencer Dinwiddie did a lot of the same stuff they did in Game 1 when he was down there, which was blow past their perimeter defender, realize Boban is standing there at 16-feet tall, and force a pass out of the post. No, no, no. I have long been a Boban fan. He is hilarious, lovable, and in short stretches he can look like the most dominant player on the court, mostly on offense where nobody can even try to guard him near the basket. The reason he can’t play longer stretches of time is his stamina and his defense. Boban has averaged 4.4 fouls per 36 minutes in his career, and 3.9 this season. The guy can barely move. When Rondae Hollis-Jefferson checked in as a last-ditch effort for some spark, he immediately took it to Boban and drew an easy foul. All it takes is the effort, of which RHJ lacks none.

This is so important and worth all of this emphasis because there’s no stopping Joel Embiid. He is going to get his points and his free throws and make an impact on defense. What the Nets can do is attack Boban while Embiid is sitting, which is pretty often. He’s only played 22 minutes per game so far in the series due to his knee issues and he is literally averaging a point per minute. Stop Boban, and the Sixers won’t have much else to fall back onto.

The Sixers out-rebounded the Nets 49-32 and that is just too wide a margin for the Nets to allow again. They have to do a better job at boxing out the Sixers, especially on defense where Philly grabbed 15 offensive boards. Brooklyn doesn’t have nearly as much pure talent as Philadelphia, so they’re going to have to play both harder and smarter if they want to win this series. They have to win the turnover, foul, and rebounding battles. There is absolutely no reason that Caris LeVert and Spencer Dinwiddie can’t put multiple Sixers in foul trouble early on.

The Nets biggest problem was team defense, which I’m sure Kenny and his assistants have been in the lab trying to figure out for a couple of days now. We’ll see how they counter in Game 3. Something a little less technical is the fact that the Nets need their one All Star to be an All Star. This series is unwinnable if D’Angelo Russell is even just good, which is what he’s mostly been so far. He isn’t shooting great, 39% from the field and 38% from three, and his assist numbers are down to 3 a game. The Nets play better when DLo can whip passes around the court to open wings and diving bigs, so opening up the offense and giving D’Angelo a little more room to cook is going to be imperative going forward.

Wednesday was the third anniversary of the Nets announcing Kenny Atkinson as head coach. Atkinson was asked about the milestone.

“I’m proud of it — we’re proud of it, I should say,” Atkinson said. “The fact I’m here in this playoff media scrum, didn’t expect it to come this soon. It’s hard to believe, quite honestly. We’re ahead of schedule and proud of that. Now it’s like, how do we win this series? It’s not like we’re happy to be here. We can compete with these guys and we can get them if we can play the way we’ve been playing all year.”

Jimmy Butler is a polarizing guy. You kind of have to be if your best friend is Mark Wahlberg. He forced his way out of Chicago, forced his way out of Minnesota, and is now a Sixer and also a soon to be free agent. Who’s going to sign him to a big, multi-year deal? I’m really not sure. The Lakers, probably. I actually think he makes a lot of sense next to LeBron James. But at present, he’s a problem for the Nets as the Sixers best wing scoring threat, and has the ability to will himself into having productive games. He can also be forced into taking bad shots with tight defense, he isn’t going to pass up a deep midrange jumper just because someone’s an inch away from his face. Mamba Mentality!! He shot 3-10 from the field and 0-1 from three in Game 2. He also attempted just two free throws. More of that please!

Bonus Player to Watch: Jarrett Allen. After all the Embiid stuff went down after the game, you know what I expect from Jarrett Allen? Composed, calm, smart, tough basketball. He’s going to pick his spots for shots, he’s going to set a ton of screens, and he’s going to pass well out of the post. The kid is a professional in every possible way, and it is basically impossible to shake him. I wouldn’t complain if he threw an elbow or two around, but he’s smarter than I am. Guy builds computers in his spare time.