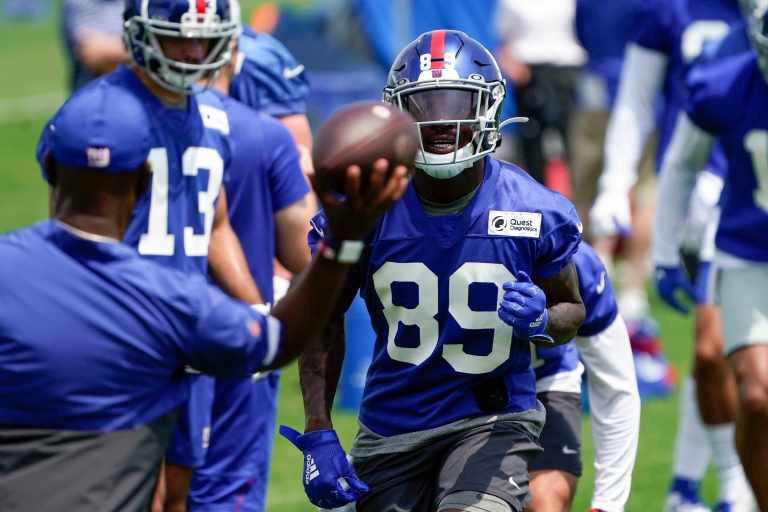 At this point, many of the top playmakers for the New York Giants are synonymous with being injury prone. Just about all of their main skill position players on offense have spent time on the sidelines due to injuries in 2021, and some have been there more than others.

Promising rookie Kadarius Toney has battled injury from week to week, and that trend continues headed into the Eagles game. After playing on Monday Night Football and receiving 12 targets for 7 catches and 40 yards, Toney did not practice on Wednesday or Thursday according to the team injury report. The cause is a quad injury.

Another notable name dealing with an injury right now is Saquon Barkley. Barkley still isn’t completely over his ankle injury from earlier in the season, and was limited in practice on both Wednesday and Thursday.

It’s easy to see why the Giants believe Barkley is still hurt, given his performance coming back against Tampa Bay. Barkley had 6 carries in that game for 25 yards, and while he also had 6 receptions, he was far from the kind of impact player the Giants were hoping to get with his return.

Barkley has only played in 6 games this season and, before the Bucs game, was out since week 5.

Sterling Shepard rounds out the group of big-name playmakers to be limited or sit out. Shepard, who has only played 5 games this season and hasn’t taken to the field since week 8, did not practice on Wednesday or Thursday.

With the firing of Jason Garrett, many fans are considering the future of the offense. The problems, however, aren’t just in the realm of playcalling. While scheme and tactics are important, it’s equally important to have top talents that stay on the field and play consistently.

Every NFL team contends with injuries, but it would be a lie to say that every player is injured at the same rate. Some teams manage injury risk better than others, and the Giants appear to have built their offense on a house of cards that depends on specific players defying trends and staying healthy.

At times, the offense has even been lackluster after getting “offensive weapons” back – even as these players take the field again, they are often out of form and require more time before they can play to their potential.

This is undoubtedly an issue of roster construction. And when the team owners review Dave Gettleman’s performance this offseason and decide whether to keep him, the injury problems faced by the team right now should definitely be one o the topics brought up.