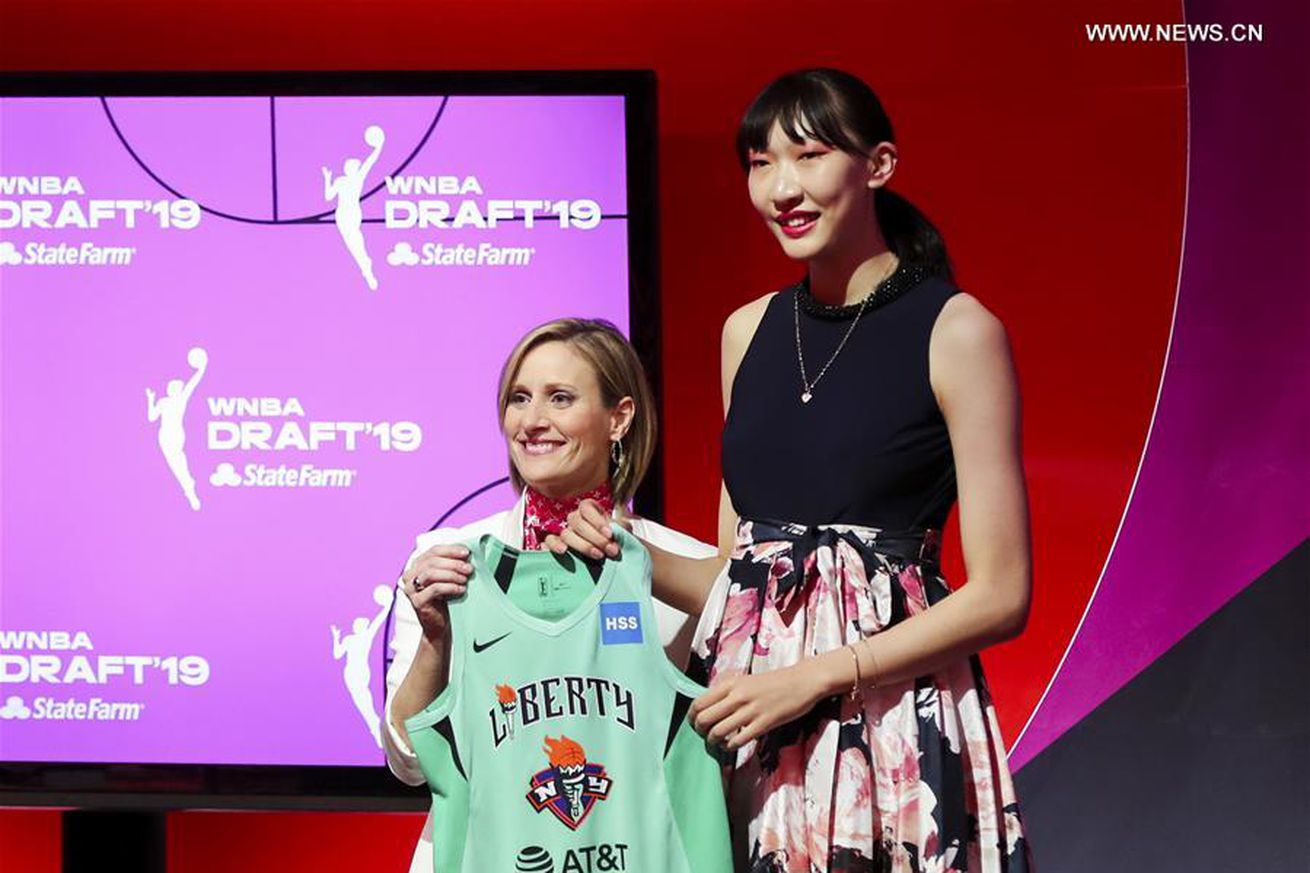 After taking top scoring guard Asia Durr with the second pick in the WNBA Draft, the Liberty surprised a lot of people by taking Han Xu, a 6’9” Chinese center with the 14th pick. Han, 19, is the second player from China drafted directly into the WNBA. She was also the youngest and tallest player taken Wednesday.

Han was on hand in New York for the selection…

No. 14 overall pick Han Xu (China), becomes the FIRST NBA Academy graduate to be drafted into the @nba or WNBA! pic.twitter.com/I9CfMc8u2b

Han was emotional after being drafted.

She told Xinhua, the Chinese news service, “I cannot help crying because my parents on site let me watch a video message sent by coach Xu (the Chinese national team coach). It brings back the memory of hardship on the road to WNBA.”

“I did not assume that I could join WNBA in such a short time. I must thank my parents, coach Xu, my teammates in all the teams I have ever served for their great help,” Han added.

Han immediately becomes an NBA/WNBA success story. She becomes the first graduate of the NBA Academies program to get drafted into the WNBA or NBA, “a big milestone for the league,” as ESPN’s Jonathan Givony tweeted Wednesday night.

Among those who congratulated her was Jeremy Lin.

Congrats!!! Rooting for you https://t.co/UPAibqW5dn

The selection, of course, further cements the Liberty’s connection to China. With Joe Tsai, executive vice chairman of e-commerce giant Alibaba, now the owner, and Han as a star, the Liberty are likely to become a much bigger attraction in China. The Chinese women’s basketball team, of which Han is a big part, plays the Liberty May 9 in an exhibition at Barclays Center.

Tsai told Chinese online platform Toutiao that Han’s signing is as big as the Chinese trailblazers entering in the NBA a decade ago.

“Han Xu’s joining is like Yao Ming and Yi Jianlian,” he said. “It will definitely play a positive role in Chinese basketball and will become a role model for young people, encouraging them to work hard to realize their dreams.”

That does not mean “signing Chinese players for the sake of it,” Tsai, who’s also minority owner of the Nets, added.

“If there are good players in China, we will do our best to help them join the NBA and WNBA,” he said. “I don’t quite agree with finding players just for the Chinese market. It is the most important thing to play well.”

Graduated from the well-known middle school attached to Tsinghua University in 2017, Han turned into a professional player and joined Xinjiang to compete in the Women’s Chinese Basketball Association in 2018. Averaging 15.9 points and 8.9 rebounds, Han roared into the WCBA All-Star starting lineup and the Chinese national team.

Then she set a target of going to WNBA in three years. In the 2018 FIBA Women’s World Cup in Spain, Han devoted 20 points in China’s encounter with the United States in the group stage when China lost with a 12-point margin, the smallest in more than 30 years. Her fast pace, accurate shooting and ability of reading the match stunned the opponents.

Han’s father was a professional basketball player and her mother was an amateur. Han said, “I have played basketball for 10 years. When I was a child, I was taller than others and I thought I must have something to do with basketball this life.”

Talking about the draft, Han said, “I don’t care about being picked in the first, second or third round. The most important thing is I have come to WNBA and I’ll try my best here.”