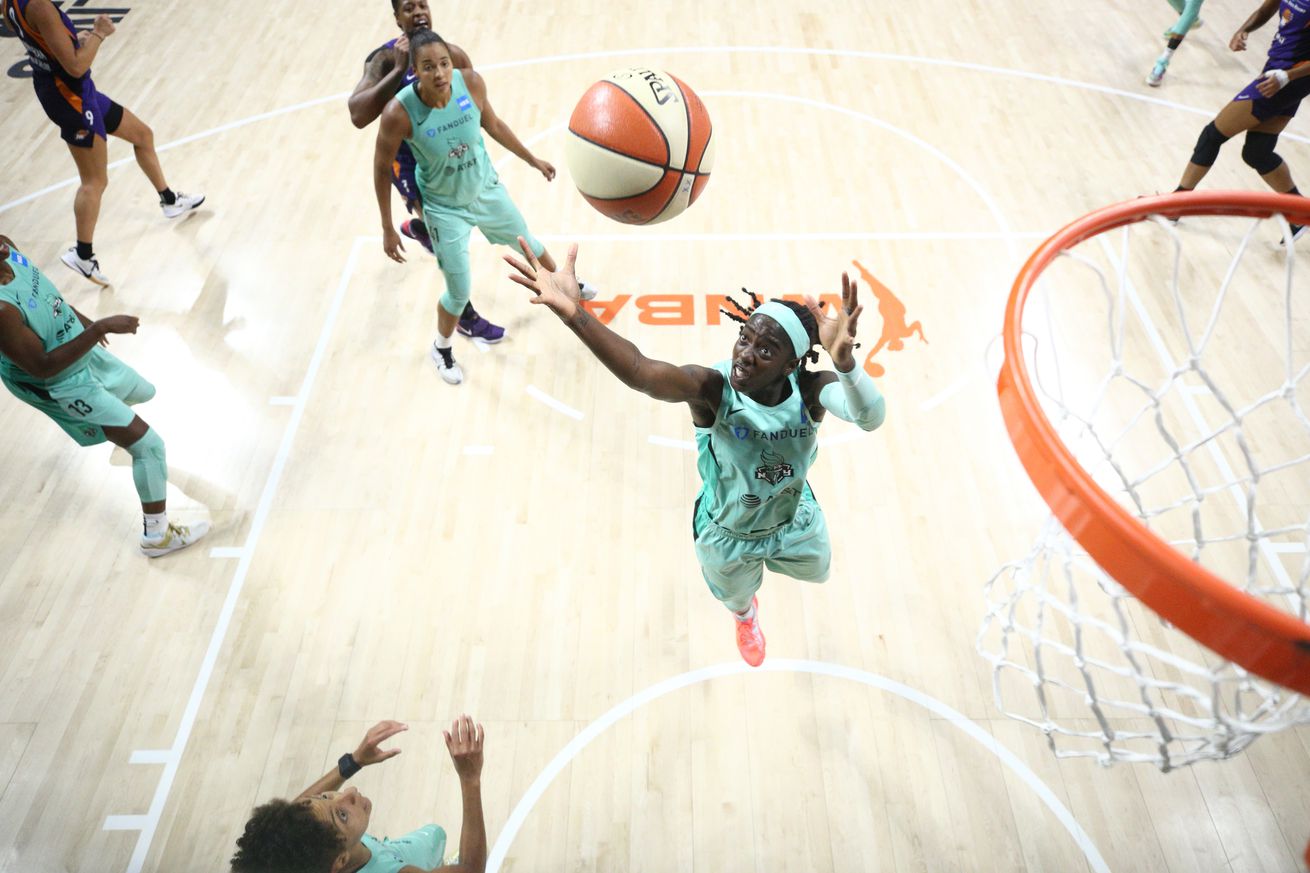 The New York Liberty have officially been eliminated from playoff contention following Saturday’s loss to the Phoenix Mercury, 83-67. With the loss, the Liberty drops to 2-15 on the season, losing their fourth straight game, while the Mercury extends their winning streak to six games and improves to 11-7 on the season.

There are only four games left.

Along with the loss, the Liberty, once again, got bit by the injury bug. Paris Kea suffered a lower left leg injury in the first quarter. Kea, who has taken advantage of her new role as a starter, appeared to roll her ankle and was assisted off the court by her teammates. New York head coach Walter Hopkins has praised the rookie guard for being a spark on both ends of the floor. Kea finished with three rebounds and one assist in four minutes of play.

The Liberty entered Saturday’s game without Sabrina Ionescu, who is rehabbing a left ankle sprain, and Kylee Shook, who is also is dealing with a left ankle sprain. Ionescu is not in the Bradenton “wubble” and hopes for her return are waning.

Despite being eliminated from playoff contention and Kea’s injury, there were positive takeaways for the second-youngest team in the WNBA.

Joyner Holmes, one of the Liberty’s seven rookies, set a new career-high in scoring, finishing with a 13 point 13 rebound double-double in 24 minutes of play. The 6’3” Holmes shot 6-of-17 overall, going 1-of-7 from deep. Layshia Clarendon continued her strong play, finishing with 12 points, three assists, and one rebound in 30 minutes of play. She was the only starter to finish in double-figures.

Postgame: Coach @WalterHopkinsJr, @JoynerTooTall, and @Layshiac reflect on Joyner Holmes’ career night and ways the team has improved over the course of the season. pic.twitter.com/iN7hANxest

The Mercury, led by Diana Taurasi and Skylar Diggins-Smith, quickly established a 12-3 lead in the opening minutes, leading Coach Walt Hopkins to call a timeout with 6:48 remaining. Following the timeout, the Mercury went cold from deep while the Liberty began to build momentum. New York thrived off offensive rebounds and second-chance points to quickly get back in the game.

With 3:15 remaining in the first, Kea suffered a lower left leg injury and was helped off the court but was able to put weight on her leg.

Still, the Liberty finished the first on a strong note, trailing 23-19. Holmes played a huge role in first, grabbing six rebounds to go along with nine points in seven minutes off the bench.

The second quarter was a three-point shootout. Liberty began the second with a 6-0 run, holding the Mercury scoreless up till the 7:20 mark. Phoenix responded with a quick turn around. The Liberty struggled to defend the Mercury inside and off switches.

Following a good first half by the Liberty, the Mercury, led by Diggins-Smith took over in the second half. Phoenix outscored the Liberty 23-16 in the third, scoring from all areas of the floor, heading into the final ten minutes of play with a commanding lead.

The Liberty fought hard in the final ten minutes of play but could not overcome their deficit, concluding the game with a 87-63 loss.

On a more positive note, the New York Times ran two stories Sunday on the veteran Clarendon who is having her best season statistically while becoming one of the WNBA’s leading activists, particularly on the killing of Breonna Taylor.

“At a time when Black women continue to be erased from the larger conversation of police brutality and violence, that’s why our work is particularly important,” Taylor told the Times. “While, yes, we also stand with Jacob Blake and his family and all of the men who have been murdered in this movement, it is a constant reminder of how women have to choose between erasing themselves to stand up for their race or standing up for women, standing up for their own women.”

With playoffs out of the picture, the Liberty have a tough four-game stretch remaining. Their next game is a matchup against the Los Angeles Sparks on Tuesday at 7:00 ET followed by Indiana, Washington, and Dallas.