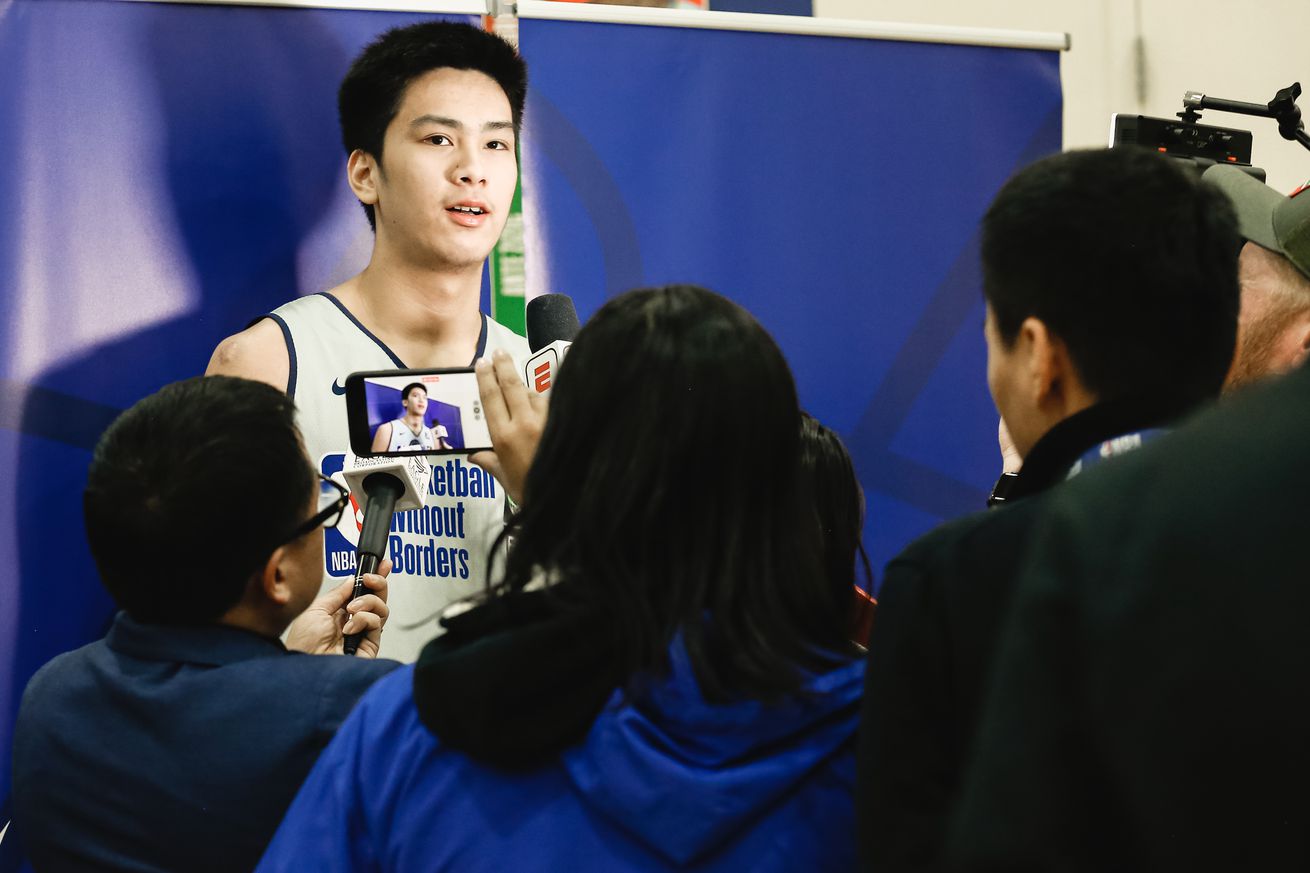 Our Ajayi Browne, a Filipino-American from Brooklyn, got a one-on-one interview last week with Kai Sotto, the Filipino phenom who’ll play for G League Ignite next season. The Philippines are full of big Nets fans, It ranks second behind only the U.S. in viewers of NetsDaily … and the Nets official site, too.

So who exactly is Kai Sotto? He’s a 7’2 Filipino phenom that can dribble, shoot, and pass with ease. The teen was also ranked 65th on ESPN’s Top 100 players for Class of 2020. In the Philippines he’s already an inspiration.

He’s also an experiment. Sotto, the pride of the Manila suburb of Las Piñas, is one of six young players —two international— who’ve been chosen for the G League Select Team which was formally named G League Ignite on Wednesday. He’s excited.

If you’re unaware of how G League Ignite works, the NBA is building a team of 18-year-old prospects who’ll play a limited schedule of G League games next season —and get paid, an alternative pathway to pursue their NBA dream.

To basketball experts like Brian Shaw, who the NBA has hired to coach the Ignite, Scotto is the second coming of Nikola Jokic.

“I think Kai, with a lot of bigs in the NBA, has the ability to play like Jokic,” said Shaw, a three time NBA champion as a player and a veteran NBA coach, after watching him There’s a lot of watch. He’s said he tries to model himself after Tim Duncan.

And he’s still growing. According to one report, he could top out at 7’6”

Besides Sotto, the other players recruited for the Walnut Creek, California-based team include Jalen Green, Jonathan Kuminga, Isaiah Todd, and Daishen Nix, all top U.S. high school players as well as Princepal Singh from India. There’s a lot of potential NBA talent there…

This G League Select Team is going to be all-time @brhoopspic.twitter.com/270KMjQagZ

They’ll benefit from the G league experience in a lot of ways. They’ll receive full scholarships to Arizona State University and get paid about half a million dollars. Then, at the end of the 2020-21 season, they, like their NCAA and international brethren, will be eligible for the NBA Draft.

The transition of playing in the Philippines to the U.S. and G League has already impacted the Filipino big man. Sotto told me he knows he’ll be scrutinized.

“My challenge here in the States is how they play. Being an international player from Asia they don’t really give you the respect right away, you have to earn it. They really have great players here. Every time I play I just have to earn everybody’s respect and play my hardest.

“For an 18-year-old player coming straight out of high school and playing in the G league is a really big thing for me, for a player like me,” Sotto told me. “I know I’m gonna be playing against great players, stronger players, and faster players so I’m just trying to get ready to be better. That’s gonna be the best way for me to improve to play against players like them, to be around an amazing coaching staff and amazing teammates. I just can’t wait.”

Other than wanting to improve, the Filipino prodigy’s journey is about pride in his country, He wants to be an athlete who the whole South East Asia can look up to. He recalled like the impact Manny Pacquiao had while he was growing up. Now a senator in the Philippines, he was the first boxer ever to win world titles in eight weight divisions.

“That’s a huge thing for me. It’s kind of unfair to compare me to Manny Pacquiao because Manny Pacquiao was the GOAT in how Manny Pacquiao affected the Philippines not just in sports but in life. Every time there is a Manny Pacquiao fight or battle, everybody just stops and watches him. I just hope that one day I could get that effect on people, on Filipinos.”

That combination of humility and pride has gotten a lot of NBA players to where they are. Some might say without the combination, success comes hard.

Sotto made his decision to forego college and go the G League route in May, two days after he turned 18. The G League, that is the NBA, recruited him. Since then, he’s been working out, getting ready for the G League season.

“There are always challenges for me every day. There are times when you feel tired and you don’t want to work out but you always remember how I love basketball. That’s how I keep working,” he said.

He said that he knows he’ll have a lot to prove, probably more than teammates Jalen Green and Jonathan Kuminga who were top high school recruits out of California and New Jersey.

Those who’ve seen Sotto, like Shaw, know that his skillset is more international than American. He was trained at an early age to play multiple positions, even though he notes that from an early age, his 6’7” father and 6’0” mother, knew he’d be very tall.

“My dad when I was still a kid he tried to teach me almost everything,” he told me. “And you know growing up watching my dad … you know my dad is a good shooter. Not now, but before, what he was. He just taught me how to shoot from all the spots and how to have easy shots, effortless. I think I improved my shooting because of him … and also because of my trainers.

“My dad always knew I was going to be this tall so he didn’t start training me as a guard. In the Philippines, I was always the tallest one. So every coach has to teach me to be a big guy. So my dad was one of the few trainers or coaches that I had who taught me ball handling, but as soon I got here, every trainer that I had taught me how to get get better in ball handling. That’s been working a lot for me.”

He said he’s spoken to his mother about college. He has that scholarship to Arizona State, guaranteed by the NBA.

“Me and my mom always talked about me studying and finishing college. She always tells me that’s going to be a big thing for me so I don’t know yet. I always wanted to pursue my education and I’m excited to know what it feels like to be a college student.”

Kai Sotto is going to be a joy to watch in the G League whenever the G League comes back. Its season was suspended in March then canceled in June. Obviously, it wasn’t the priority for the NBA that the “bubble” was.

If he fulfills his dream of making it to the NBA, he will make history in his country. Even more Filipinos will sign up to the NBA fanbase, where Filipinos are already a big deal. A fun fact: Filipinos rank second only to Americans in the number of fans who visit the Brooklyn Nets official website. Same here at NetsDaily. There is still a long way to go for Kai Sotto, but the ceiling is high. It’ll be fun to see how high he can go himself. He’s ready.

“One of the things I had the fortune of is coaching a lot of big guys, especially when they were really young,” Brian Shaw said last week. “Kai is young, and a lot of times when you grow that fast in such a young age, it takes a little bit more time to get your body and your strength and get a foundation to catch up with you.”