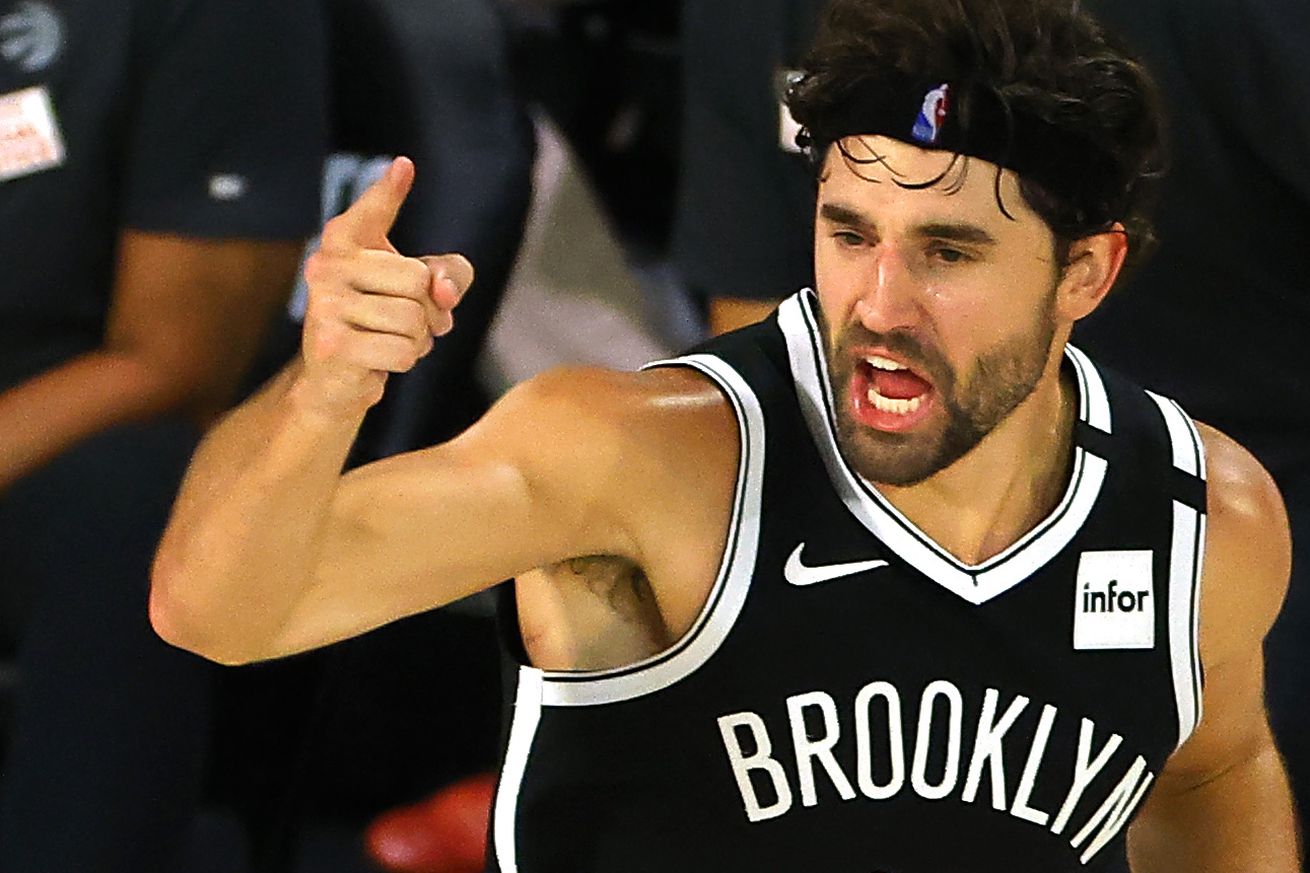 NBA free agency is approaching. Some have suggested it will start prior to the November 18 Draft. Nolan Jensen takes a look at how his growth aligns perfectly with Nets needs, but at what cost?

Entering this free agency period, Joe Harris is firmly in the driver’s seat when it comes to negotiating a lucrative extension. He’s been a bargain for the Brooklyn Nets in his tenure thus far—he deserves every penny of a shiny new contract. However, four years ago, Harris’ situation and overall future in the league looked much different … very much dimmer.

A former second-round draft pick of the Cavs, he was dealt by the team that drafted him two years later — on the very same day he underwent season-ended ankle surgery. He’s said he learned of the trade to the Magic as he came out from under anesthesia, then that he had been cut by the Orlando Magic in post-op. It was all about saving $3 million in luxury tax penalties for Cavs owner Dan Gilbert. Fair to say, Harris was not in an ideal situation in 2016.

It appeared his NBA tale was destined to be one of dejection; a fate all-too-familiar for a later round draft selection whose scouting report seemed to only highlight shortcomings, disregarding the intangibles that would later turn him into a sought-after free agent he is today.

His saving grace came in the form of a newly-minted executive trying to create something, quite literally, out of nothing.

Sean Marks took a chance on the then 24-year-old. He offered Harris a multi-year contract, and more importantly, an opportunity to grow alongside a team developing and looking to adopt an identity. Brooklyn became home for Harris; it’s where he grew into that alluring, complementary asset he is today.

He was the exact type of reclamation project that the Nets needed without the luxury of draft capital then and the type of player they need to maximize their title window now. Just four years ago he was shopped by a contender looking to avoid the luxury tax, now he’s a player you happily retain or acquire—even if it means diving head-first into tax-related penalties.

The Nets likely will not be the only bidders for Harris’ services this offseason. There are already reports —of varied credibility— that he’s going to be targeted by the Bucks, the Knicks, the Hawks, maybe the Heat. Considering the lack of star power in this upcoming free agency period, he will garner attraction in the open market. However, Brooklyn does hold a distinct advantage over suitors given they possess Harris’ Bird Rights.

In layman’s terms, they can go over the cap to retain his rights. Marks made sure to not mince words this January when discussing Brooklyn’s cap situation.

“We’re going to be a tax team. We are married to that. There’s a limited amount of times and ways you can continue to add to your team. You better do it now. You’re gearing up for a run.”

Of course, that only means so much if the team’s governor has different feelings on the matter. But that’s where there is even more good news. Joseph Tsai acknowledged and openly embraced the idea of being a tax team, telling Ian Eagle earlier in January that he is “absolutely comfortable” paying the luxury tax.

“We know the fans expect us to win a championship…if we pay luxury tax, so be it.” Tsai said specifically. “And the good thing is I believe that we do have the pieces in place.”

“Now we have some injuries and people are coming back. But the fundamental pieces are in place to perhaps go all the way, so I’m absolutely comfortable that if we pay the luxury tax that’s fine.”

Moreover, since that conversation back in January, Tsai’s net worth has grown by $3 billion, all the way up to $15.6 billion, $309 million on Friday alone. Since then, Tsai has also said he’s started to focus on his “passion,” which is sports.

Chris Milholen, my counterpart here on NetsDaily, brought up an interesting tidbit on Twitter regarding luxury teams of recent memory. Of the past 14 NBA champions, going back to Spurs in 2007, 11 of them paid the luxury tax shortly after they received the Larry O’Brien Trophy.

On June 30, 2019, the night of the “Clean Sweep,” Brooklyn announced their intentions to the rest of the NBA world. They’re looking to finally bring home that elusive O’Brien trophy to Flatbush and Atlantic. That task is made much easier with a governor that acknowledges what that entails.

In Harris, they have a reliable role player. Actually, you know what, let’s alter that a bit. They have a guy who is a star in his one role, but a guy who has also shown malleability depending on how he’s being played. He may still, to my despair, only be considered a shooter for his otherworldly efficiency hoisting up jumpers beyond the arc, but watch him play and you’ll quickly realize he’s more than that.

He’s a smart player who can adjust on the fly—he also never takes plays off. He can drive the rack if opponents run him off the line, shot 50.2 percent on 6.5 drives per game this season, or make the right read when reacting to how he’s being covered, individually, or how his opponent is defending as a team.

Though he’s proven to be a quality, efficient scorer, the 3-ball is still his calling card. His off-ball movement and overall shooting gravity is what will ignite the Nets’ half court offense. Per NBA Stats, he ran 1.38 miles per game on the offensive end last season, 19th in a league of 450 players, just ahead of Jimmy Butler. He’s constantly moving. Ask Jaylen Brown of the Celtics about what it’s like to account for our beloved Joey Buckets…

“Joe be running like he running from the police,” said Brown. “Jesus Christ. As soon as you turn your head, he gone. It was a good challenge.”

If you don’t account for Harris, if you don’t run through the off-ball screens or mirror him as he curls off of them, if you don’t keep up with the misdirections, he’s going to make you pay. Since the 2017-18 season, there is only one player in the association that has shot better than 43 percent on at least 5.0 three-point attempts per game. That man is not one of the Curry brothers. It’s Joe Harris.

This year, he stepped up as injuries plaguing the Nets’ depth chart and he proved to be a dynamic threat on the floor. But in a lesser role, in a situation where Harris is asked to operate within the flow of the offense and complement high-usage profiles (a role he’s accustomed to), that experience of commanding a larger workload should pay dividends once that load drops off next season. In short, expect him to make winning plays when called on, just to an even larger extent with even more versatility in his arsenal. He’s got some more compartments in that bag now.

Harris’ commitment to constantly improving and evolving his game is what turned him into an alluring free agent and a vital piece for a contender.

“Joe is a guy who is always in the gym. He’s always trying to get better. He’s always watching film. His maturation and his development obviously hasn’t been a huge surprise, especially for a lot of us who see him work each and every single day,” he said. “It’s especially good to see in games, but we know what Joe is capable of. We know how hard he works. It’s great to see that pay off, especially down the stretch of a game like that.”

His pre-draft scout comparison was that to Adam Haluska. Never heard of him? That’s because he never played a regular season game in the NBA. Dedication and commitment to craft often aren’t calibrated into scouting report equations—Harris is a prime example of that. Nothing came easy for him, but that willingness to always look to better his game and execute such is what makes him a perfect complementary asset in the Nets’ title window…and not, you know, Adam Haluska. (Sorry, Adam.)

Keeping Harris will not be cheap. Bobby Marks of ESPN has estimated that if the Nets don’t make a major move prior to signing him, signing Harris to a contract starting at $12 million, a 50 percent upgrade from his current deal, the Nets are looking at a luxury tax of $50 million, fifth highest ever. Add in the $5.7 million MLE every fan seemingly wants to use and the $2.4 million guarantee a first round pick would bring and you’re testing historic limits. (The Nets hold the record —$90.6 million— paid after the 2013-14 season.)

And on the other side of the ledger, if the Nets lose Harris, they’d only have that $5.7 exception to replace him … or try to develop a shooter out of the draft. Neither could be alluring for the players on the current roster.

Joey Buckets of course has said all the right things, just as Sean Marks and Joe Tsai have. Harris has indeed his expressed his desire to return, most recently saying “Definitely. Why wouldn’t you?” and Marks has said re-signing him is “priority No. 1.” Steve Nash sat down with Harris shortly after he was named head coach.