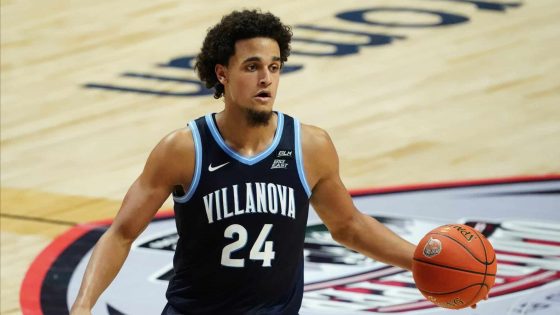 If the Brooklyn Nets hold onto their first-round pick, Villanova’s Jeremiah Robinson-Earl could be a plug-and-play forward.

Jeremiah Robinson-Earl is next in a long line of great NBA role players to emerge from Villanova. Mikal Bridges, Donte DiVincenzo, Jalen Brunson, Josh Hart, and Saddiq Bey are Wildcats who have made the successful transition.

The Brooklyn Nets should keep an eye on the 2020-21 co-Big East Player of the Year as the NBA Draft approaches. He could fill a massive hole in Brooklyn.

Brooklyn owns the 27th, 44th, and 59th picks in the 2021 NBA Draft. Let’s take a look at Robinson-Earl’s strengths, weaknesses, and potential fit in this Nets draft profile.

Without a doubt, Robinson-Earl’s defensive versatility is the best part of his game. Switching on screens and handoffs is commonplace throughout the NBA and that bodes well for Robinson-Earl.

The 6-foot-9 forward can reliably switch between all five positions on defense. In the past, he would have been labeled a “tweener” who didn’t have a natural position, but versatility is key in today’s NBA. Robinson-Earl can play the four or as a small-ball five in a switch-heavy scheme.

He’s strong enough to bang with the big boys inside or defend guards at the point of attack. Although he might not be the quickest laterally, he uses his high defensive IQ to diagnose plays early and snuff them out.

“Translatable” sounds like a bizarre way to describe a prospect’s offensive repertoire, but that’s exactly what Robinson-Earl brings to the table. Even though his three-point percentage (28%) was abysmal in his sophomore season with Villanova, he has legitimate upside as a pick-and-pop threat at the next level.

In addition to his shooting upside, he has a knack for finding the soft spots on defense. Cutting off the ball for easy buckets is something we are going to see a lot of from Robinson-Earl at the next level.

Sure, the post-up game is almost a thing of the past in the NBA, but it’s worth noting that Robinson-Earl’s size, strength, and finishing ability make him a decent post-up threat. With the continued reliance on switching everything, Robinson-Earl could punish mismatches against smaller guards when the opportunity presents itself.

As great of a defender as Robinson-Earl can become at the next level, it’s tough to see him developing into an elite rim protector. That is the one area missing from his defense. He lacks the explosiveness and length to serve as that backstop in the middle.

This doesn’t mean he can’t develop into a dynamite small-ball five in the NBA, but it limits what he can do on that end of the floor.

Again, he’s a heady, smart defender who always seems to be in the right place at the right time. Perhaps that is going to be enough, but the lack of rim protection is a concern.

With Robinson-Earl, what you see is what you get. He’s only 20, but he doesn’t have as much upside as some of the other guys in his age bracket. Again, that lack of athleticism and burst might limit him to a high-end role player on both ends of the floor.

Unless he adds something major to his game (rim protection, shot creation, three-point shooting on the move), he has a clear ceiling on his game. However, his fundamentals and versatility mean his floor is higher than other draft prospects.

Fit With The Nets

Villanova isn’t a star factory, but they produce gritty, hardworking players who thrive on playoff teams. The fact that Jay Wright has built a consistent winner at Villanova likely has a lot to do with this NBA success. Guys come into the program and learn to accept a role.

That experience tends to play well at the next level. Robinson-Earl has all the tools to follow in the footsteps of guys like Bridges and Hart.

The Nets don’t need to draft a high-upside player at pick No. 26. They have enough scoring with Kevin Durant, James Harden, and Kyrie Irving.

In fact, the area they need the most help is on defense and the glass. They employ a switch-heavy scheme and they aren’t afraid to go small for all 48 minutes. Robinson-Earl would fit like a glove on this roster, providing a little more size and physicality than Bruce Brown did in this exact role.

If the Nets hold onto this pick, Robinson-Earl is a prospect they should give strong consideration. He could be an absolute steal for whichever contender nabs him at the end of the first round.

Robinson-Earl to the Nets is a popular pick on NBA mock drafts.