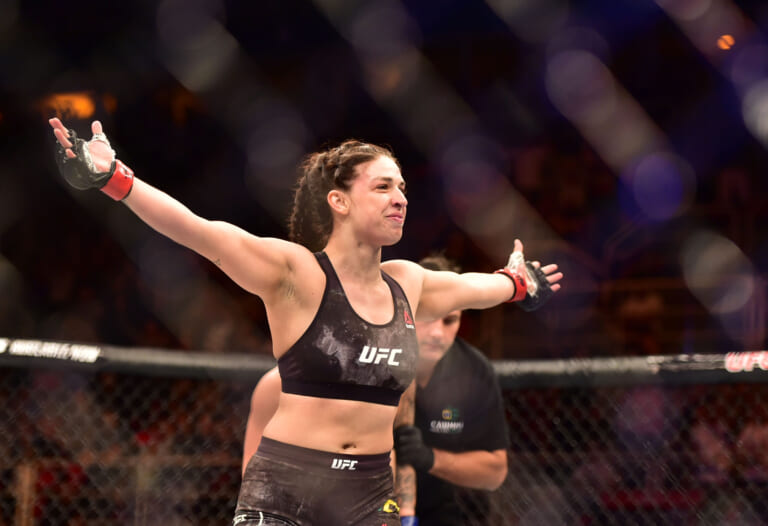 This past Saturday in the main event of UFC Vegas 39, we saw a pivotal matchup in the strawweight division. Top contenders battled it out as Mackenzie Dern (11-2) took on Marina Rodriguez (15-1-2).

Heading into the matchup, the path to victory seemed relatively clear for both ladies. For Dern, she was going to need to get the fight to the ground. She arguably has the best jiu-jitsu out of any female fighter in the UFC.

She has improved striking, but Rodriguez is so much more seasoned on the feet. Rodriguez needed to keep the fight standing where she was going to have a massive advantage, especially from range.

One of the things that concerned me about Dern going into the fight was her takedowns. Despite all of her submission wins, Dern is not effective at all with her takedowns. Coming into UFC Vegas 39, she was only succeeding at a 10% clip.

While the fight did touch the mat a few times on Saturday, Dern’s inability to take the fight down ended up being her downfall. Rodriguez controlled most of the fight on the feet and survived the grappling exchanges to win a decision.

What’s next after UFC Vegas 39?

For Dern, this fight is a reset. The surging contender had won four fights in a row and she was looking to become the star that the UFC believes she can be. As mentioned, she’s becoming more well-rounded, but she’s still a little too one-dimensional.

If Dern can become a fighter who’s dangerous with takedowns, she can easily become a world champion. Now that her winning streak is snapped, who should be next for Mackenzie Dern?

Well, one fighter I like for Dern is a little down the rankings in Tecia Torres (13-5). Torres is just inside the top ten and she’s won three fights in a row. She’s been begging the UFC for a top contender and I think Dern fits the bill.

She showed great striking in her last fight, but she’s been known throughout her career for her wrestling. It would be an interesting stylistic matchup and it would be fun to see how both ladies would approach it. For Dern, it would be the slight step back she needs while still taking on a tough customer.

The post After falling short at UFC Vegas 39, what’s next for Mackenzie Dern? appeared first on Empire Sports Media.