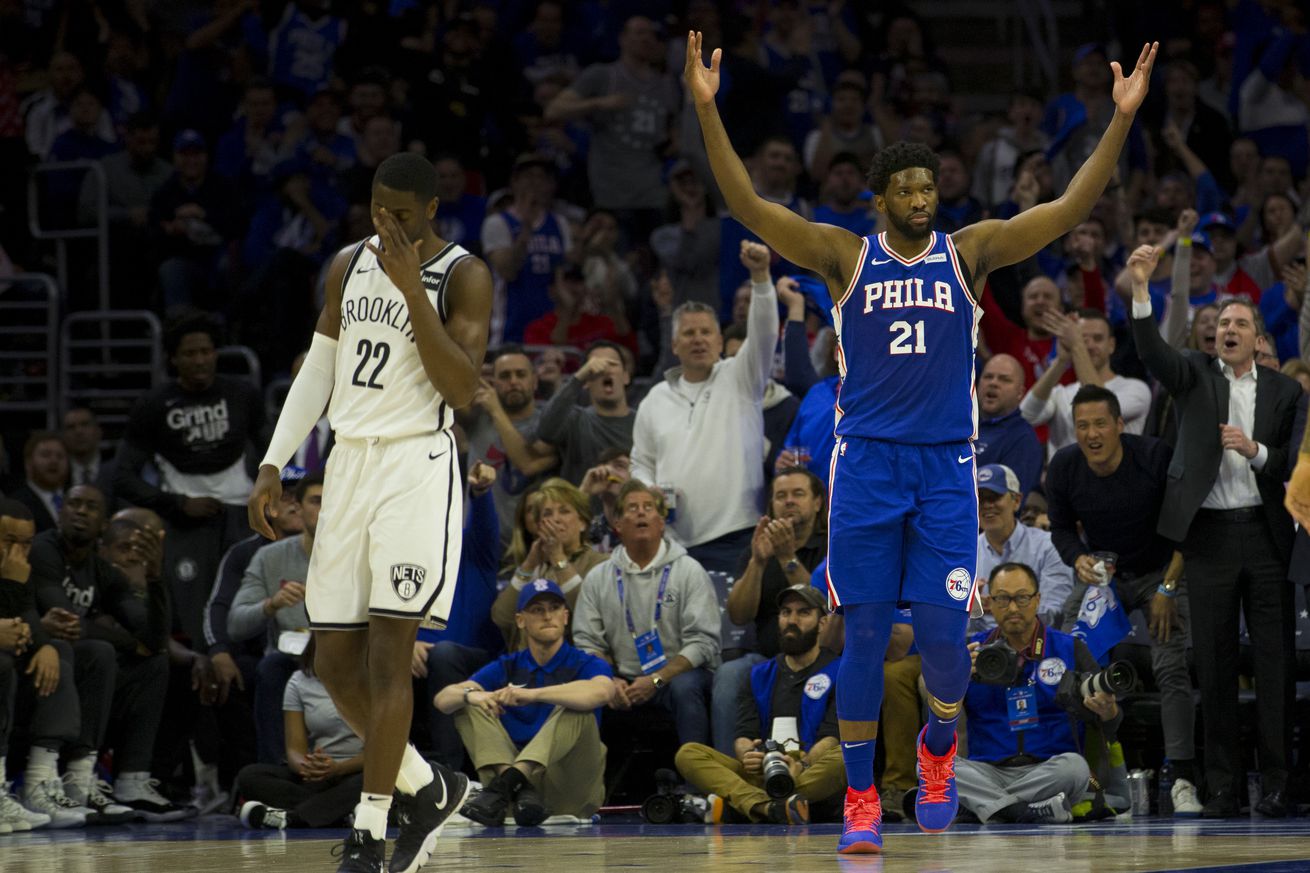 He spoke it into existence. Literally.

Embiid scored 11 points in the midst of a 21-2 Philadelphia run to start the second half. He finished with 23 points and 10 rebounds in 21 minutes. The Nets trailed 65-64 at half. By time Embiid and the Sixers’ run was over, the Nets trailed by 20.

Here’s the thing, though. Embiid absolutely clocked Jarrett Allen in the second quarter with an elbow that probably should’ve been a Flagrant 2 and ejection. Instead, it was a Flagrant 1 and he continued to torch the Nets. You can argue that it saved the Sixers’ season.

And that call might have just saved the 76ers season. https://t.co/oQUYmNAJre

And another ESPN and YES Network analyst…

This clearly was a Flagrant 2. https://t.co/eb2sSIYPlE

And it should be noted, this is not an isolated incident.

In past two seasons, Joel Embiid has had seven flagrants called on him, tied with Russell Westbrook for the most over that span. You would think that matters to the refs and that they would take that into consideration when determining whether it’s a 1 or a 2. But no.

Post-game, Embiid claimed the foul was unintentional but he and Ben Simmons could barely hold it together.

Ben Simmons and Embiid can’t hold it together when they were asked about Embiid’s technical on Jarrett Allen pic.twitter.com/hDbVHLH36c

“I wasn’t surprised (I got a Flagrant 1). I saw the replay. Obviously it wasn’t intentional. I got him pretty good and I’m sorry about it,” Embiid said before taking a 10-second break for laughter. “OK. I’m sorry about it. It wasn’t intentional. It’s just trying to be aggressive. I’m not usually humble. That’s why (Simmons) is laughing. But, uh, yeah, I was trying to be aggressive.”

So it went. The third quarter, which has often been a saving grace for the Nets, was instead a roaring disaster.

Not that it might’ve changed much, but Kenny Atkinson didn’t call a timeout until the Sixers hit the 21-2 mark in the third. With a young team like the Nets and a hostile crowd like Philly, you simply cannot wait that long.

They needed to find a way to stop the bleeding. Atkinson had no answers and the Nets as a whole had no answers the entire night. They made a small push and brought it within 15, but the Sixers answered with a 15-6 run and took a 26-point lead.

Ben Simmons finished with a triple double and at times looked unstoppable as he racked up 18 points, 10 rebounds and 12 assists. J.J. Redick, who was just 2-of-7 in Game One, finished with 17 points on 7-of-12 shooting. Tobias Harris scored four points in 41 minutes on Saturday. He finished with 19 points on Monday. Like most bigs against the Nets, Boban Marjanovic was a force with 16 points and eight rebounds off the bench.

Rebounding was a big issue post-game for Kenny Atkinson.

“They dominated us in the paint, dominated in on the boards,” said Atkinson, who said he thought Allen showed some improvement.

“Not just him. As a team we did not rebound. The first team did not rebound. And we’ve got to pick that up. If we don’t find a solution to our rebounding woes, it’s going to be over quick. It’s on Jarrett to pick it up, and it’s on the rest of those guys, too.”

One big issue was that Ed Davis found himself in early foul trouble. Instead of the 12 and 16 game he put up in Game 1, he finished with two points and one rebound Monday night. Davis who had been questionable before the game with a right ankle issue ultimately played only five minutes as Atkinson decided to rest him.

The Sixers as a whole shot 56 percent from the field and out-rebounded the Nets 49-32. Brooklyn was led by Spencer Dinwiddie off the bench (16 points), but the starters combined for just 43 points on 15-of-38 shooting — 16 of the points coming from D’Angelo Russell.

Joe Harris was particularly ineffective as Philly keyed in on him. The NBA’s leading three-point shooter finished 0-of-2 from beyond the arc, scoring only four points on the night.

And this is why Atkinson continues to preach a humble demeanor. The Nets did their part in stealing Game One, but the Sixers answered the call and tied this series at one apiece heading to Brooklyn. Key words: Heading to Brooklyn.

“I know the Barclays Center is gonna be jumping there… The buzz around the city is what we need, we need that atmosphere, we need that intensity to be up like that,” D’Angelo Russell said.

“Look on the positive side. They came back, they played a heck of a game—it’s 1-1. We go back to Brooklyn. The old story, if you would’ve told us before we’re splitting here in Philly, I think we’d be happy. But [I’m] not pleased with the way we presented ourselves tonight.

The first win was great, but nobody is celebrating. If Embiid is playing like “Superman” and the others step up the way they did, it’s going to be a long series.

The Nets trailed 65-64 at half, despite being out-bounded by 10 and Philly shooting 51% with four players in double figures. It was a resilient effort from a group that trailed by as many as 13. The key? They exploited their mismatches and matched a franchise record for three-pointers in a first half playoff game with 10 on 23 attempts.

… Then they followed up with their worst quarter of the season.

Following a Game One loss to the Nets, Sixers guard Ben Simmons expressed his displeasure with Sixers’ faithful, who decided to boo him throughout the night as he missed free throw after free throw.

But wait! Simmons had an entirely different perspective before Game Two started, saying he loves Sixer fans and their commitment to the team.

“It’s Philly. That’s what’s going to happen. I love it. That’s how Philly is. If you can’t play here, you can’t. They’re going to give you s—, they talk s—, it is what it is. If you’re not playing well, they’re going to let you know, but I love being here. I love the fans here. I wouldn’t want to be in a place where they didn’t really care or only showed up when times are going well.”

I wrote a feature piece for SNY on the recovery of Caris LeVert and why he’s the X-factor the series. Here were some key quotes from his teammates and coach.

DeMarre Carroll: “When he got hurt, he didn’t cry about it. He wasn’t whining to nobody. He just got back in the gym,” Carroll said. “I think it shows the maturity in him as a person that he was able to come back the way he did.”

Jared Dudley: “Man, when you get hurt like that, things are in your head, you worry about the injury or you’re worried about getting injured again. But with Caris, he’s not a shooter; he’s a scorer. He drove the lane which set up his jump shot. It’s gonna help us going forward in this series.”

Read more here. His return feels miraculous to begin with and he couldn’t have gotten hotter at a better time.

RODI NOT SCARED OF BEN

Rodions Kurucs on Ben Simmons, per Michael Scotto: “He plays hard, and I play hard. Also, I don’t like that he said in the media that JD (Jared Dudley) is guarding him and ‘that kid.’ Now, I want to let him know that he knows my name. I’ll play hard. I’ll go at him, and I’m not scared of him.”

“I wouldn’t give him the enforcer title, but Rodi’s definitely a tough guy. From the first day in pick-up I knew that he was tough. It’s somebody you definitely want on your team, you don’t wanna play against.”

Kurucs finished with eight points and five rebounds in 21 rebounds Monday after going scoreless in his first playoff game.

Aside from the crew of Nets fans out in Philly for Game One, a bunch of fans went to the bar and supported alongside one another. This is old news, but it’s good news nonetheless. The Nets are still in the process of growing a fanbase and seeing this shows that people DO care about this team. We know it. Others will find out S0:0N.

And a few made it to Philly.

We got a swarm of Nets fans behind courtside tonight! pic.twitter.com/xnp4Nk5MTm

Game 3 will be played on Thursday at 8 pm ET. Brooklyn, you ready?!

For a different perspective, head over to Liberty Ballers, our 76ers sister site on SB Nation.