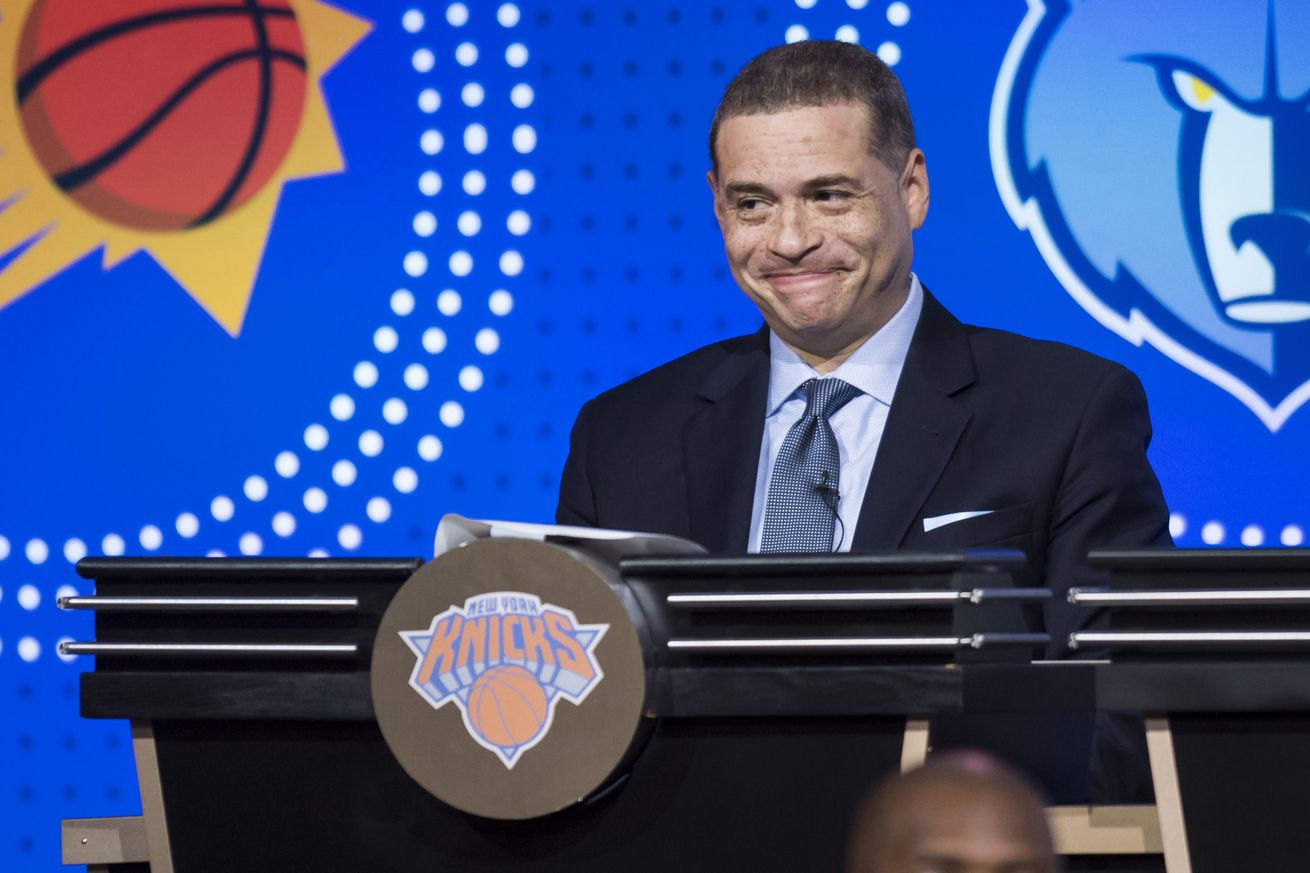 This year New York has a 14 percent chance to win the draft lottery. If you’ve ever rooted for the Knicks before, the truth is they actually have an 86 percent chance to pick elsewhere. This isn’t a glass half full/empty situation. It’s not even a has a splash vs. looks full to me situation. It’s a how do you survive with such little water when there’s a drought coming? situation. Zion Williamson is the only drink that will quench this draft’s thirst. Every pick after Zion is a Ewing-esque drop step dramatically out of the HOV lane.

No matter what draft expert or enthusiast you trust, they probably have a different picks 2-5, a very different lottery projection and an unrecognizable rest of the first round. Let’s not even speak of the second round! It’ll twist your wig. With that in mind, when the Knicks inevitably get the fourth or fifth pick at the lottery, does it make sense for them to package that for some lower and/or future picks? If there’s no one you trust, or conversely plenty of prospects you trust, the math alone could work in your favor both long-term and for the immediate cap concerns.

So have a look at a few popular mock drafts and big boards. First we have the lovely Tankathon top ten.

Next let’s have a gander at the NBA Draft dot net folks.

Jonathan Wasserman at Bleacher Report has a new mock that has few names not mentioned in those two. The order is almost completely different. Then the DraftExpress guys, although similar to Wasserman’s, have another order all to themselves. CBS Sports has a name we haven’t seen. The guys over at The Stepien don’t have a mock, but their rankings imply yet another sense of who is the top talent. SB Nation’s own Ricky O’Donnell has a certain gangly Duck in the top five. The complete idiot’s guide to the top ten that I crafted in my spare time barely resembles any of these!

Obviously, Zion is the prize. If you can get him, you get him and you don’t look back. If there’s a way to trade up, you put the pick, Dennis Smith Jr., Kevin Knox, Damyean Dotson and Luke Kornet in the deal and get Zion Williamson damn it! It’s a shame no one in the lottery will bite on a gristly trade like that.

Barring this 86 percent unexpected result, it might behoove the Knicks to kick the can down the aisle a ways. Maybe they can hide two special ingredients behind a chewy protein. Multiple selections that come later may look bad on face value; the optics imply you’re missing out on a marquee name. The thing is, you get multiple whacks at unearthing a diamond, and it can be an easy way to slap a glop of cap space onto the ledger at the same time.

Have a look at the cap as it stands, with a little future projection. It does not take into account the top five pick or the 55th pick that are headed this way.

Obviously that $7.3m will get swallowed up. The tricky thing is figuring out how to get the most bang per buck. Now take a look at the rookie scale salaries and see if you think there are ways to snag a couple two, three youngsters that could provide a stronger balance to the roster.

International prospects Goga Bitadze and Sekou Doumbouya have generated some top-of-the-charts buzz, but could be available later in the lotto. So perhaps the Knicks can draft-and-stash, although that seems unlikely. Maybe they can shed a small chunk of the salary by moving down. So the logical question becomes: What teams actually have picks to spare?

There are plenty of permutations to trading back. To do it all in this draft may require a pluperfect set of circumstances. Future picks have got to be in play for teams that think now is the time to strike. There’s no reason to smush it all together. On top of that, the Knicks contingency plan for not getting superstars has to be adding as much young talent as possible. With only one cornerstone, this is the year to wade out to the deep end, looking for a gemstone, no matter what happens in free agency.

It’s hard for me to believe that there is a path to Zion. When have the Knicks not delivered a deep and aching sorrow? This draft is full of talented players and they’ll be ripe for the picking if Scott Perry runs the draft adroitly.