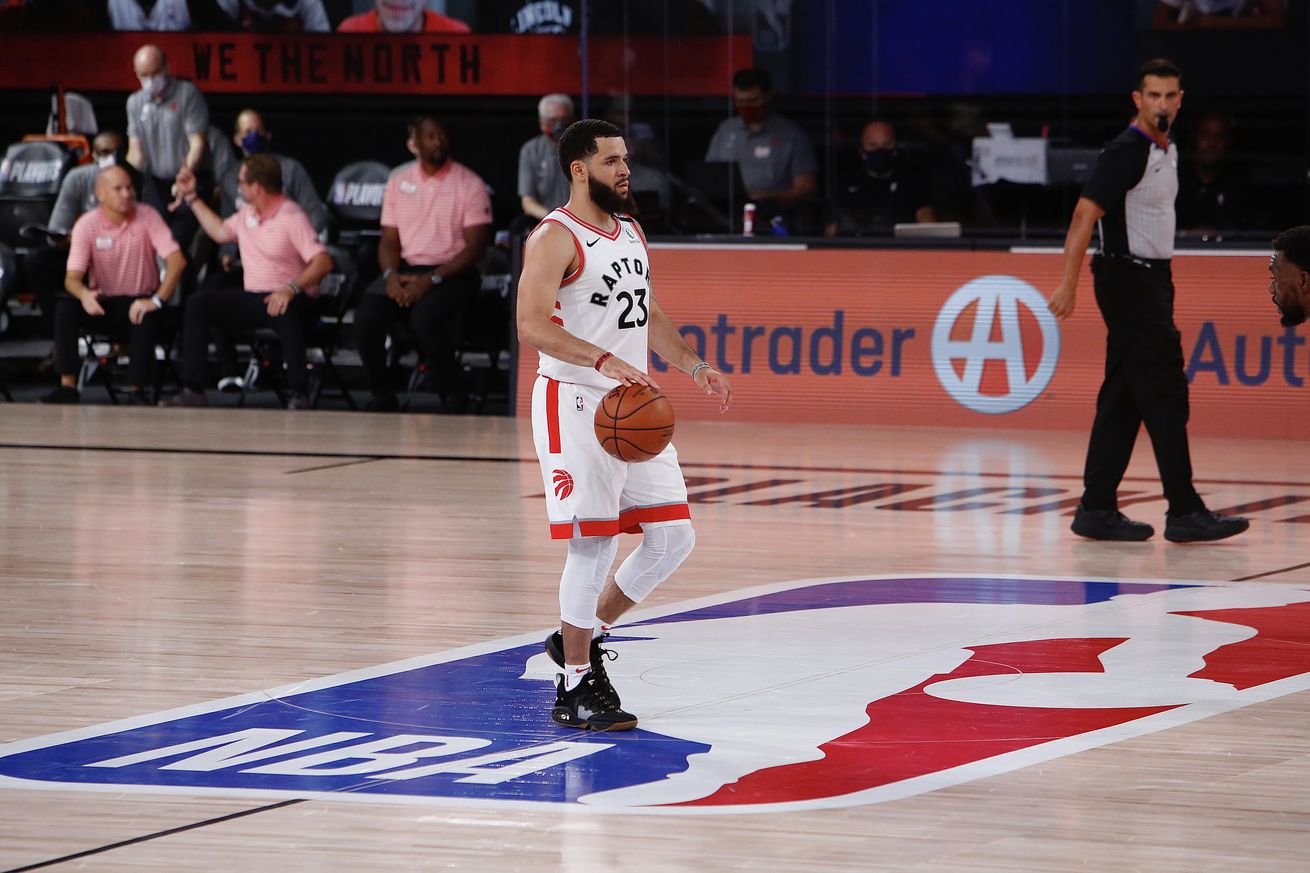 The positives: VanVleet had a great year for the Raptors, helping Pascal Siakam fill the Kawhi Leonard-sized void left when Leonard bolted to go team up with Way-off P in Los Angeles.

You might look up at those shooting stats above and think, “No big deal, he didn’t really show any growth this year; in fact, he shot 0.3% WORSE from deep! What a bum!” But in fact, VanVleet took on a way bigger role in the offense, and his shooting volume was higher than ever before: over his four-year career, his shots per game have increased from 3.0, to 7.2, to 9.4, to a whopping 14.3 this year. Being able to replicate nearly 40% shooting from three on volume (6.9 of those 14.3 attempts per game were from three) is no small feat, especially considering the added attention VanVleet was given by opposing defenses once he stepped into the bigger role.

He’ll probably cost a pretty penny to pry away from the Raptors, as he’s also a dogged defender and a solid passer. Really, he’s just a talented, smart basketball player that has overcome his less-than-ideal size (6-foot-1) to carve out a role for himself as one of the better combo guards in the NBA. Signing him also shouldn’t stymy the development of Frank Ntilikina, Dennis Smith Jr., or [insert drafted point guard here], because he showed time and time again with the Raptors that he can play on- or off-ball with Kyle Lowry.

The negatives: Did I mention that he’s undersized? So yeah, here’s the thing, that’s kind of a detriment in many ways, especially if he’s going to be thrust into the role of “de facto star” by the Knicks.

VanVleet shot just 55% at the rim and sub-35% from every other distance inside the 3-point line. Toronto all in all wasn’t great at getting to the rim or shooting there (they shot 61.1% there, barely better than last year’s Knicks) and relied heavily on the three, which predictably bit them in the butt when defenses tightened up in the postseason.

The Knicks have a new coach in Tom Thibodeau and a seemingly great new staff under him, which should in theory create an environment where VanVleet could play a role similar to what he did in Toronto — an elite secondary (or even tertiary) player. Unfortunately, this is the Knicks, and we’ve seen far too many times where a player is signed or traded for and asked to do entirely too much, amplifying all of their flaws while burying their utility.

Yes, but as with any free agent signing, it all comes down to the dollars and cents. There’s a hard cap the Knicks should put on how much they’re willing to spend on VanVleet, because the reality is, they should be looking at mid-season trades for him every season that he spends on the team (as ShwinnyPooh recently outlined over at The Strickland). If you can keep his cap hit around $22-23 million, that’s probably a movable deal down the line that could net you positive assets from a shooting-starved contender, as long as the scenario listed in the “negatives” above doesn’t play out and he doesn’t start shooting 25% from deep the second he puts on the orange and blue.

On top of his trade value, he’s still young in NBA service time and has shown improvement every year of his career with more and more responsibility thrust on him, and his time in Toronto with Kyle Lowry showed that he can be an asset in playing with and developing whatever other young guards the Knicks have, rather than a detriment (which, as good as he is, could definitely be said of Chris Paul if he was acquired).