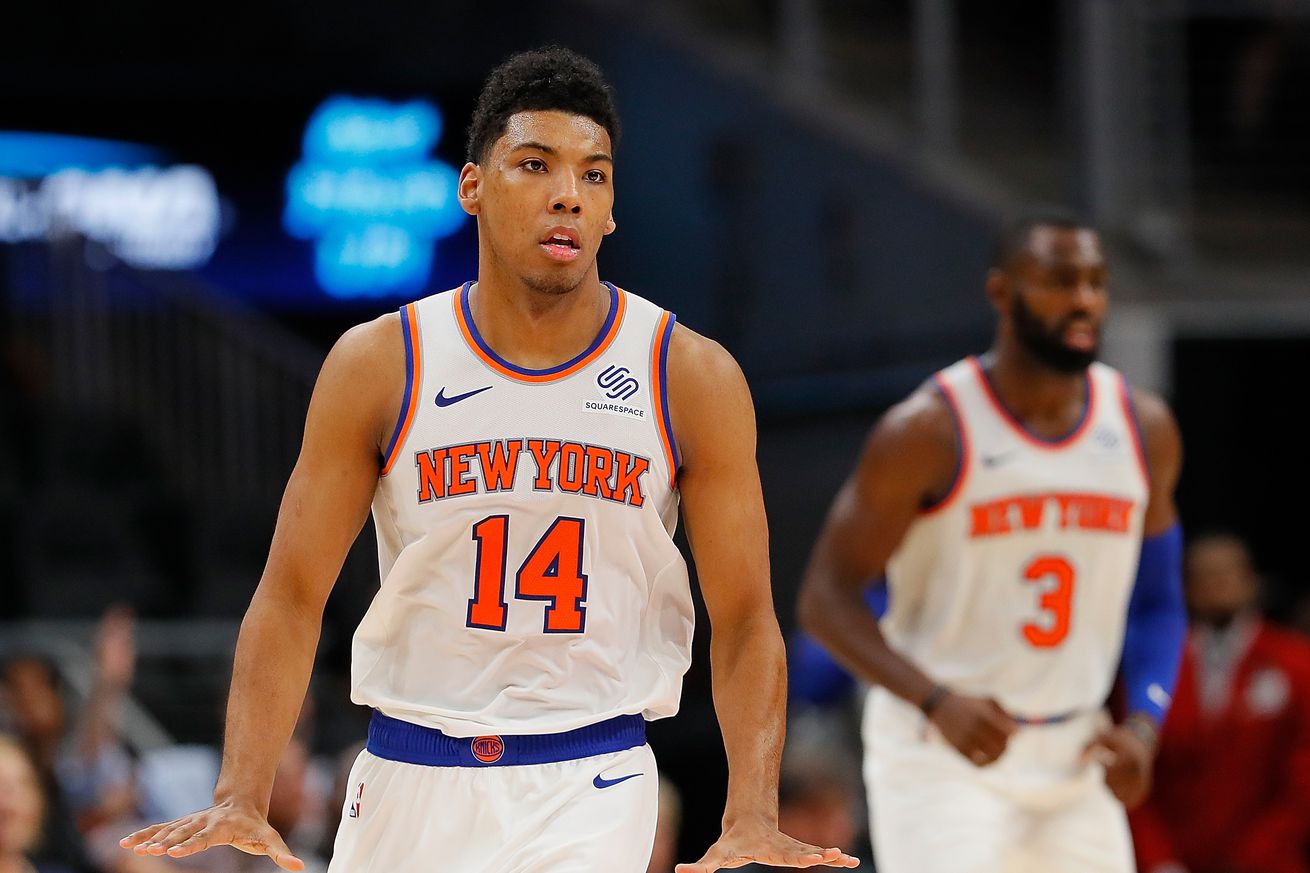 Is this truly troublesome, or just unavoidable drama after a lost season?

Although the regular season is mercifully over, the drama surrounding New York’s only playoff-less basketball team never ends, with the New York Post reporting on Monday that some Knicks did not enjoy playing with Allonzo Trier this year because of his iso-heavy style of play.

The report came by way of Marc Berman, who started his story by quoting Trier as saying he is “absolutely” hoping the Knicks can nab Kevin Durant as a free agent this summer. Trier and Durant are close, you see, as the man they call Iso Zo hails from Seattle, which drafted Durant back when the city had a professional basketball team.

However, only a couple of paragraphs in, Berman cited “multiple sources connected to the Knicks” as saying that Trier was somewhat unpopular in the locker room this year, especially among certain veteran teammates.

“His play on the court was cancerous,” one NBA source said, per Berman. “A lot of guys didn’t like the way he didn’t play team ball. He cared about himself too much. He looked guys off who were open.”

Ouch. Lest you think these reports are baseless, Berman brought a few receipts. For instance, he pointed to a late November game in Detroit, in which Trier at one point failed to find Trey Burke up court for what could have been an easy layup. Instead, he dribbled the ball up the court himself and drove, drawing both a foul and some scorn from his teammates on the bench.

Interestingly, Trier had a terrific overall game against the Pistons that night.

Then there was a late January game against the Houston Rockets, when Tim Hardaway Jr. became visibly agitated and admonished Trier for turning it over instead of passing to him on a fast break. Hardaway Jr. and Trier also clashed after that game, when Trier took to social media to defend himself against a defensive lapse that led to a wide open Eric Gordon three.

The report went on to cite “another NBA source familiar with the situation” as saying that Trier was often one of the last players picked when the Knicks were choosing teams for pickup games before or after practice.

“The Knicks players wanted to play with guys who passed to the open man,” Berman wrote.

Being one of the last picks is never fun, but it’s not totally clear whether this report is something that should be taken too seriously. Importantly, the report said that Trier “got along swimmingly” with fellow first years Kevin Knox and Mitchell Robinson, which are two of a select few players on the team that can comfortably be penciled in as being here next season.

To recap: Trier did not get along so well with Burke and Hardaway Jr., who were both shipped out of town midway through the season. Meanwhile, he has no such problems with Knox and Robinson, who are, supposedly, major parts of the team’s future. We don’t know what all the other players thought, nor do we know which players were the ones who picked Trier close to last when the team was planning pickup games.

Still, we should dig into the stats to see just how big of an iso problem Trier has.

Trier had 78 total possessions classified as isolation plays in the 64 games he appeared in, according to stats.NBA.com. He isolated 10.6% of the time, averaging 1 point per play and shooting 45.8 percent from the field while having a turnover rate of 6.4%.

For comparison, James Harden iso’d 1,280 times, or 48.7% of the time. Harden averaged 1.11 points per play, shot 40.1 percent from the field and had a 7.2 percent turnover rate. Harden is obviously far more responsible for the Rockets overall offense, of course, so let’s look at someone who carried less of a load and can therefore be better compared to Trier.

How about Derrick Rose (#OAKAAK), whose role on the Minnesota Timberwolves can be somewhat likened to what Trier was asked to do for the Knicks this year. Rose iso’d 112 times in 51 games, or 12.5 percent of the time. He averaged 1.07 points per play, shot 50 percent from the field, and had a turnover rate of 9.8 percent.

The point here isn’t to say that Trier is anywhere near as good as Harden, or even Rose for that matter, who had a pretty impressive season. He could be good enough to be among the league’s stars at some point in the future, but for now he’s just a 23-year-old going into his second NBA season. Instead, the above iso stats illustrate that Trier is clearly a competent isolation player, as his numbers don’t scream ‘for the love of all that is holy stop isolating!’

Although it’s obvious to anyone who consistently watched the Knicks this year that Trier could improve by putting his head down less and being more open to kicking it out once the defense collapses on his drives, the fact is that Trier is in his early 20s and just got into the league. His tendencies can still be tweaked, and with the right coaching and mentoring, Trier has the potential to become a truly dangerous player on offense. Ball movement is one of the keys to success in this league, but so is having players with the ability to break down the defense via fancy dribbling.

Trier may have averaged just 1.9 assists per game this season, but he had at least four assists on 11 separate occasions, and has displayed the ability to rack up a significant amount of dimes at times. The reality is that Trier is young, and everyone, including his teammates, should be hopeful that he’ll show the necessary improvement in year two.