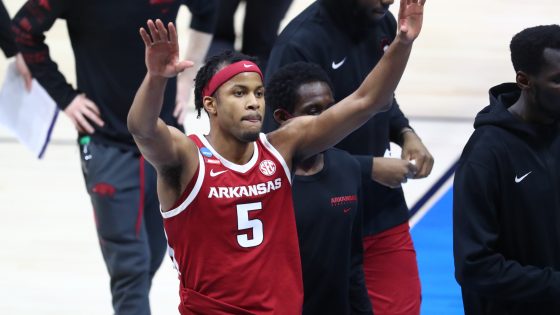 Moses Moody is a 3-and-D wing with tremendous upside and a connection to New York Knicks head coach Tom Thibodeau.

The New York Knicks are playing their cards close to the chest when it comes to the 2021 NBA Draft. If they decide to package picks and trade up, Arkansas guard Moses Moody could be a target.

Moody, 19, is a young prospect with potential as a 3-and-D stud at the next level, but his upside extends further than that.

New York owns the 19th, 21st, 32nd, and 58th picks in the 2021 NBA Draft. Let’s take a look at Moody’s strengths, weaknesses, and potential fit in this Knicks draft profile.

Moody is exactly the type of defender who can thrive on the Knicks or any NBA team for that matter. He has the potential to become an elite one-on-one defender at the next level due to his length and defensive IQ.

His 6-foot-6 frame and 7-foot wingspan give him an advantage over smaller guards. This length also allows him to switch between multiple positions. Moody has a strong feel for team defense as well, making him a strong off-ball defender.

Again, his length helps in this regard because it gives him a little extra as a help defender. Blocks and deflections are par for the course with Moody.

Moody is already a strong three-point shooter and that shooting should translate well to the NBA. He is strong as a catch-and-shoot threat off of movement or on kick-outs. With potentially elite defense and a reliable three-point shot, there is a place for Moody in The Association.

This is an area where Moody struggles. As a finisher inside, he lacks the strength to finish through contact. Shot blockers tend to give him trouble inside as well. When he has trouble going through contact and over shot blockers, that leaves him few options when he gets into the paint.

Of course, he’s 19 and has time to grow into his body, but he struggled inside against college players. It’s going to be much more difficult when he’s going up against grown men in the NBA.

This dovetails in nicely with Moody’s lack of an inside presence. Although he flashes playmaking chops and vision from time to time, he still needs to improve as a shot creator (both for himself and others).

Moody posted a 1:1 assist to turnover ratio during his freshman season at Arkansas. Becoming a smarter passer could help open up his inside game as well. Being unpredictable as a penetrator is crucial to keeping defenses on their toes.

Fit With The Knicks

Moody might have the most interesting connection to Tom Thibodeau of any prospect in this class. Bill Musselman was a legendary coach who served as Thibodeau’s first mentor during his days with the Minnesota Timberwolves.

Unfortunately, Bill Musselman passed away from cancer in 2000, but his coaching legacy lives on in two places. One is in New York with Thibs. The other is in Fayetteville, Arkansas with his son, Eric. There’s no doubt that Eric Musselman is providing the Knicks with good intel on Moody.

Tom Thibodeau, head coach of the @nyknicks has a .589 winning percentage as an
NBA head coach. He always reverts back to five core values: rebounding, defense, low turnovers, sharing the ball and using the paint as a fundamental weapon.

Thanks Coach Thibodeau! Can’t wait to watch the culture you build with the Knicks. Thanks for the mask and gear @nyknicks #MaskUp pic.twitter.com/AiXPdT1EAm

Moody seems like the perfect prospect for the Knicks. At worst, he will be a 3-and-D wing who can contribute to winning. At best, he could develop into an elite defender and a top-three offensive option on a contender. Add in the Thibs-Musselman connection and this feels like a match made in heaven.

With all that said, Moody is a potential lottery pick who won’t fall to the Knicks at 19 or 21. That leaves a trade-up as the most realistic path for Moody to become a Knick. Nothing is out of the question at this point in time, but the chances of Moody coming to New York are slim.