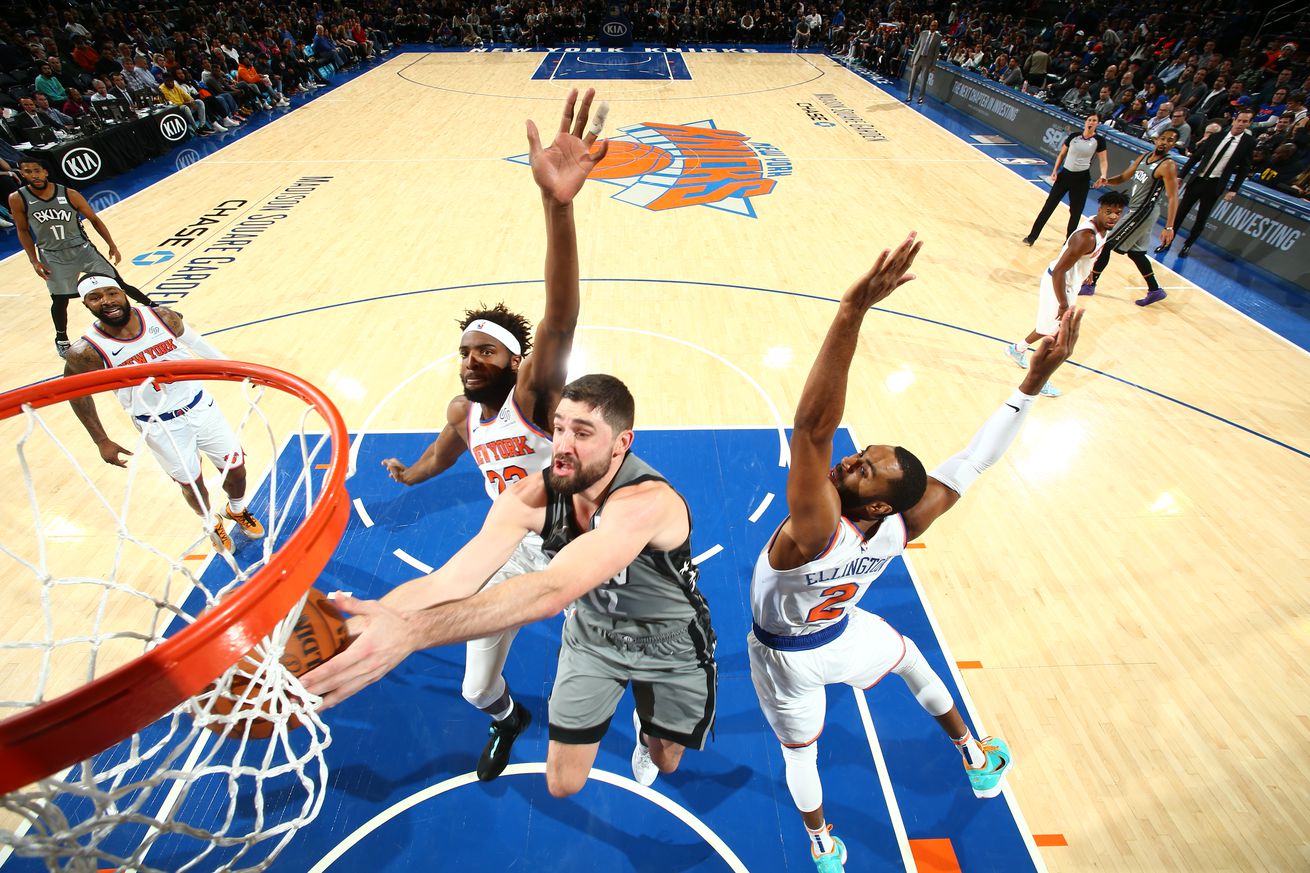 The last time the Knicks were good, they were 13-4 after 17 games. On December 5, 2012 they rode a not-fake comeback to a 100-98 win over the Charlotte Hornets. Carmelo Anthony led the way with 23. Tyson Chandler had 18 and 17. Ronnie Brewer started that night. So did Kurt Thomas.

Kevin Knox will start for RJ Barrett tonight (illness). Fizdale just talked about pushing Knox to get better defensively. Now Knox will have to defend 2s and on the perimeter, which has been arduous task for him so far this season. https://t.co/cVlSPv5CaY

How would Knox make out in his strange new world? Why was Knox in his strange new world rather than Damyean Dotson or Wayne Ellington? What are the odds of an NBA team getting repeatedly blown out at home? How could the Knicks stumble out of the gate yet again, trailing by 14 in the first quarter? Could Julius Randle find a new way to disappoint Knick fans beyond the turnovers and shot selection? Would you believe yes, he could?

Kevin Knox with the chase-down block on Dzanan Musa. Problem for the Knicks is that the Nets still score. They’re up 46-35 on the Knicks in the 2nd quarter. pic.twitter.com/1MRLcrb1kL

How many shots could Marcus Morris hit in a row? Four? Five? Six? Seven? When the seventh tied it at 61, would some other Knick grab the baton and pull them in front? Does a team making 18-of-35 three-pointers overcome 16 turnovers through three quarters and a 34-to-16 free throw disparity? How was this game ever close with the number of clean looks Nets’ sharpshooter Joe Harris got?

Was is it worth it for David Fizdale to win his coach’s challenge getting Mitchell Robinson’s sixth foul overturned, given that right after that Robinson was challenged and bested by Spencer Dinwiddie on a lefty finish, then fouled out (on a bullshit call on a high switch) and got called for a technical foul (on another bullshit call)? How bad are a referee’s calls when Mike Breen of all people is calling them out? Will Ntilikina deliver the next time he’s up in the big moment?

I think if Frank Ntilikina hits this open 3 then the MSG crowd has a meltdown. Nonetheless, Knicks down 101-97 with 42.1 seconds remaining. Marcus Morris has sustained them and Wayne Ellington came off the bench for good minutes and shooting. pic.twitter.com/ALUm196FBU

Did you believe, or did you wanna believe, that this was one of those come-from-behind happily ever afters you want as badly now as every other happily ever after in every other lost year? Why else would you be here, if you weren’t? But you knew, yes? When? While it could have been the Joe Harris bucket in close, it was Dinwiddie, wasn’t it? How often is one guy the coffin and the nail?

Spencer Dinwiddie goes off for 30 PTS, 4 AST, and 40.8 FPTS in the @BrooklynNets win over NYK! pic.twitter.com/P3wtqbj0bI

He’s cutting and rolling less, still posting up a bunch, and spotting up and isolating a ton, too. He’s on some continuum of being asked to take a greater number of lesser-quality shots and looking for them himself. He’s literally being put in positions to fail.

Now consider the coach’s dilemma: last season wasn’t about establishing a style of play, it was about throwing rookies in the river to see if they’d sink and not-trying for Zion. The organization probably assumed they were getting Kevin Durant and Kyrie Irving, two brilliant offenses unto themselves. Randle’s the only player on the roster to average 20 a night in the Association, so Fizdale sends him out there knowing he’s going to crash and burn in a system-less wonderland.

This paragraph is a simplification, hopefully one with intent: the above realities are the sorts of truths front office people learn to forget about when saving their own necks. Does this point make sense? I got a bad headache tonight.

Quoth Amares Bloodied hand: “Another day. Another loss.” That’s the spirit! Every loss gets you one L closer to the next W. Next game is Wednesday in Toronto. It can’t end in a tie, so see you then for an ending of some sort.