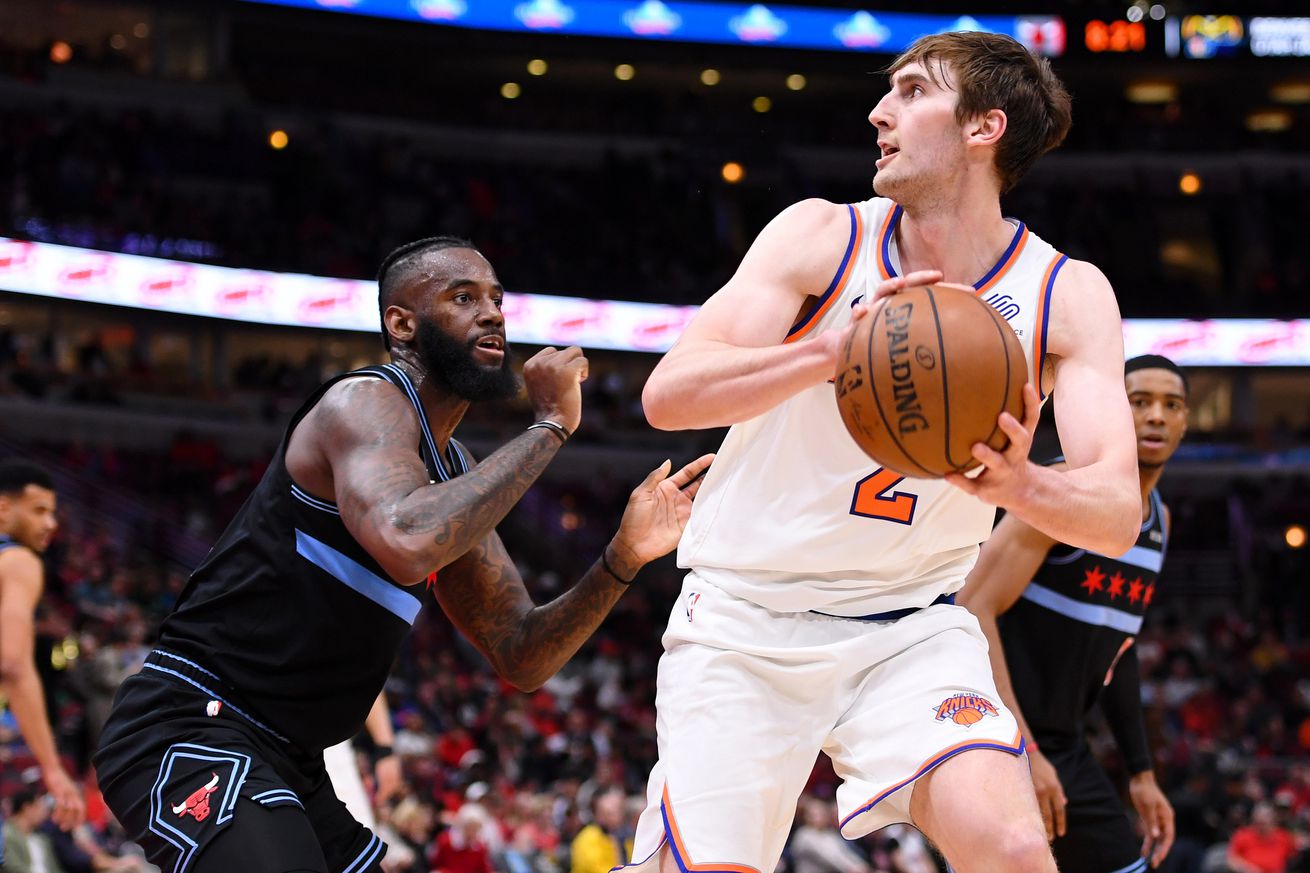 NOT THE WORST TEAM IN FRANCHISE HISTORY!!!

But some wins always feel good, and New York’s 96-86 wire-to-wire win over Chicago hit the trifecta: it spared them the indignity of setting a franchise record for fewest wins in a season, snapped their nine-game road losing streak and pushed the Bulls one defeat away from their first 60-loss season since their first three full post-Jordan campaigns.

From the jump the Knicks’ vibe was footloose and fancy-free.

They hit five of their first six shots, forcing a Bulls’ timeout less than three minutes in; not long after they led 35-15, looking very much like a team that smelled the finish line near the end of the longest season of their lives. Dennis Smith Jr. had himself quite a quarter. If you, like me, have short-term memory issues and have recently found yourself wondering “Is DSJ as intriguing a talent as I seem to remember?”, tonight was a good refresher. He scored 11 in the first, as did Kevin Knox. But the star of the opening frame was the pride of Lexington, Kentucky.

Luke Kornet in the first quarter:

Knicks may be playing an inferior opponent for once but holy moly, Luke

The Knicks would have been the first team in NBA history to win a game by halftime if not for the fact that they threw literally 200 interceptions before intermission.

We see you, Brandon Sampson! pic.twitter.com/4ayWOiPBwM

The Bulls cut the lead down to five. ‘Twas a tale of two first-half halves: the Knick starters outscored the Bulls’ 47-30, but Chicago’s bench doubled up New York’s 20-10.

The highlight of the third quarter was rather ugly. But manure is a helluva fertilizer.

Mitchell Robinson took a mid-range shot and you can see why he rather dunk. Something to work on over the summer pic.twitter.com/EWs6Q6kpKQ

If Robinson’s improvement from the line is any indicator, the threat of a midrange J would be enervating and devastating to opposing bigs. For now, ‘tis but a dream. But what a dream. Speaking of unlikely people doing unlikely things, Henry Ellenson!

The Bulls would have made Dolores O’Riordan proud the way they lingered, but theirs was a relentless, Sisyphean fake comeback. If you’ll permit me to mix afterlife metaphors, a late Damyean Dotson three was Fenris heralding the end times.

Further evidence the apocalypse is a-comin’:

The light blue on the shorts…damn!

Magic Johnson, “I could have led the Knicks when Steve Mills called me”

Lmao remember that Knicks fan who sold his fandom only to join the Lakers who are a bigger mess than the Knicks ‍♀️ how’s that working out for you?!

Lance Thomas’s career record with the Knicks is 125-283 – he’s THE guy if you want to know more about the subtle nuances of a losing season. https://t.co/cEIGysRqR3

I criticize Lance Thomas’ game a lot here. But Simmons’ tweet feels so…beyond sad. I loved his articles back in the day. Every Friday I looked forward to them. Ralph Wiley and Simmons brought me hours of joy over a difficult span of years in life. He represented a reality of fandom that is, or certainly was, lost among all the caricatures and disregard the leagues, the teams, and the sports media all lazily capitalized on. And now he comes across as just another twisted bitter Boston sports guy, with a distorted sense of history and entitlement who thinks reality has been on pause since the 1960s or 1980s and doesn’t process that his team has won fewer titles in the past 35 years than the Houston Rockets and just one more than the Knicks.

He thought his team was on the cusp of a dynasty. Instead, they share a division with a Raptor team that looked ripe for a rebuild and is instead reinvigorated by the addition of Kawhi Leonard and the emergence of Pascal Siakam; a 76er team that added two complementary All-Stars to two young stars who could each one day be MVP; a Net team that’s finally out of purgatory with intriguing young talent, respected coaching and cap space in hand; and the Knicks — the bullied, hated Knicks — a realistic threat to take the same quantum leap Simmons’ C’s did when they added Kevin Garnett and Ray Allen.

Lance Thomas has never been even a replacement-level NBA player. Bill Simmons transcended the perceived limits of both sports fans and sportswriters. But one is respected. The other? A downward spiral of embitterment. The higher they fly, the farther they fall.

Quoth LegionofBlue14: “Bullet dodged.” Yup. I’m happy this team won’t go down as the worst in franchise history. I didn’t feel the 2015 Knicks “deserved” anything more than they got, but this team does. One game left tonight when they host a Piston team that’s win-and-in for the last playoff spot. See you then.