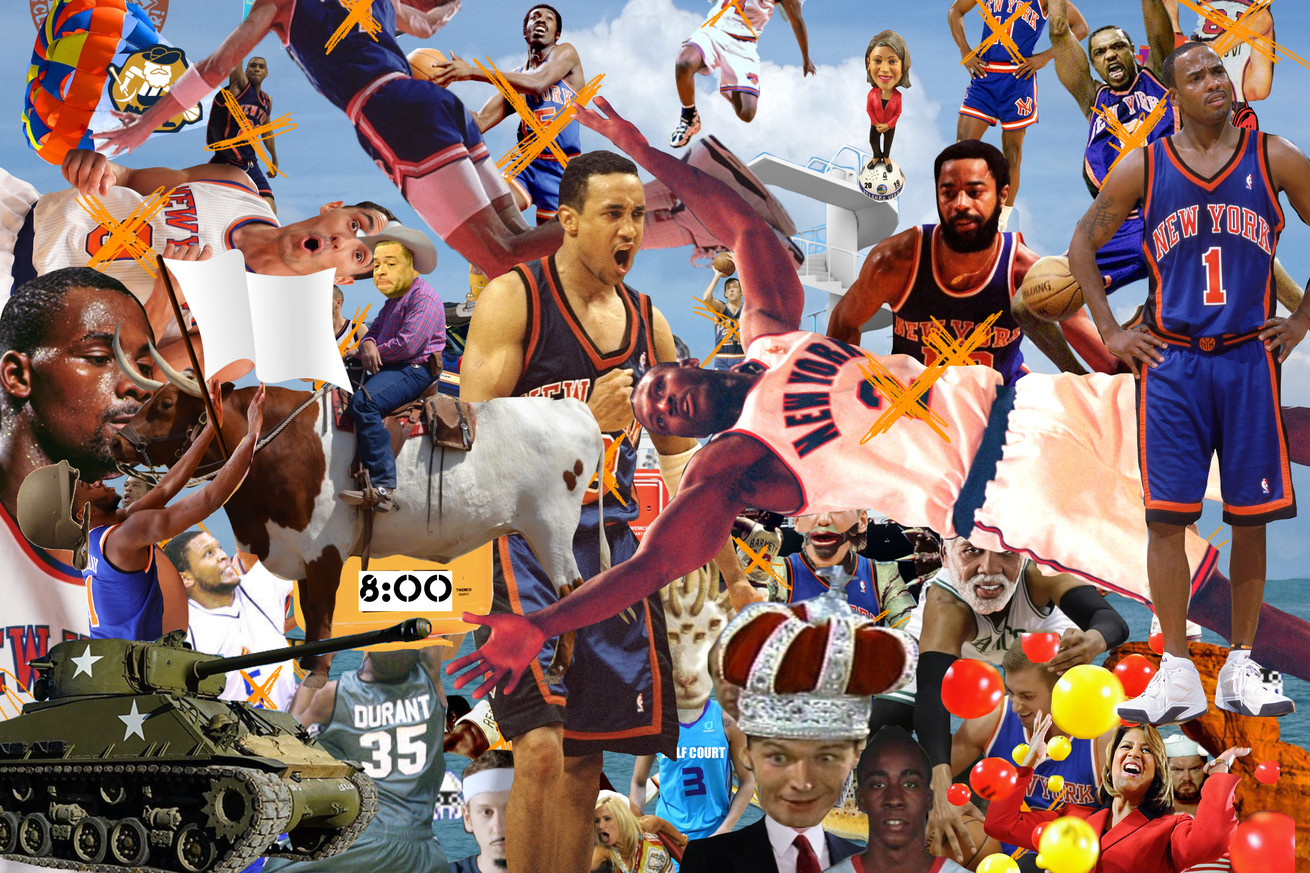 Boy, howdy. It’s the end, friend. I’ve tried to be a decent distraction hanging out in the preview pit. Painting a dystopian basketball hellscape. With any luck it brings you the moment of levity that sucks it’s teeth at the Knick fan’s reality. Hopefully it doesn’t remind you of that social medium that rarely asks how you’re doing and constantly pulls you to appreciate it’s inherent selfishness. You have to wonder where the love is. It’s been right here, all along, waiting for you at Posting and Toasting.

Well look. That was that and now we’re officially turning toward the draft. There will be so much to look forward to and you’re gonna be ok. We’re gonna have fun. There will be hope, ping pong balls, a top five pick, a bottom 50 pick, the vast open waters of free agency and maybe some other unexpected surprises along the way. It’s all real and it’s all spectacular.

That’s not why we’re here, however. Today is the final game of the dumb season. Game 82! Tonight the Knicks (17-64) square off against the Pistons (40-41) and there is actually something riding on this one for both teams!

#Pistons‘ win eliminates the #Heat. DET still needs to win tomorrow (or a CHA loss vs. ORL) to clinch a playoff spot.

Ah so the Knicks can play spoiler! Muy interesante. Pero, that’s not all. New York also has a chance to play themselves just out of the shadow of infamy. Certainly they’ll want to do it for themselves and Coach Fizdale, who has played several guys into career years.

The Knicks won. They’ve got 17 wins now. So they’ll only co-own the worst season in franchise history if they lose tomorrow night.

Well that tomorrow is today, let’s take on the present!

You wanna win Detroit? You gotta play small and gotta play fast! So yea, that’s my projection and it’s probably wrong. Like- Reggie Jackson, Mr. October in his own right, will most likely start and command his shots. They’ll probably try to play bigger than three shooting guards. I think that’s what they should do to win this one game. Therefore, they won’t.

#Pistons Blake Griffin on his knee injury: “I wasn’t able to help us tonight … we’re going to take it day by day. I’m going to sit with our training staff tomorrow and figure it out.”

Looking like no Blake Griffin tonight. He couldn’t go yesterday after hurting his knee 20 minutes in, and the Pistons still edged out Memphis. Certainly the record tells no lie, New York is the worst team in the NBA and the Pistons can beat them without their star. He’ll need the rest if they want to make any noise in the playoffs anyway.

As for the Knicks, ya know, some guys are out. Some guys will get their last look for the team tonight. Take a bow, fellas.

Who will guard Ish Smith? Is it Dennis Smith Jr.? Could it be Kadeem Allen!?! It could be, if it can be.

If Frank Ntilikina was healthy he would eviscerate the Detroit backcourt. Swiping and sniping. Oh yea, watch out for Andre Drummond. HE BIG.

Both teams are coming off a back to back but the Knicks have the advantage of being home. It’s their last dance, there is nothing to lose for them whatsoever. They’re gonna go out with a bang. I sense a 34-point outburst from someone, maybe that same big Dennis energy.

On the other hand, Detroit can control their own destiny if they get the win. The discomfort, heightened senses of being on the road, the static.