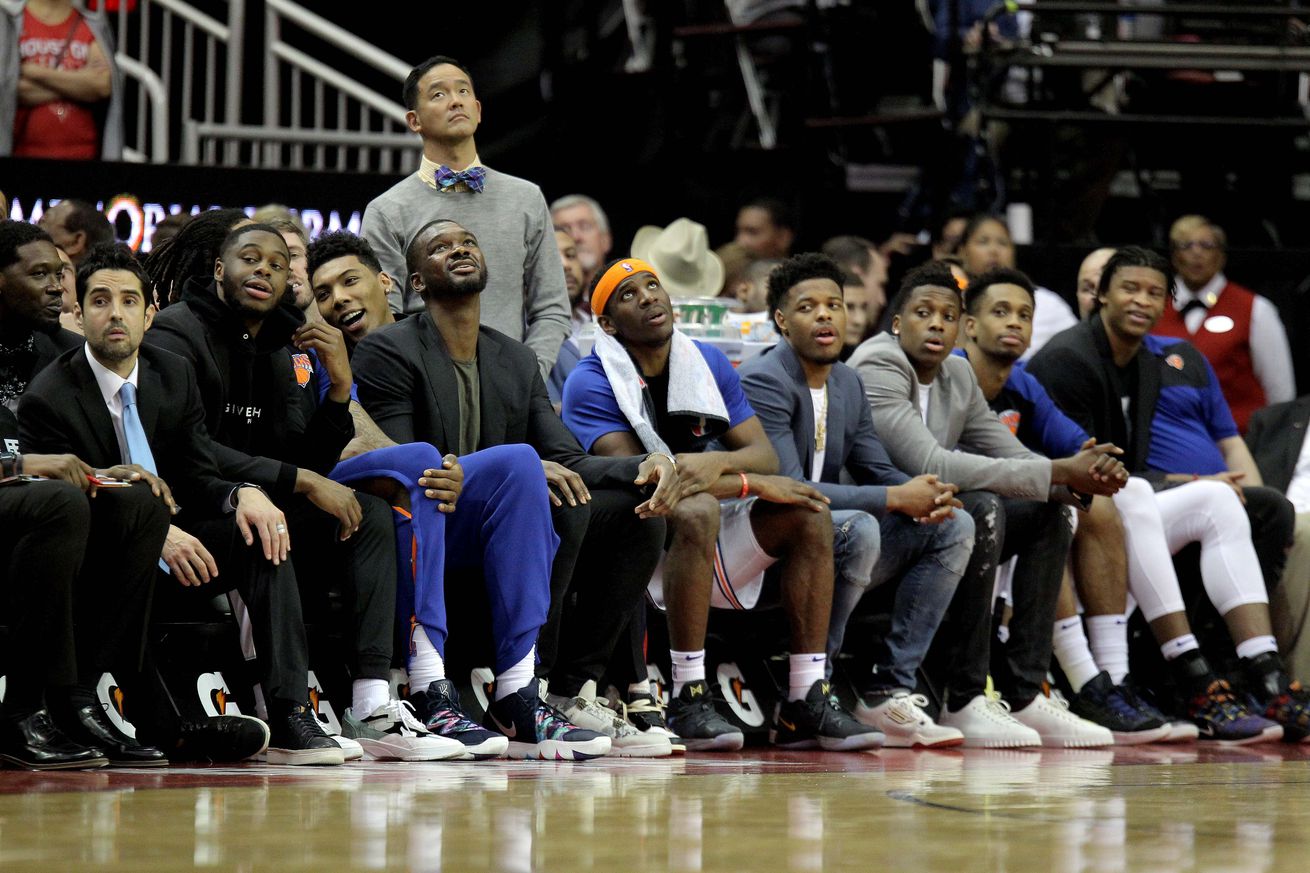 Take it to the polls!

Adios, 2018-19 season. Love, unsurprisingly, tore us apart again. No surprise if you’ve been following along for the past few generations, but that ache can always finds a new pit in your heart. “Ever onward” should be the mindset. Knicks players and management seem staid on the path to build as many small successes as they can stack up.

New York currently sits on just over $29 million of salary committed to active players on the 2019-20 roster. The impending top-five pick will command something between $9.7M and $6.3M depending where the pick lands. There is also the matter of Joakim Noah’s nearly $7M of dead pasture. Then there is the issue of players with options, non-guaranteed contracts and cap holds. So I decided we should play a little game. I’ll give you the player and their situation, you vote on what you wish the Knicks would do with them. (Also check out this handy table at Knicks Film School for guidance.)

Let’s start with the cap holds crew. These players are not on the books, but if the club wants to have the inside track on bringing them back they have to stomach the individual cap holds. It’s not the amount that the player will necessarily get when they sign a deal, but it’s a projected raise that auto-bookmarks space.

Before you answer, you should know that I’ll lay out the case for each player a little bit after the poll, and no matter what you decide there are ramifications to the salary cap. For anyone that is not retained, there is a minimum roster salary that must be allotted, which is just under $1m. Shall we??

Yikes! That’s a biggie. Almost doubles the amount of cap space currently committed to players with deals. DeAndre Jordan has been a good teammate and mentor in his short time in New York. He is also apparently good friends with Kevin Durant. Would he take significantly less to hoop with his troop? What is the magic number that makes him both feeling valued and a cap-friendly commodity?

Emmanuel Mudiay’s situation is inescapably horrifying. The Knicks only have themselves to blame for the size of his cap hold. They made sure he met qualifications in his contract (by starting a certain amount of games) to increase the hold nearly 40%. How positively Knicksy.

You have to consider that the guard spot is possibly the lowly Knicks’ deepest position. While Mudiay was at the helm the team stunk and you never really pointed them in any direction. You also have to assume that David Fizdale getting Big Mūd “right” means a lot to the organization. How can they abandon this reclamation project? Can they continue to build on that success? At what cost does he retain value? Is Mudiay even any good? At all? Whatsoever? (NO!)

Ahh, the curious case of Mario Hezonja. It’s a sloppy decision no matter how you dish it out. He loves New York and the fans seem happy to embrace his take no prisoners attitude. Can you renounce him and turn around to re-sign him for significantly less? The Knicks did give him what could be considered a sweetheart, make-good kind of a deal last off season. Would a smart ownership group keep his tornado-style approach to basketball away from the impressionable youngsters on the team? Or should his wild stallion-ness serve as a radical approach to informing them? Through it all he proved to be a good soldier no matter his circumstances. Does that make him a building block?

Luke Kornet has proven to be a valuable big man counterbalance to the spry exploits of a Mitchell Robinson or the bulldozer finesse of a Noah Vonleh. At this relatively low number, is he worth hanging onto? Or do you think you can find someone to replicate his skillset for a similar price tag or even less on the open market?

We haven’t had that big of a sample with Billy Garret and, unfortunately for him, it came at the tail end of the season when most teams had given in to their fate and just let everyone roam without anything but their love for the game. The kid has shown some shot making signs. It’s hard to feel like guard depth is the biggest issue.

The human snow plow proved to be an incredible late addition to the training camp roster and may have played himself into a career altering season. He was undeniably a gigantic, brutish man, but he used his power, blended with skill, to wield a variety of tantalizing attributes. Large Vonny was also a bonafide Giannis-stopper. Not many of those floating around.

Here we have deals that need immediate answers and can take a gouge out of that precious cap space.

Lance Thomas is a pro. Yea aren’t we all. Swing the axe.

The Knicks used their bi-annual exception to sign Allonzo Trier early this season. It seems highly improbable that they would abandon him so carelessly. At worst he is a quality trade asset. No matter what, he is quite the capable bucket bagger. He’s also shown some chops on defense and has a knack for finding roll men soaring above the cup.

Not much to go on with Henry Ellenson. He came in guns blazing and then just sorta ran out of ammo. He seemed to cover more ground and require defenses to look a little more lively in the dribble hand-offs that Vonleh made plenty of hay with. His inconsistency and lack of versatility made him appear worried. Personally, I’d sniff out a vet minimum somewhere else.

No question that Damyean Dotson turned out to be one of the steadiest contributors on both ends for a team that won a paltry 17 games. Do you need him around? He’ll make very little considering the type of production he can offer.

The choices here are pretty cut and dry. Do you want to put in the work on some lottery picks or don’t you? These are rookie deals, and that is one of the best cost-controlled assets you can find in the league. They also happen to stay that way for a long time, and then the team is afforded extra bonuses like restrictions and full Bird rights. Signing someone at the end of their rookie deal is not a Knick tradition, but it’s one of the easiest ways to go over the cap to keep young talent, assuming you have a bunch of star talent in tow that would otherwise be clogging the line. It’s also the type of contract that can be easily moved for current or future help (and in the present, about $9M more of cap room).

Rarely has a player been more polarizing to a fan base than Frank Ntilikina has. An elite defensive player that has had amateurish struggles trying to coordinate offense for himself and others. He has great passing instincts, but his unselfishness sometimes puts him in awkward positions.

In a lot of ways Dennis Smith Jr. has shown to be the inverse of Ntilikina. More of a scorer’s mentality, he can get in a groove that dumps home buckets, sometimes in ostentatious ways. He can also unlock some alley-oop passing for his bigs, and he finishes above the rim himself. Defensively he lacks tact; maybe that changes with experience. In Dallas he struggled to share the ball with other guards. In fairness, Luka Doncic needed the ball and Wes Matthews wasn’t about to pass it back. Then for New York, let’s just say the situation wasn’t very fluid.

There you have it. There is a path to putting just shy of $80M worth of cap space on the team. Enough for two max contracts (Kevin Durant and Kyrie Irving) and a little more money to play around with. From there you can fill out with minimum contracts or split an exception between a few players. The lottery is coming soon, then the draft and free agency will be here sooner than you know it. Let us know your virtuous plan for the future down below!