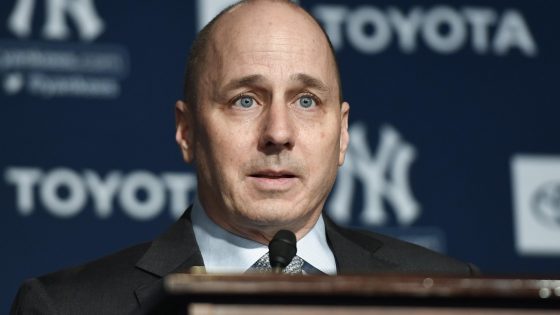 The Yankees should sell at this year’s trade deadline, just like they did in 2016.

Over the past month, we have made the case for the Yankees to make bold moves to fix their issues and get back into contention. Whether it was Arizona’s Ketel Marte or Miami’s Starling Marte (we ran out of Marte options), a good case was made for the Yankees to buy.

But let’s be real for a moment: this team, as constructed, isn’t winning the World Series. There have been too many significant injuries for certain, but even at full strength there are too many glaring flaws with this roster to win it all — especially the way Gerrit Cole has pitched since MLB started cracking down on sticky stuff.

So what do you do if you’re Brian Cashman? Maybe it’s time to dust off the files from 2016 and join the seller’s market before the deadline.

Do you remember the time?

On that date, the Yankees made a blockbuster trade that was supposed to change the futures of two franchises. New York sent closer Aroldis Chapman to the Cubs for four players: pitcher Adam Warren (whom they had traded to the Cubs for Starlin Castro earlier that year) and prospects Billy McKinney, Rashad Crawford and 19-year-old shortstop Gleyber Torres.

From Chicago’s perspective, the trade came with a heavy price but was totally worth it. The Cubs ended a 108-year World Series drought and Chapman was a big part of their championship.

For the Yankees, the thought was that Torres would be the long-term answer at short. He was the top-ranked prospect in the Cubs’ system and ranked No. 24 overall at the time.

Five days later, the Yankees made a contribution to the other team that finished the season in the World Series. Cashman traded Andrew Miller to Cleveland for s for J.P. Feyereisen, Clint Frazier, Ben Heller and Justus Sheffield.

Frazier is still developing and Sheffield has since been traded to Seattle. Miller was a star for Cleveland down the stretch and into the postseason.

Cashman turned two relievers on a team that wasn’t going to win the World Series into one major league reliever and seven prospects.

Most thought that was a good day for the Yankees. It felt even better when Chapman re-signed with the Yankees after the season ended.

Wanna be startin’ something

There is one enormous difference between the current Yankees and the team Cashman sold from five years ago.

The lack of significant players in a walk-year is a problem.

The best veteran on the roster to potentially move at the deadline would have been Corey Kluber, but injuries have minimized his potential value before the deadline.

All of the players who don’t have a defined salary for next year are still in arbitration. The four players of note with only one year of arbitration left on their contract are Aaron Judge, Gary Sanchez, Chad Green and Jameson Taillon.

Others, including Torres, Luke Voit and even Miguel Andujar, have multiple years of arbitration remaining.

And let’s be clear: even if the National League gets the DH in the new collective bargaining agreement this winter, finding a team to take Giancarlo Stanton’s contract will be nearly impossible. And if the Yankees did find a taker, they will undoubtedly have to retain salary to make a deal.

So is there any chance for Cashman to move money off the books so he can take part in a loaded free agent class this coming winter?

If the Yankees want to move current and/or future payroll off the books, the most significant player they could potentially leverage to make a big deal would be Judge.

It’s hard to see a scenario where Cashman moves arguably his best bat (and possibly only All-Star in the field).

Looking at the needs of teams in the playoff hunt, there may be other options on the roster for Cashman to move. But the return won’t be anywhere near what he brought back five years ago.

He came to New York as a buy-low candidate for a change of scenery to change his career trajectory. But the results have been mixed. Moving him wouldn’t bring back assets of significance, but could open a rotation spot for Clarke Schmidt and/or Deivi Garcia.

He has two years of arbitration left and has been a terrific player for the Yankees after they acquired him for essentially nothing. A team like the San Francisco Giants or Milwaukee Brewers could use a third baseman like Urshela. The big question if Urshela moved would be who would take over at third. Would we be back to Miguel Andujar there every day?

Is there a market for Sanchez?

There are teams who could use a catcher, and even with his improved performance at the plate recently the Yankees would likely be happy to move on. But fans would need to lower their expectations on the return for The Kraken. Again, the teams that could use a catcher at the deadline aren’t likely to be desperate enough to mortgage their future for Sanchez.

And, finally, what would interest the St. Louis Cardinals?

The Cardinals have needs all over the diamond and are chasing both the Brewers and Cubs. After making the investment in Nolan Arenado in the offseason, they’re in a position to go for it immediately and need help.

But what do the Yankees have that the Cardinals would want in a deal for a prospect of his caliber? Maybe Torres? That’s the million-dollar question.

What’s clear is that Cashman has a roster that has it’s limitations and doesn’t have assets that would immediately interest other teams.

It’s going to take a lot of creativity to make this Yankees’ roster into a winner. They need left-handed bats, more diversity in approach at the plate and (like everyone else) more arms.

And with the Red Sox getting Chris Sale back at some point, the Rays recently adding Wander Franco to their lineup and the Blue Jays’ young core emerging as superstars, the American League East doesn’t appear to be giving the Yankees a moment to right the ship.

It’s time for Cashman to go to work and fix the mess he’s created — if that’s possible.

FOR FULL STORY ON STANDARD WEBSITE: The Yankees should be sellers at the trade deadline | Elite Sports NY