TSFJ’s Jason Clinkscales wrote an analysis of the ticket policy that provides some outstanding insight into the fractured relationship between the Bronx Bombers and the borough they call home. It is highly recommended reading.

Even on the surface, the policy is silly and makes it difficult for people to sell their tickets online. Many people buy season tickets knowing they can’t commit to an 81 game slate and use reselling to recoup some of their cost.

The Yankees, according to COO Lonn Trost, are concerned that fans that pay full price to sit in a “premium location” will be perturbed by a fan that sits near them and got the ticket on the secondary market for a lesser price. As he said a few weeks back, “and quite frankly, the same, the fan, you know, may be someone who never sat in a premium location. So that’s a frustration to our existing fan base.”

To classify fans that can’t afford to pay full price for a “premium location” as somehow lesser fans is abhorrent. It is so because it isn’t about affecting the Yankees’ bottom line. The tickets were paid for at full price.

The reselling doesn’t impact the Yankees in any way other than the fans that are sitting in a premium location and how they look. It’s about the organization’s image. And John Oliver, knowing this fact, bought six tickets, right behind home plate, and gave them away on Twitter for 25 cents each.

The only caveat to purchasing the tickets is that the fans that buy them can not dress like they should be sitting in a premium location. This should lead to some outstanding outfits and hopefully other silliness that not only provides some entertainment, but also mocks the Yankees’ policy by providing an over-the-top visual representation of what the Yankees are trying to prevent.

It appears the winners of the first two of Oliver’s tickets moonlight as Teenage Mutant Ninja Turtles. 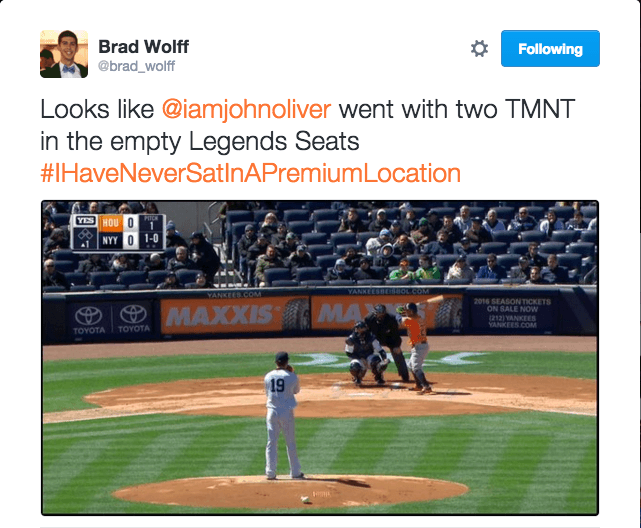