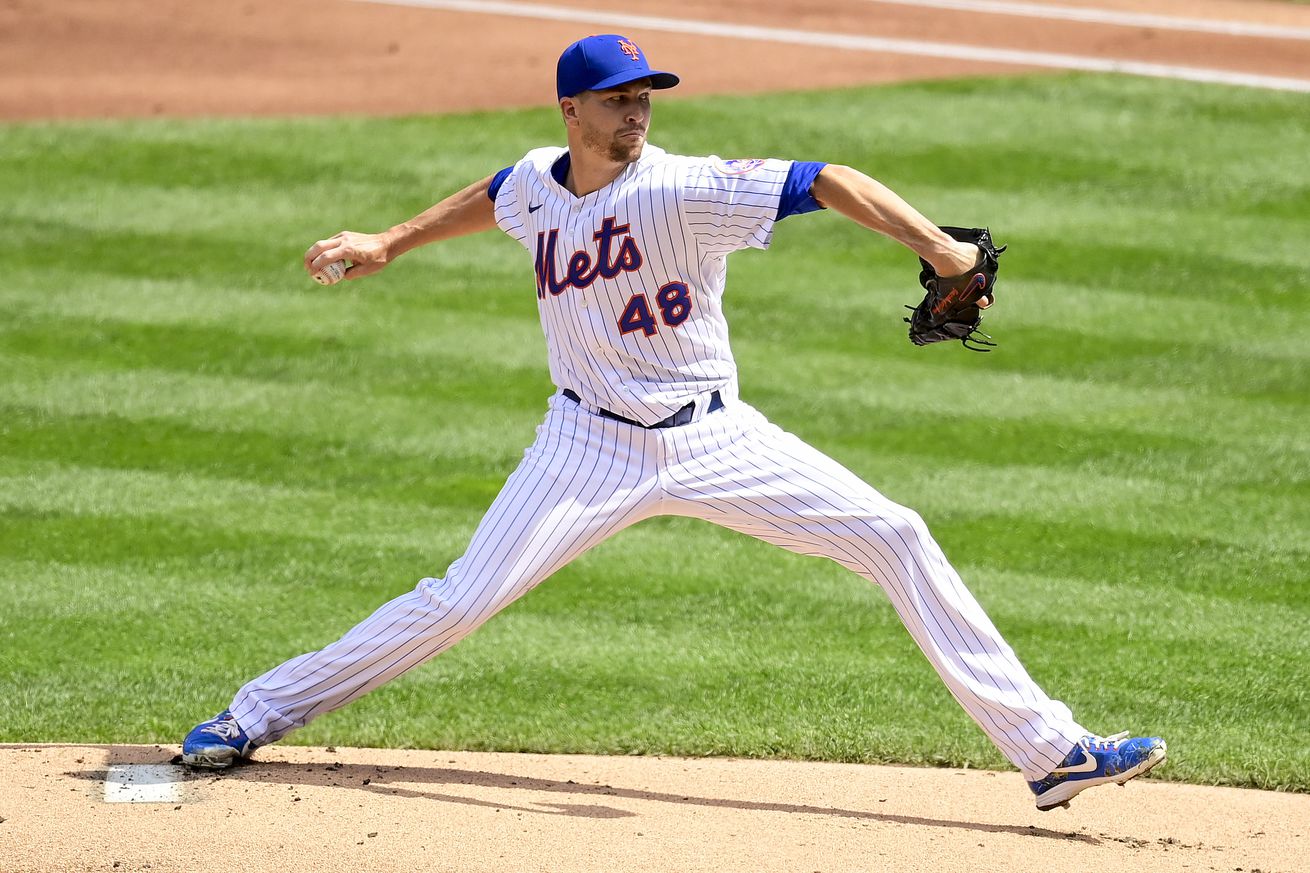 deGrom has been excellent, and right now he leads National League starting pitchers in ERA.

With Jacob deGrom having made yet another excellent start on Sunday and set to pitch again on Friday in the Mets’ series opener with the Blue Jays, it’s as good a time as any to check in on where deGrom stands in the National League Cy Young race. And it helps that Yu Darvish and Trevor Bauer, two of his main competitors for the award, pitched against each other last night.

Given the brevity of the season, stats are prone to changing wildly and quickly, but thus far, deGrom has been incredibly consistent. Among qualified starting pitchers in the National League, deGrom’s 1.69 ERA is the best. He’s trailed closely by Bauer with a 1.74 ERA and Darvish with a 1.77 ERA after Bauer had an excellent start last night and Darvish merely had exactly a quality start: six innings, three earned runs allowed. From there, it’s Max Fried with a 1.98 ERA, but the young lefty just hit the injured list, which would make it somewhat difficult for him to be in the mix for the award given the brief time left in the regular season.

There are six qualified starting pitchers in the 2.00-to-2.74 ERA range right now, too, and they should not be discounted: Dinelson Lamet, Zac Gallen, Zack Wheeler, Zach Davies, Adam Wainwright, and Aaron Nola. And Max Scherzer and Kyle Hendricks sit behind that group with a 3.40 and 3.41 ERA, respectively.

Despite having thrown slightly fewer innings than Darvish or Bauer, deGrom has 70 strikeouts, trailing Darvish by two and Bauer by one, while Scherzer is one strikeout behind deGrom. By strikeout percentage, deGrom’s 37.6 percent rate is the best in the National League, though Bauer sits close behind at 36.0 percent. Darvish isn’t too far back, either, with a 33.6 percent strikeout rate.

When it comes to walks, those three pitchers are tightly packed, too. With a 5.1 percent walk rate, Darvish ranks fifth, while deGrom’s 5.9 percent rate ranks seventh, and Bauer’s 6.6 percent rate ranks eighth. Strikeout and walk percentage probably don’t factor into the minds of many Cy Young voters, but they’re worth mentioning in any effort to determine which pitcher had the best season.

In terms of contextualized stats, FanGraphs has Bauer leading the league with a 37 ERA-, while Darvish and deGrom both had a 39 ERA- at the moment. Baseball-Reference has Darvish at a 311 ERA+, degrom at 255, and Bauer at 241. Those metrics both compare the performance of a pitcher to league average, though they measure and present it differently, but again, the race between all three pitchers is very close.

It’s also worth noting that there are currently seven qualified National League relievers with a sub-1.00 ERA, with Drew Pomeranz leading the way with a 0.00 ERA in 14.0 innings of work. But while relievers have won Cy Young Awards in years past, it would be surprising to see anyone with such a low innings total by season’s end win the award this year.

To the extent that legacy stats like wins and losses still matter, Darvish has an advantage over deGrom and Bauer with a 7-1 record. deGrom currently sits at 3-1, and Bauer is at 3-3, though watching deGrom over the course of his career has been a clear demonstration of just how little control a starting pitcher can have over wins and losses.

As long as everyone makes the remainder of their schedule starts this year, it seems likely that the Cy Young would go to any starting pitcher who’s able to finish the year with a significant lead in ERA. If things are really close, though, perhaps deGrom would have the advantage of incumbency, having won the award in each of the past two seasons.