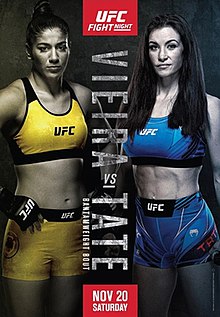 The really obvious answer here is her judo. You hear it lauded on the broadcasts before she fights. This happened in both the Randa Markos debut and her fight on the Contender Series. Although it didn’t really show itself all that much on Contender Series, she did manage to take down Markos five times in six tries. Markos has never been the best in the world at defending takedowns, but she is typically far better than that rate.

I think there would be a lot more hype behind Pinheiro if she could have fought through that entire Markos fight. After having some dominant positions, she got hit in the head with an illegal upkick and couldn’t continue. As a result, she picked up a win, but ultimately not much in the way of fanfare. That is with the exception of the sportsbooks, who have her listed as a massive favorite this weekend at -425 (Odds courtesy of FanDuel).

Sam Hughes is a game opponent. She has shown that in her first two bouts with Tecia Torres and Loma Lookboonme. However, the real glaring issue is how easy it was for Lookboonme to take her down. She did so four of eight times, which doesn’t seem great. However, Lookboonme is a Thai-style kickboxer who used to fight down a weight class at 105 lbs. If she can get Hughes to the mat that easily, it should be a breeze for Pinheiro.