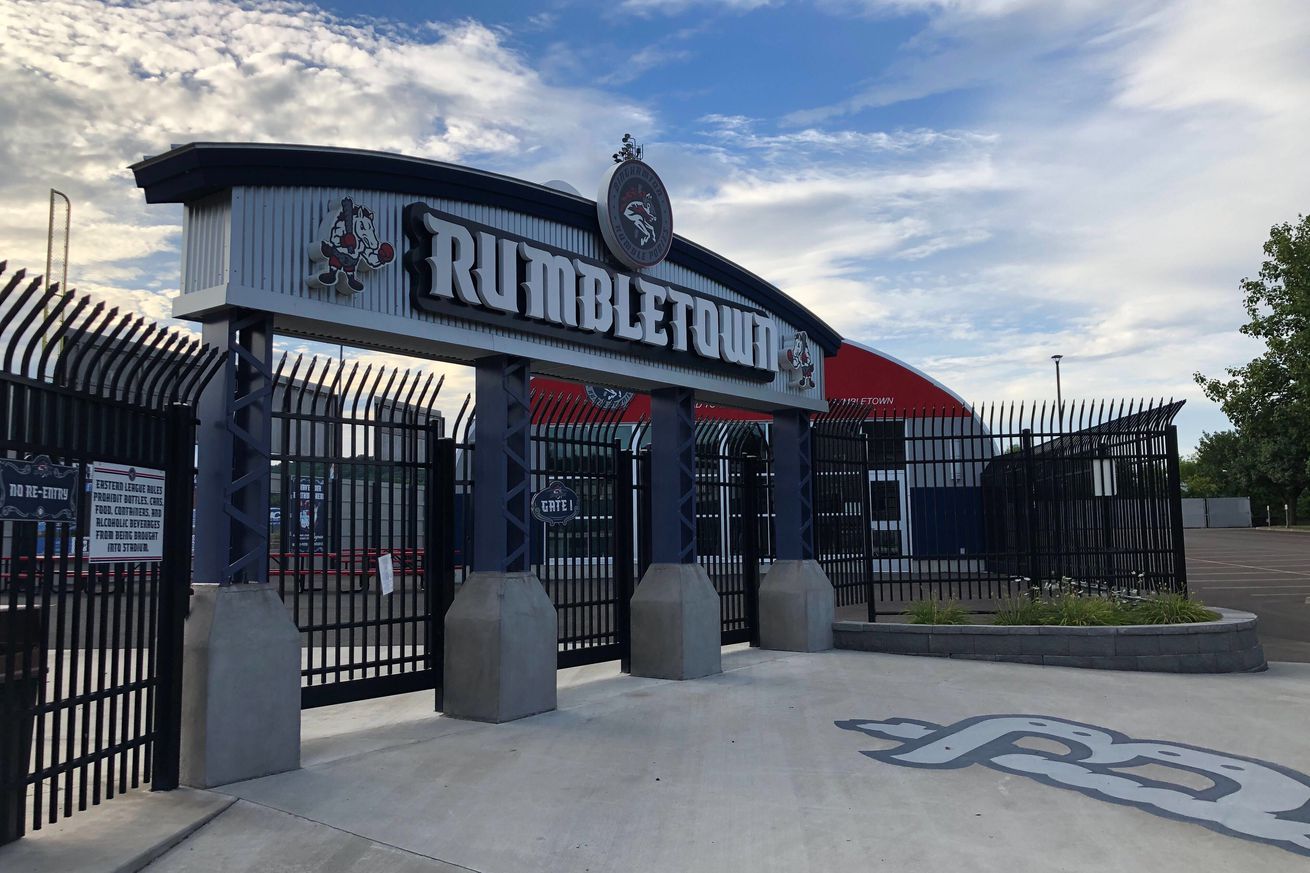 Next up on our trip is Binghamton, home of the Binghamton Rumble Ponies!

Binghamton is a city of roughly 47,376 at the confluence of the Susquehanna and Chenango Rivers. The largest city in upstate New York’s “Triple Cities” region, composed of it, Johnson City, and Endicott, Binghamton is the self-proclaimed “Carousel Capital of the World.” After incorporating as a city in 1867, Binghamton became major manufacturing center in the late 1800s and early-to-mid 1900s. As was the case with most other Rust Belt cities, Binghamton experience a major loss of jobs beginning in the 1960s. While the economy was buoyed somewhat by the many defense industry jobs in the city, the end of the Cold War and the collapse of the Soviet Union led to many of these jobs leaving Binghamton, triggering a long-term economic downturn that the city is still grappling with.

The history of baseball in Binghamton goes back over a century. The Binghamton Crickets were one of twenty-eight teams in the League Alliance, first semi-affiliated minor league baseball league proposed by Al Spalding back in 1877. Until the turn of the 20th century, the city hosted teams that played in various fledgling minor leagues. Intermittently nicknamed the Crickets and the Bingoes, the 1887 Binghamton Bingoes are a team that will go down in baseball infamy, eventually folding because of financial reasons after the team’s star player, John “Bud” Fowler was run off by his fellow teammates for simply being black.

Baseball in Binghamton saw a lot more stability starting in 1895, following the club joining the newly reformed New York State League. From 1895 until 1917, Binghamton fielded a club there. In 1918 and 1919, the Binghamton club shifted to the International League before folding. In 1923, the Binghamton Triplets joined the New York-Pennsylvania League, becoming a Yankees farm team in 1932. In 1938, a team from Hartford, Connecticut joined the league, and it renamed itself the Eastern League. The Triplets would remain affiliated with the Yankees until 1962, when they became a Kansas City Athletics minor league team. The affiliation with the A’s did not last long, and in 1964, Binghamton became affiliated with the Milwaukee Braves, who shifted them to the Pennsylvania-Ontario-New York League. That arrangement only lasted for one year, and in 1965, the Triplets became a Yankees farm team once again. The Yankees returned them to the Eastern League for the 1967 and 1968 seasons but left the city after the 1968 season when Boston businessman John Alevizos purchased the Triplets and moved them to Manchester, New Hampshire.

The Mets have been affiliated with Binghamton since 1992, after they purchased the Williamsport Bills in 1991 and moved the franchise upstate. Simply named the Binghamton Mets, the team made a buzz in their inaugural year, but attendance quickly cratered to the bottom of the Eastern League, as the economic situation in the city and its brisk spring weather generally kept fans away. In the early-to-mid-2010s, rumors swirled that the team would be sold to a new ownership group and leave Binghamton, but when new owners finally purchased the organization, they swore to keep the team in the city. They did change the team’s name, changing them from the bland Binghamton Mets to, following more recent Eastern League naming conventions, the Binghamton Rumble Ponies.

In late 2019, Baseball America reported that Major League Baseball was planning on introducing radical changes to minor league baseball and that over 40 teams would be contracted, all non-complex Rookie and Short-Season leagues. While the Eastern League would not be eliminated, it was reported that the Binghamton Mets would be put on the chopping block in order to save the Brooklyn Cyclones from being eliminated; that is, the Mets would effectively swap out affiliations, turning the Binghamton Rumble Ponies into their Short-A affiliate and the Brooklyn Cyclones into the Double-A affiliate. Many reasons factor into change, as Binghamton and Brooklyn are close to each other geographically, Brooklyn is a major moneymaker whereas Binghamton is not, and Brooklyn is owned by the Wilpon family while Binghamton is not, owned by former defense contractor John Hughes.

Called Binghamton Municipal Stadium until 2000, when the naming rights were sold to New York State Electric & Gas, the Binghamton Rumble Ponies play at NYSEG Stadium. Located in downtown Binghamton roughly a mile from the confluence of the Susquehanna and Chenago Rivers, the stadium seats roughly 6,000. The stadium is split-level, with a concourse running around the middle of the seating area. Over the 2018 offseason, using over $5 million dollars in funds appropriated from the City of Binghamton and the State of New York and $100,000 from team ownership, the stadium received a major overhaul, with improvements to the structural integrity of the stadium, seats, field, video system, sound system, clubhouse, locker rooms, netting, and concessions area being made. NYSEG Stadium was to host the 2020 Eastern League All-Star Game in 2020, the second time in franchise history it would have been played in Binghamton, but the event was cancelled along with the entire 2020 season because of COVID-19.

In addition to selling standard ballpark fare found across America, NYSEG Stadium offers a handful of regional concessions: spiedies and salt potatoes. Spiedies are a shish kebob-like sandwich made of marinated cubes of chicken, pork, lamb, veal, venison or beef that are grilled over a fire and served on Italian bread or a roll. Salt potatoes are exactly that, potatoes boiled in extremely salty water, resulting in a potato that is especially creamy, as the starch in the potatoes cooks more completely due to the higher boiling temperature of water. The stadium also features baseball-themed beer from the Cooperstown Brewing Company such as Nine Man Ale and Old Slugger.

When the team operated as the Binghamton Mets, their mascot were Ballwinkle and Buddy the Bee. The original Binghamton Mets mascot, Ballwinkle was a blue anthropomorphic moose, a play on words. Unlike normal moose, he had baseball bats instead of antlers and a baseball instead of a nose. In 1994, he was replaced by Buddy the Bee, an anthropomorphic bee who became featured on Binghamton logos from thereon in a soft rebranding from the “Binghamton Mets” to the “B-Mets”. In addition, Hickory and the Hatfield Hot Dog Horse offered between-innings, on-the-field entertainment. Clad in a horse costume Connor Gates, Director of Community Relations, threw hot dogs into the stands; “it’s all in the wrapper,” he said when asked about the secret to giving thrown hot dogs distance.

In 2017, when the team rebranded as the Rumble Ponies, Rowdy the Rumble Pony became the team’s mascot. An anthropomorphic, bipedal, mohawk-wearing horse, Rowdy is a confident tough-guy, who once even got to attend a WWE event as the cornerman for Heath Slater and Rhyno. Rowdy is a great dancer, an excellent athlete, and is generally a young buck.