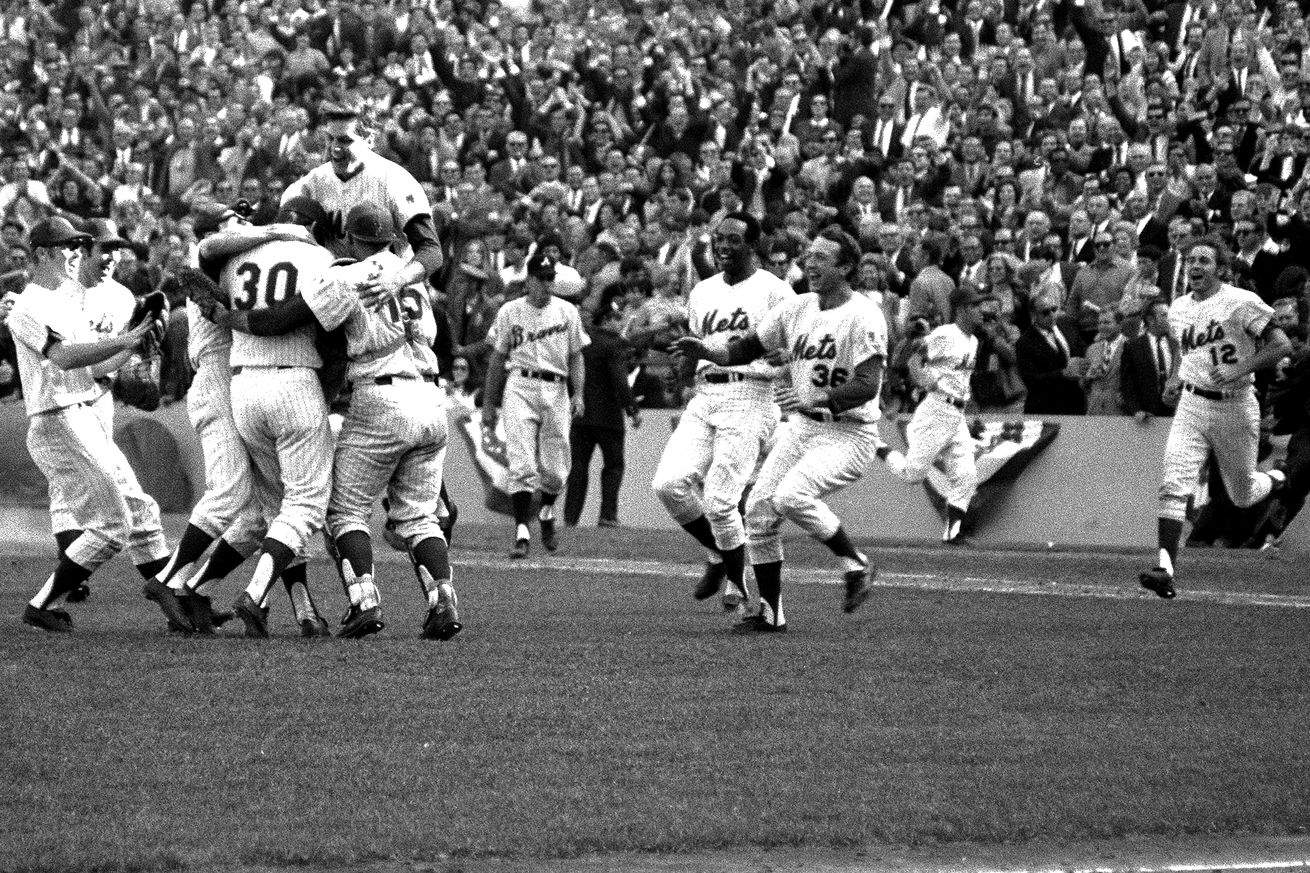 In a high-scoring series, the Mets swept the Braves to advance to the World Series.

With the National League Championship Series set to begin tonight, it’s as good a time as any to look back at the Mets’ history in that series, which started with the very first NLCS in 1969. Before then, there weren’t divisions, with the National and American League pennants having gone to the team from each league with the best regular season record up until that year.

Having finished the season with a 100-62 record that was the best in the National League, the Mets embarked the a best-of-five series—which was the format of the NLCS until the mid-80s—by facing the Atlanta Braves, who finished atop the National League West with a 93-69 record.

The Mets served as the road team in the first two games of the series, and they started Tom Seaver, who was coming off a superb regular season that would net him his first Cy Young Award, in Game 1. The Mets scored first with a pair of runs in the top of the second, but Seaver gave up one run in the bottom of that inning and two more in the bottom of the third.

A two-run triple by Bud Harrelson in the top of the fourth gave the Mets the lead again, but Seaver allowed a game-tying solo home run to Tony Gonzalez in the bottom of the fifth. And in the bottom of the seventh, Hank Aaron hit a solo shot off Seaver to give the Braves a late 5-4 lead.

Phiel Niekro had started the game for the Braves and remained on the mound for the top of the eighth, and the Mets didn’t waste any time in responding to Aaron’s home run. Wayne Garrett led off the inning with a double, and Cleon Jones followed that up with a single that scored him to tie the game. Art Shamsky singled to put runners on first and second, and Jones then stole third before Ken Boswell hit into a fielder’s choice that retired Al Weis, who had run for Shamsky, at second base.

With runners on the corners and one out, Ed Kranepool hit a ground ball to first, but Braves first baseman Orlando Cepeda made a throwing error in attempting to throw out Jones at the plate, allowing him to score and giving the Mets a 6-5 lead. Niekro got Jerry Grote to ground out to third for the second out of the inning, but with both baserunners having advanced and Seaver on deck, the Braves opted to intentionally walk Harrelson to load the bases.

The Mets sent J.C. Martin, who spent just two seasons with the team and had .209/.257/.316 in 192 plate appearances that year, to the plate as a pinch hitter for Seaver. But he came through with a single that scored two runs on its own, with a third run scoring on an error by the center fielder. Martin wound up getting thrown out at third on the play to end the inning, but the Mets had a commanding 9-5 lead.

Ron Taylor, who had joined the Mets in 1967 and had been a good reliever for them from that point on, took over on the mound and threw two scoreless innings with a couple of strikeouts and a couple of hits allowed to finish off the Mets’ victory in the first game in NLCS history.

The Mets’ lineup got right to it in Game 2, loading the bases in the first inning with nobody out. Art Shamsky and Ken Boswell struck out, but Ed Kranepool singled in one run before Jerry Grote struck out looking with the bases still loaded to end the inning. And while that overall result might have been disappointing, the Mets made up for it in the top of the second.

Braves starter Ron Reed walked Mets starter Jerry Kossman with one out in that inning, and Tommie Agee followed that up with a two-run home run. One out later, Cleon Jones doubled, and Shamsky singled to bring him home. The Mets were up 4-0, and Reed’s day was over. In the third, Bud Harrelson doubled in a run, and Wayne Garrett singled in another later in the inning to give the Mets a 6-0 lead. And in the fourth, Boswell hit a two-run home run to make it 8-0 in favor of the Mets.

Koosman had started the game and hadn’t allowed any runs through the first three innings, but he gave up one in the bottom of the fourth on a single by Orlando Cepeda. But in the top of the fifth, Jones answered that with a single that plated the Mets’ ninth run of the day.

In the bottom of the fifth, though, things went south suddenly for Koosman. With two outs in the inning, he gave up a single, issued a walk, and served up a three-run home run. Another walk and a double set the stage for a two-run single, which cut the Mets’ lead to 9-6 and ended Koosman’s day, with Gil Hodges again turning to Ron Taylor out of the bullpen.

From there, it was smooth sailing. Taylor threw one-and-one-third scoreless innings before Hodges gave the ball to Tug McGraw, who went three scoreless innings himself. And the Mets got a little insurance, too, when Jones hit a two-run home run in the top of the seventh to put them up 11-6—which wound up being the final score of the game.

With the Mets up 2-0 in the series and needing just one win to advance to the World Series, the NLCS shifted to Shea Stadium for Game 3. Gary Gentry got the start for the Mets, and Hank Aaron hit a two-run home run off of him in the top of the first.

With the Mets still trailing 2-0 in the top of the third, Gentry’s start came to an end when he gave up a single and a double to start that inning. Nolan Ryan was summoned from the bullpen and got out of that inning without allowing the Braves to score any more runs. The Mets proceeded to get on the board with a solo home run by Tommie Agee in the bottom of the third, and they took a 3-2 lead when Ken Boswell hit a two-run home run in the bottom of the fourth.

Ryan retired Tony Gonzalez and Hank Aaron to begin the top of the fifth, but he issued a two-out walk and gave up a two-run home run to Orlando Cepeda, which gave the Braves a 4-3 lead. But the Mets answered quickly yet again, with Wayne Garrett hitting a go-ahead two-run home run in the bottom of the inning and Ken Boswell singling home another run later in the inning to put the Mets up 6-4. And Agee tacked on one more run with an RBI single in the bottom of the sixth.

Ryan went on to pitch the rest of the game without allowing the Braves to score again. In total, he threw seven innings in relief and gave up just the two runs on the Cepeda home run while striking out seven, walking two, and giving up a total of just three hits.

With that, the Mets completed a sweep of the Braves to advance to the World Series. For a team that had struggled so mightily in its first seven years of existence, it might have seemed unbelievable. And the best was yet to come.