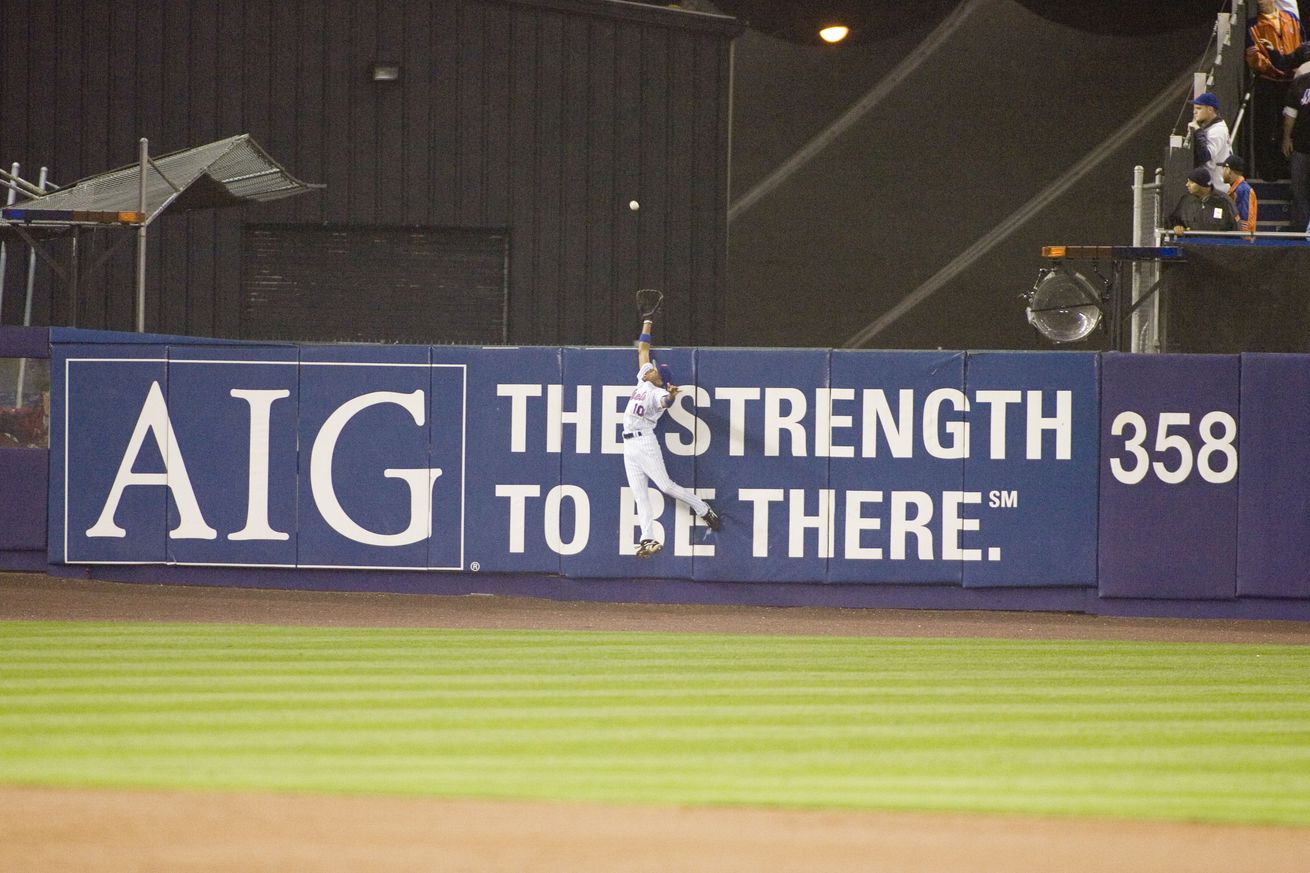 For an entire generation of Mets fans, the 2006 team represented their first palpable taste of what it must have been like to be a fan in 1986. Despite two relatively recent playoff appearances, including a trip to the World Series six years earlier, the Mets of the late 90s had always felt insurgent; upstarts who were there through pure perseverance and grit. But the ‘06 team felt like a team of destiny.

The “New Mets,” which began in the winter of 2004 when Carlos Beltran signed a seven year deal with the club and branded them with their moniker during his introductory press conference, were a team that was carefully assembled from the free agent ranks, built around a duo of home-grown talents. Unlike earlier incarnations of the team, built around homegrown and cost controlled starting pitching, the 2006 Mets felt like a fantasy baseball team, plucking stars from the various corners of the MLB. Poached lefties from divisional rivals, a recent World Series champion during a Hall of Fame run, a behemoth of a first baseman, and perhaps the best center fielder in baseball were all brought in between the end of 2004 and the start of 2006 to help the Mets regain their prominence in the National League East.

And they delivered. The 2006 team pushed all the right buttons, both on and off the field, and never allowed fate to do anything but bow to their whims. When their elite setup man Duaner Sanchez was injured in a taxi accident in Miami, they traded their right-fielder having a career year, Xavier Nady, for a veteran replacement, Roberto Hernandez, and took a flyer on the wild, mercurial Oliver Perez, both of whom would pay dividends for the club. The August acquisition of Shawn Green from the Dodgers gave the team another lefty bat that could mash, and made the loss of Nady more palatable.

The Mets clinched the division championship, their first since 1988, on September 18th. Just three days earlier, Pedro Martinez, who was in the midst of an up and down season due to a hip injury, made his last appearance for the ‘06 club and went on the disabled list with a torn rotator cuff and a muscle tear in his left calf. The day before the Division Series against the Dodgers, Orlando “El Duque” Hernandez, tore a calf muscle during practice, requiring him to be left off the postseason roster.

After a three-game sweep of the Dodgers, the Mets were set to take on the Cardinals in the NLCS, against whom they had gone 4-2 in the regular season.

Tom Glavine started game one for the Mets, and looked every bit the Hall of Fame pitcher that he wound up being, tossing seven scoreless innings, scattering four hits and two walks alongside two strikeouts in a 2-0 victory at Shea Stadium. In a rare bit of weird flexing from an otherwise classy player, Albert Pujols went on the record as saying that Glavine did not have good stuff, that the Cardinals simply beat themselves in the game.

Tony LaRusa, the manager of the Cardinals, expressed frustration at the way the quote was presented, saying that it was made in the aftermath of a close game and how that somehow excuses Pujols from his comments?

The Mets scored their lone runs on a two-run home run from Carlos Beltran, who took Jeff Weaver deep in the bottom of the sixth inning. Guillermo Mota and Billy Wagner completed the shutout for the Mets.

This is where the Mets’ lack of starting pitching depth, due to the injuries to Pedro and El Duque, began to sting the Mets in this series. John Maine, in his first season in New York, started for the Mets, and looked less than stellar, giving up four runs, three earned, in four innings of work. While Maine may still have received a start if the two fallen starters were healthy, there would likely have been a piggyback opportunity for another starter to come in when Maine started to falter.

The Mets scored six runs in the first six innings, including two home runs by Carlos Delgado, a run-scoring single from Jose Reyes, and an RBI double from Paul Lo Duca. But in the seventh inning, Guillermo Moto gave up a two run triple to Scott Spezio, tying the game at 6 apiece. Two innings later, Billy Wagner gave up four hits and three runs, including a home run to So Taguchi.

The series was tied heading to St. Louis.

I miss a lot of things about the 2006 Mets. Watching Steve Trachsel pitch is not one of them.

Trachsel, for those of you weren’t watching many Mets games in the early to mid aughts, was one of the slowest pitchers on the mound. There seemed to be a lifetime between pitches, and those pitches were not exactly electrifying. He was the definition of an innings eater and a back-end of the rotation starter. He was dependable, even if you weren’t depending on him for much.

His game three start was an absolute disaster, with five earned runs crossing the plate before recording his fourth out of the game. In the first inning, Trachsel allowed Spezio’s second two-run triple in two games in the first, and loaded the bases before escaping with just two runs scoring. The second inning began with the indignity of giving up a home run to Jeff Suppan, the opposing pitcher, two walks, and then a line drive that nailed him and led to him leaving the game.

Relief pitcher/one of the unheralded heroes of the 2006 season Darren Oliver took over, and after a wild pitch and a single scoring 2 more runs, settled in through the seventh inning. Unfortunately, the Mets were stymied by Suppan for eight shutout innings, and lost the game 5-0.

Just a few years after taking a risk on ‘fixing’ Victor Zambrano, the Mets attempted the same thing with Oliver Perez and, initially, it seemed to sort of work. Perez was by no means a control pitcher after a few months with Mets pitching coach Rick Peterson, but he seemed less prone to being an absolute mess on any given start.

Now, granted, he gave up five runs on five and two-thirds innings, but until the sixth, he was controlling the damage. He scattered nine hits and, most shockingly, just one walk, and kept his team in the game. Luckily for him, the Mets’ offense woke up after a 14-inning scoreless streak when both Carlos Beltran and David Wright hit solo home runs in the third inning. Carlos Delgado added one of his own in the fifth. The Cardinals bullpen would implode and give up three more runs in the sixth, six in the seventh, and Beltran would put a cherry on top with his second home run of the game in the seventh off former Met Braden Looper.

Tom Glavine began the game quite strong, looking to duplicate his “start a game that was delayed a day by rain” magic in Game 5 as he did in Game 1. The Mets got off to an early lead against Jeff Weaver in the way of a Jose Valetin double in the top of the fourth that scored Delgado and Green, putting the Mets up 2-0. In the bottom of that inning, Glavine coughed up the lead, with a Pujols home run and a Ronnie Belliard single tying the game.

Glavine couldn’t record an out in the fifth, being pulled after a Preston Wilson RBI double put the Cardinals up by one run. They’d add an insurance run in the sixth on a Chris Duncan home run against “Perpetual” Pedro Felician to cap off the game.

In a do or die match up, the Mets turned to John Maine to stay alive when the series returned to Citi Field. It was the inverse of Game 5’s score, as the Mets were able to take down Chris Carpenter for their third win of the series. Jose Reyes led off the game with a home run, and the Mets would not relinquish the lead after that.

Maine pitched five and a third innings of shutout ball, and a combination of Chad Bradford, Guillermo Mota, and Aaron Heilman continued the scoreless outing. However, Billy Wagner continued to struggle, giving up two runs in the ninth on a double to newly dubbed Met killer Taguchi.

Oliver Perez got the start in Game 7, a sentence that seems conjured out of pure terror, but Perez pitched, perhaps, the game of his life. I distinctly remember a sign being shown on the broadcast that someone made proclaiming “Oliver’s Army,” and Tim McCarver being flummoxed by it, saying how he was on the scrap heap just two months earlier and now he has an ‘army’ of fans. He also didn’t realize it was an Elvis Costello reference, but I don’t blame McCarver for not being up on his twenty-five year old New Wave references. When Joe Buck gets the hipper references on the broadcast, you know you’ve got the coolest booth in baseball.

Perez scattered four hits and two walks over six innings, giving up just one run on a sacrifice play in the second inning. It was a remarkable performance from an always interesting, but often frustrating, starting pitcher.

The Mets got on the board early with a Wright RBI-single, plating Beltran, but this would the Mets only run of the game.

In the sixth inning, one of the Mets’ all-time most memorable plays happened. After walking Jim Edmonds with one out, Scott Rolen hit what looked to be a sure thing home run to left field. Endy Chavez measured the ball at the warning track, leapt and caught the ball in his glove in a near snow cone and somehow brought it back into play. Then, a quick and accurate throw to first base doubled off Edmonds to get Perez out of the inning.

That felt like it could be a turning point for the game, but the Mets’ bats were stymied by Jeff Suppan and Randy Flores through eight innings. The Cardinals bats, however, were awoken by Aaron Heilman in the ninth inning. After an impressive eighth, Heilman returned to the mound, and gave up a Scott Rolen single and then a Yadier Molina home run to put the Cardinals up by two.

Cardinals closer Adam Wainwright really struggled in the ninth, issue back to back singles to Jose Valentin and Endy Chavez and walking Paul Lo Duca to load the bases with two outs. But then, his infamous curveball froze Beltran, and the most dominant Met team of my memory was snuffed out of the World Series hunt in front of a capacity crowd at Shea.

The only balm to our collective dread was that this team appeared built for the long haul. Wright and Reyes were young and cost controlled, there were five more years of Beltran, and Delgado, Glavine, and Pedro were all there for at least another year. If we had known then that this would be the last Mets team to make the playoffs for nine years, the sting would’ve been even worse.