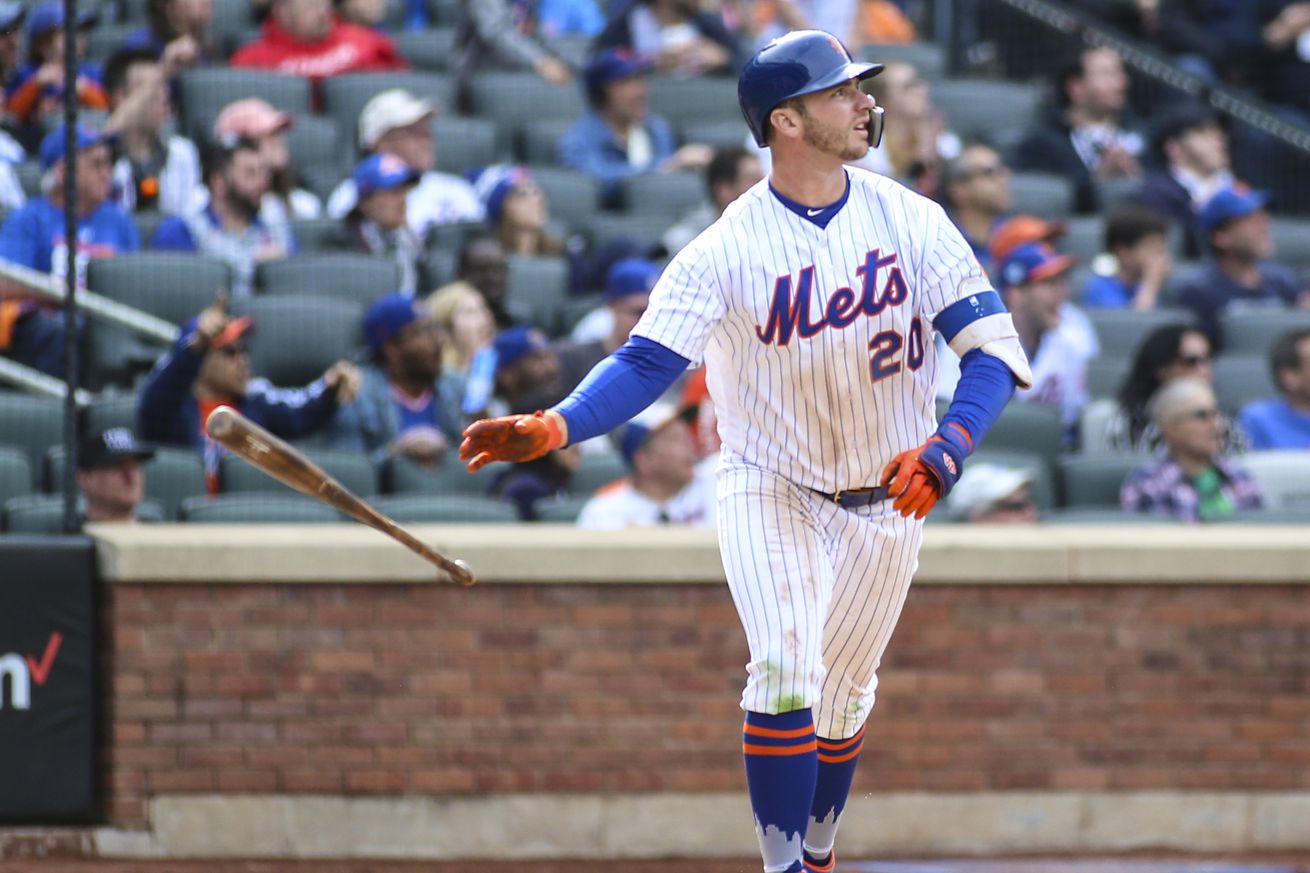 The slugger has thrived so far in the big leagues.

It is still very early, but Pete Alonso has exceeded expectations through the first two and a half weeks of the season. The 24-year-old slugger has put up some gaudy numbers for the Mets, hitting .345/.419/.800 with an incredible 213 wRC+. Alonso’s slugging percentage is good for fourth in the majors behind Anthony Rendon, Mike Trout, and Cody Bellinger, and his wRC+ ranks fourth as well.

Alonso has already hit six home runs and driven in 17 runs, and he played a vital role in the Mets’ comeback against the Nationals’ bullpen on April 6. He has amassed 1.0 fWAR already and established himself as a legitimate threat in a Mets’ offense that is averaging six runs per game.

It’s not just that he is putting up stellar numbers, but also how he is going about it. As Michael Baumann points out in his excellent piece for The Ringer, Alonso is hitting everything. His thirteen extra-base hits have come against five different pitches, which is especially encouraging since an anonymous scout thought Alonso would struggle against the slider. While he still hits fastballs extremely well, he’s hit .333 with a .667 SLG against breaking pitches.

Not only is the rookie hitting everything, he is hitting everything extremely hard. Twenty-two of his hits have registered over 95 mph which is good for a rate of 61.1%. That percentage puts him in the top ten in the majors and he is just behind his teammate J.D. Davis. His barrels per plate appearance percentage of 17.7% comes in at fourth just behind someone named Mike Trout. In short, pick any offensive category and you will most likely find Alonso’s name towards the top.

As Anthony DiComo pointed out last week, Alonso is also using the entire field, which makes it difficult for defenses to shift against him.

And here is a spray chart of Pete Alonso’s first 15 big league hits. All fields with power. You won’t find a more eclectic mix. pic.twitter.com/C6UdLFaKKS

While all of this is encouraging, it is important to keep in mind that it is still very early in the season. The league will make adjustments and it will be up to him to figure it out when that time comes. However, the first baseman was already quoted saying that he made the necessary adjustments against Stephen Strasburg who he struggled against in spring.

It is also important to remember Alonso would have just made his debut over the weekend if the Mets sent him to Syracuse to start the year. The team would still not know if he could hit Stephen Strasburg, Max Scherzer, or Patrick Corbin. He still would not have faced them at the major league level and gotten a sense of their pitches and how they were planning to pitch to him. This is key since the Nationals are expected to compete for the division crown. If he can learn to hit their top pitchers, as well as their shaky bullpen, the Mets will be in good shape in the NL East race.

From a fan’s perspective Alonso is a complete package. His youthful enthusiasm has injected fun and personality into the team and makes them a joy to watch. His at-bats are quickly becoming must watch theater and it has been a bit since the Mets have had a player of that caliber. An argument could be made for Yoenis Cespedes or Michael Conforto, but Alonso’s jaw dropping power is worth tuning in for.

While there is still a lot of season left to play, the young first baseman has already had a big impact on what is expected to be a tight National League East race. As GM Brodie Van Wagenen has stated the goal is to win now and the choice to bring Alonso north to start the season is paying huge dividends for the ballclub.