The undisputed favourite of the Pacific Division, the Knights do provide a certain foreboding irony. Despite their incredible string of success the air of invincibility has lifted and doubts begin to fester. For the most part this stems from how ineffective they’ve been rendered by the Stars and Canadiens in consecutive seasons. Of course, high volume roster turnover, questionable signings and trades, and general questions of roster construction add to it. In particular, the centre ice position has been seriously thrown into doubt, but at least Vegas has some options. At some point this season or next Peyton Krebs will be ready to assume a top 9 centre job, but until then Nolan Patrick will have a chance to breathe new life into his career. GM McCrimmon has been adjacent to Patrick and his camp enough that you’d assume he knows what he’s getting well, but Vegas has been able to get a lot from their centre ice position across many skill levels. This is a great opportunity for both team and player and could be the start of a good thing. With most of the strong group from last year returning, there’s no reason to think the Knights won’t be just as good up front, although adding Dadonov in Reaves’ place points to an adjustment in approach. I do think Keegan Kolesar is a good bottom 6 option. 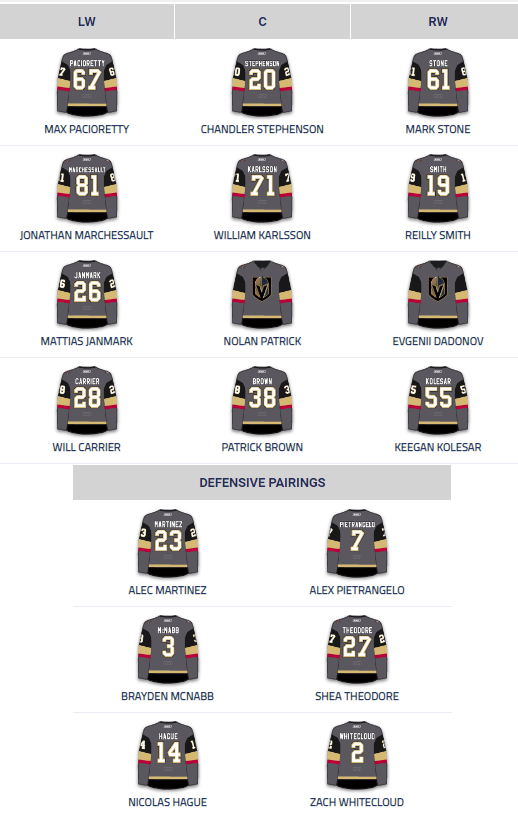 There’s a reason Pietrangelo was named as one of the first 3 selections for team Canada’s Olympic Roster. Despite modest point totals he is truly among the top defenders in the world right now. Theodore slots in so nicely on the 2nd pair and is the Knights’ primary offensive defenceman. Martinez and McNabb partner well with Pietrangelo and Theodore respectively, while Hague and Whitecloud were very effective as a 3rd pair last season, and could each make their way higher in the lineup in the future. Dylan Coughlan is an offensive depth option who has done well during his limited NHL experience.

Fleury was dumped for nothing after winning the Vezina, which says a lot about the nature of goaltending, awards voting, and the reality of the current cap situation. Lehner has done more than most to finally earn a true starters role, and behind a strong team and an authentic off ice presence will be one of the front and centre athletes at the position. The only concern is how many games Lehner will be able to start, but I have faith that Laurent Brossoit will come into his own and play more games than he did behind Hellebyuck the past few seasons.

Vegas has a few interesting pieces on the horizon, especially given the sustained success they’ve enjoyed. I previously mentioned Krebs, whose strong two-way play and skill could see him become the Knights top centre. There are some interesting prospects like forwards Dorofeyev and Brisson, a year or two away, as is recent draftee Daniil Chayka who I thought was a great selection. More of a general note, it’s clear Vegas prioritized drafting big defencemen, as a glut such players slowly make their way up the depth chart. Kaden Korzack might be the most highly touted of the group, which should ensure the blueline has incoming options for years to come.