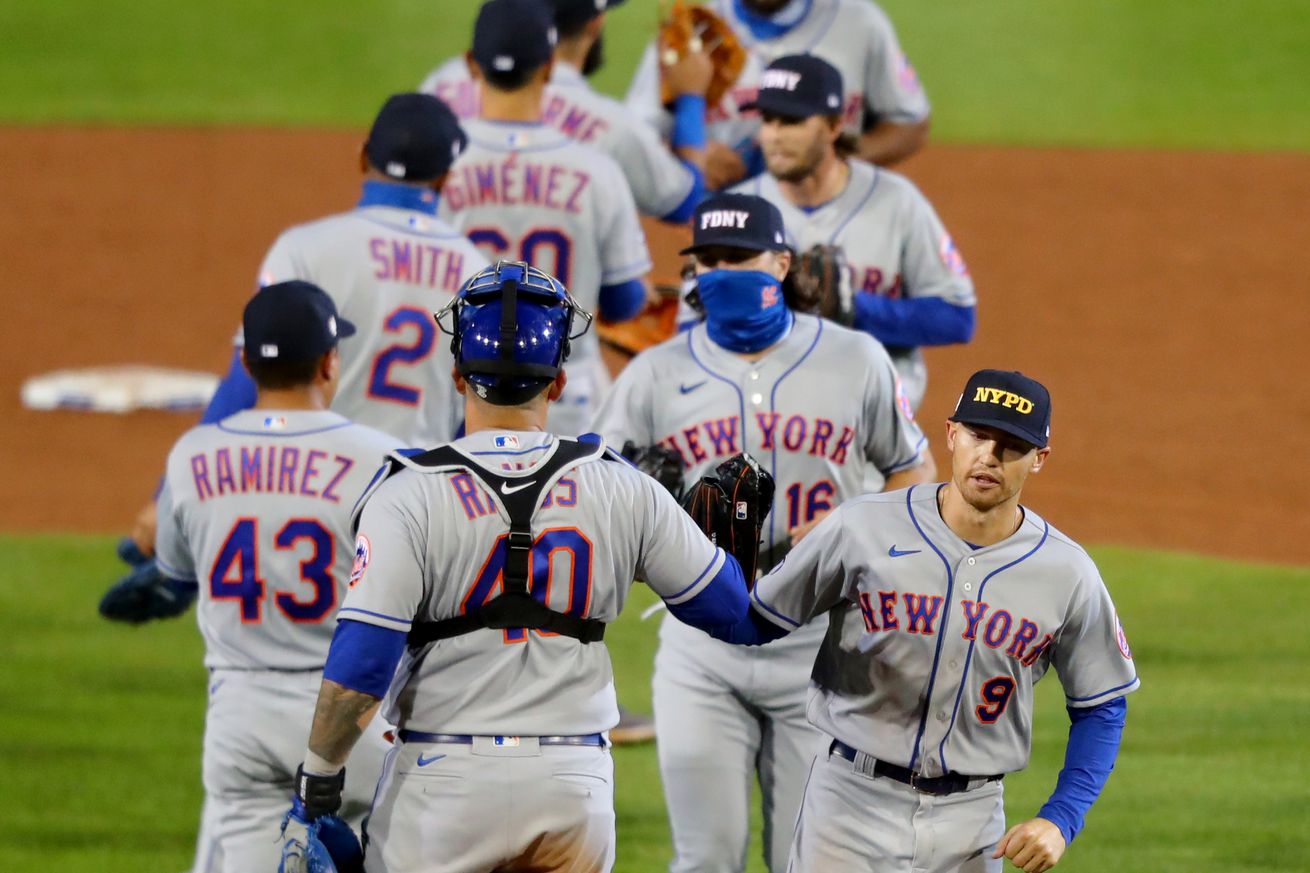 The Mets began a three-game series against the Blue Jays in Buffalo last night with Jacob deGrom on the mound. For the second straight start, the offense performed the unusual task of giving the ace plenty of run support, as the team scored a whopping 18 runs (buoyed by a 10-run fourth inning) en route to an 18-1 victory.

Thanks in large part to Pete Alonso’s continued activism over the subject, the Mets wore first responder caps in honor of 9/11 during yesterday’s game.

With the shortened season entering its final stretch, what has to happen in these last few weeks in order for the Mets to make the postseason?

deGrom may or may not win a third straight Cy Young award this year, but his Hall of Fame case will become very interesting if he does.

Steven Matz’s return from the injured list should be imminent, according to Luis Rojas.

Todd Zeile—who was a member of the Mets in 2001 when the 9/11 attacks occurred—discussed his experiences and relief efforts in the wake of that tragic day.

Former Met Cy Young winner R.A. Dickey discussed a variety of topics—including Tom Seaver and the absence of knuckleball pitchers in today’s game—in an interview for The Athletic.

Jennifer Lopez and Alex Rodriguez are still trying to improve their offer for the Mets in case negotiations with Steve Cohen falter.

The Phillies and Marlins played a doubleheader yesterday. Aaron Nola threw a 7-inning complete game shutout in Philadelphia’s 11-0 win in the first game, while Miami scored five runs off the Phillies relievers in a bullpenning game to win 5-3 in game two.

The Braves and Nationals went to extra innings, with the latter team winning it in the bottom of the twelfth thanks to a walkoff single by Michael Taylor.

Former Met Neil Walker has been designated for assignment by the Phillies. He has been replaced on the team’s roster by Ronald Torreyes.

Ronald Acuna Jr. had to be helped off the field in yesterday’s game after fouling a ball off his ankle. He’s being listed as day-to-day.

A positive COVID test was reported in the Giants organization, leading to the cancellation of the first two games in their series against the Padres as the league conducts additional testing and contract tracing.

The league is finalizing plans to hold the postseason in a bubble to try to prevent COVID outbreaks.

MLB.com took a look at the nine teams (including the Mets) who are currently chasing a spot in the postseason.

Karleigh Webb wrote for Beyond the Box Score about how baseball could be an agent for social change.

Minor League Baseball still doesn’t have a clear sense of exactly what’s in store for them in 2021 and beyond.

The Rays made history yesterday by having an all-lefty starting lineup.

Joe Sokolowski compiled the most memorable quotes from and about Tom Seaver as we continue to mourn the passing of the Mets legend.