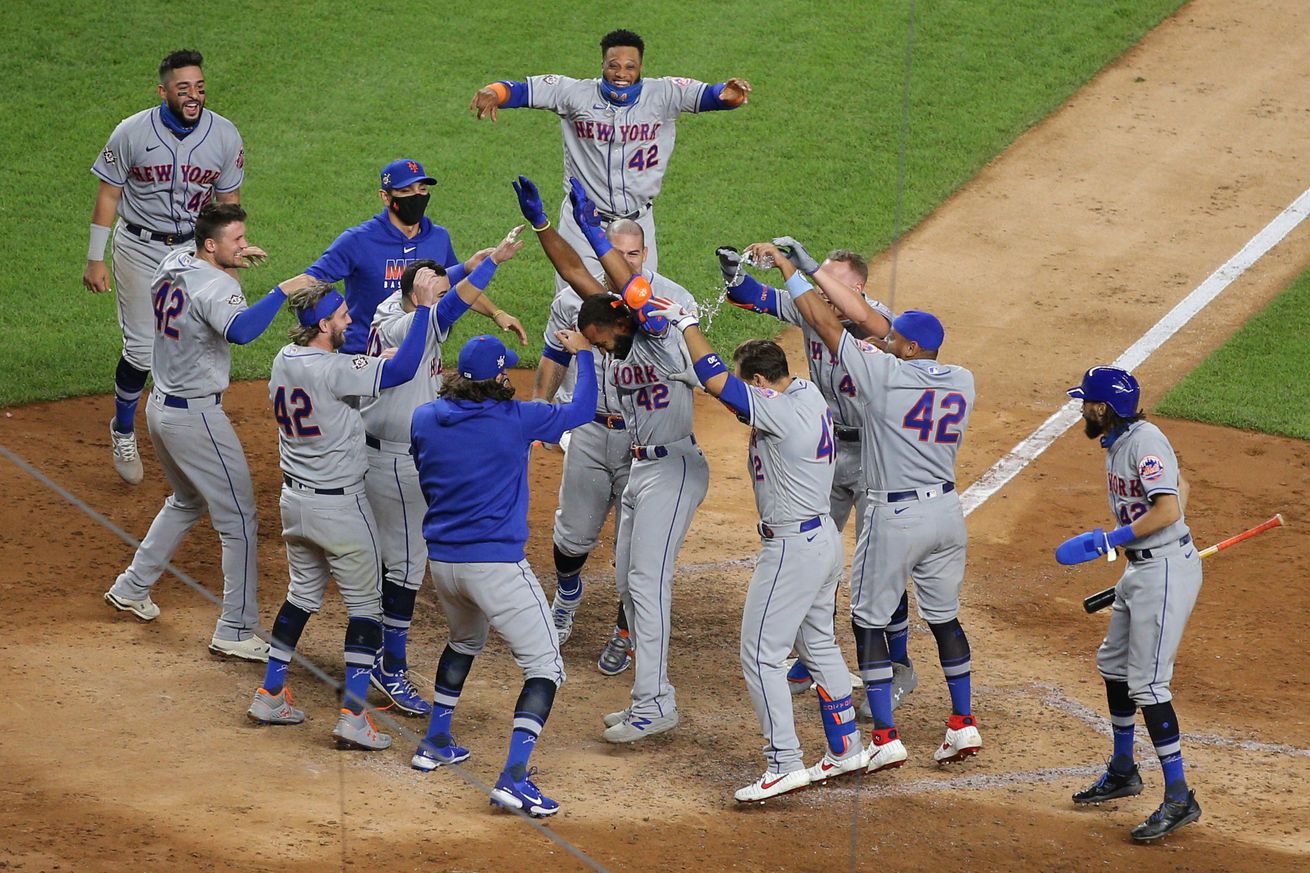 The Mets began a five-game series against the Yankees with a seven-inning doubleheader yesterday and enjoyed two dramatic come-from-behind victories. Pete Alonso, Dominic Smith, and Jake Marisnick all homered in the sixth inning to lead the Amazins to a 6-4 win in the first matchup, while Amed Rosario hit a two-run walk-off home run in the bottom of the seventh in the second game.

After months of endless speculation and rumors, reports broke last night that Steve Cohen is entering exclusive negotiations to purchase the team.

Prior to the doubleheader, the Mets made a series of roster moves, including re-activating Jake Marisnick and Andres Gimenez from the injured list.

Following the first game, the team designated winning pitcher Walker Lockett for assignment to make room on the active roster for David Peterson.

Dellin Betances shared some poignant thoughts about the continued racial injustice that has plagued this country.

Dominic Smith is proving himself to be an impact player both on and off the field.

While the Mets made a meaningful statement with their actions on Thursday night, the Wilpons had to go and conduct themselves as poorly as they normally do.

On the bright side, the younger Wilpon has evidently not been involved in the ongoing discussions about the sale of the team.

Alex Rodriguez and Jennifer Lopez evidently will not be the next owners of the Mets, and they made their disappointment known.

Bench coach Hensley Meulens made his return to the team.

Tomas Nido seemingly confirmed that he was the Mets player who tested positive for COVID.

2019 first-round pick Brett Baty has been added to the team’s 60-man roster pool.

The Mets added another outfielder to their player pool, claiming Guillermo Heredia off waivers from the Pirates.

The makeup game for Thursday’s cancelled affair against the Marlins will be held on Monday at 1:00 p.m.

The Nationals got a whopping 16 hits and put up 10 runs in a decisive victory against the Red Sox.

The Braves mounted a three-run comeback against the Phillies bullpen, but Philadelphia ultimately prevailed in extra innings thanks to a walk-off three-run homer off the bat of Scott Kingery in the 11th.

Sixto Sanchez pitched seven scoreless innings with ten strikeouts, but the Marlins failed to score any runs of their own and ended up falling to the Rays 2-0.

Several MLB players, coaches, and other personnel around the league commemorated the celebration of Jackie Robinson Day.

The number of Black players in the game today remains relatively small, but they are united in making their voices heard.

Shakeia Taylor of Baseball Prospectus wrote an emotional letter to Jackie Robinson in which she reflected upon the lack of progress the game has made since his time.

Jeff Passan argued for ESPN that the relative lack of organization behind the various teams’ protests is precisely what made them effective.

The Astros and Athletics took a page from the Mets and Marlins’ playbook and elected to take the field, observe a moment of silence, and then forego play last night.

The league’s celebration of Jackie Robinson Day was coupled with the devastating news that Chadwick Boseman, the actor who played the legendary baseball figure in 42, passed away at the age of 43 from colon cancer.

The trade deadline season is in full swing, and all thirty teama have their own strategies for how to approach it.

Manny Ramirez is somehow still kicking at 48, as the former star MLB outfielder signed a one-year deal to play in the Australian Baseball League.

Chris McShane and Brian Salvatore discussed the wild events of Thursday on the latest episode of Amazin’ Avenue Audio (The Show).

The 1962 Mets hit a major milestone in mediocrity on this date, as the famously hapless club lost its 100th game of the season.