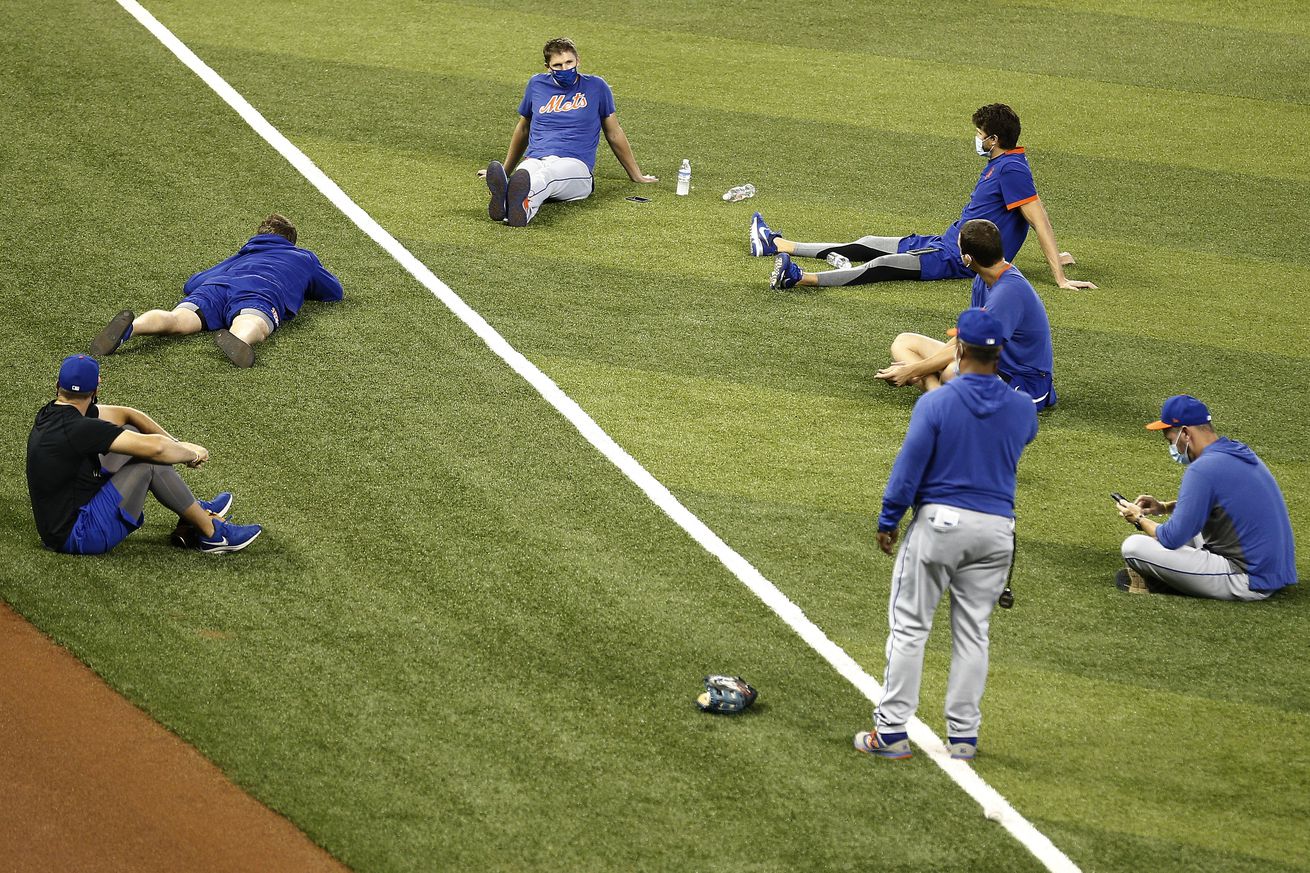 After five days off following two positive coronavirus tests within the organization, the Mets are set to return to action this afternoon at 5:10pm EDT. The team will play a doubleheader with the Marlins, whom they swept in three games down in Miami last week. The Mets will serve as the home team in game one, with the Marlins acting as the “home team” for the evening game, which will commence approximately 30 minutes after the conclusion of the first contest. The series finale between the two teams last Thursday was the first game that was called due to the positive COVID-19 tests.

The team will also make up their postponed Subway Series games with the Yankees as part as two doubleheaders on Friday and on Sunday, in addition to a makeup game on Thursday, September 3, which was originally a day off for both clubs. The Mets will serve as the home team for two of the five games this weekend, though it is not clear which games yet.

The new schedule creates the potential for a crazy Subway Series in 2020.

The Mets are officially back now, and they will be busy. They will play nine games in six days this week, and 34 games in 34 days to complete their sprint to the finish line.

Brodie Van Wagenen spoke to the media. He revealed that the two individuals who tested positive were experiencing symptoms, but they’re doing better now. The symptoms demonstrate that this was not the result of “false positives”.

The club is not aware of how either person contracted the virus. However, Van Wagenen does not believe the positive tests resulted from any sort of breach of conduct.

In total, six members of the organization stayed in Miami: the two who tested positive, and four who came into close contact with them.

This week’s Mets Mailbag looks to answer why the Wilpons are losing money, whether the team will extend Michael Conforto, and how come they are infatuated with Walker Lockett, among other things.

The Nationals have placed pitcher Seth Romero on the IL after he slipping down the stairs on Saturday and broke his non-pitching hand. The team has recalled pitcher Ben Braymer.

The Marlins topped the Nationals 11-8 yesterday behind 17 hits from their offense. Despite needing seven pitchers to top Washington, they were able to outlast their opponents to improve to 12-11.

Prior to the game, the Marlins placed Stephen Tarpley on the injured list and designated Sterling Sharp for assignment.

Jeff Passan posted a special edition of 20 questions for the trade deadline.

Speaking of the quickly-approaching trade deadline, Ken Rosenthal listed five teams that might not do what you think they will do at the deadline. (Paywall Alert)

The Dodgers are this year’s superteam, even if they can’t prove it over a 162-game schedule.

The Blue Jays have placed Trent Thorton on the IL and recalled Travis Bergen to take his place. After adding Bergen to the 40-man roster, the team DFA’d Thomas Pannone.

The Pirates have claimed pitcher Carson Fulmer off waivers from the Tigers and have designated Guillermo Heredia for assignment.

MLB announced that they promoted Noah Garden to Chief Revenue Officer and Chris Marinak to Chief Operations and Strategy Officer.

Brian Salvatore summarized the latest news on the Mets returning to play after having two positive COVID tests.

Steve Sypa provided an update on the CPBL team, the KBO team, and the NPB team that the From Complex to Queens team has been following this year.

Episode 76 of From Complex to Queens went up and focused on the recent spate of top prospect promotions in the league.

The Mets won their 69th game of the 2015 season on this date. Noah Syndergaard got the win after the team put up a three-spot in the sixth inning to erase a 4-3 deficit. Yoenis Cepsedes hit his 25th home run of the season in the victory.