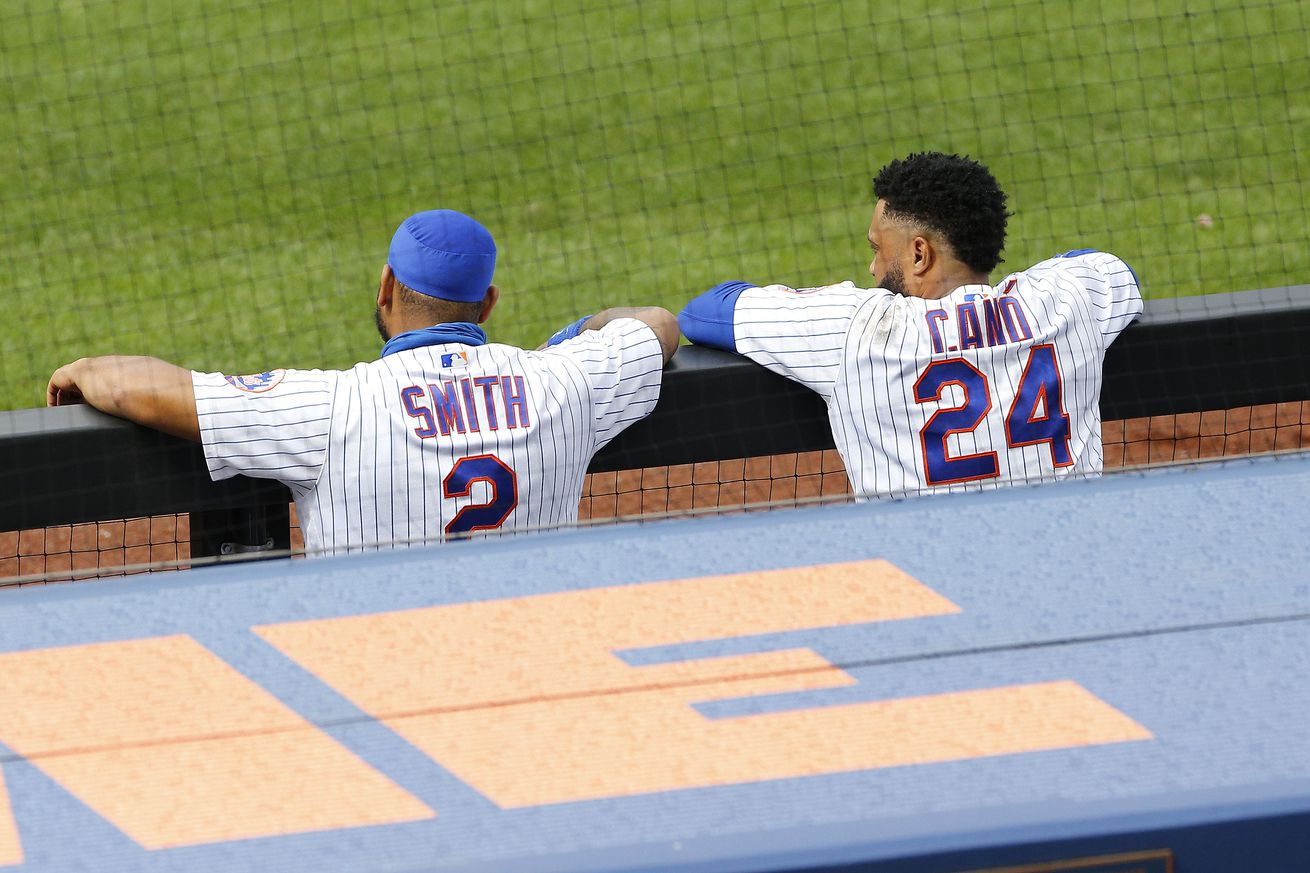 With Jacob deGrom making his fourth straight start against the Marlins, Miami finally got to him in a calamitous sixth inning as New York dropped its fourth straight game. Jeff McNeil rebounded nicely from his recent struggles with two doubles, including one that broke the ice in the third, and Dominic Smith brought in another run with a sacrifice fly, but Miami put up a four-spot in the sixth, helped out by Pete Alonso’s costly error. Robinson Cano hit a home run in the bottom half of the frame, but that was as close as the Mets would get as deGrom suffered his first loss of 2020. In defeat, Amed Rosario drew his first walk of 2020.

While the game was going on, the MLB trade deadline passed with the Mets making three moves at the buzzer.

The team re-acquired Todd Frazier from the Rangers for a Player To Be Named Later.

In a separate deal with Texas, the Mets brought in catcher Robinson Chirinos along with $360,000 in cash for another Player To Be Named Later.

In their final deal, the team picked up reliever Miguel Castro from the Orioles for prospect Kevin Smith and either A Player to Be Named Later or cash.

Justin Toscano looked at why the team made these trades when it did.

David Lennon asked whether the team should have made the moves that it did.

Prior to acquiring Chirinos, the Mets were interested in Jason Castro and also were reportedly eyeing Red Sox catcher Christian Vazquez.

The Mets brought up reliever Hunter Strickland and optioned reliever Drew Smith to the alternate site.

J.D. Davis is officially listed as day-to-day, and Luis Rojas hopes that he can return during the team’s series in Baltimore.

Steven Matz is battling left shoulder bursitis, while the team does not have an official diagnosis yet for Dellin Betances. However, the news from the evaluation on Betances yesterday was “good”.

Juan Lagares, who was recently designated for assignment, declined his assignment and elected free agency.

The Mets-Willets Point subway stop is typically busy between baseball and the US Open this time of year, but it has fallen silent this year.

The Shea family has expressed interest in owning a small stake in the franchise, a generation after declining the opportunity.

In perhaps the most stunning trade of the day, the Marlins proved they were serious about contending by acquiring Diamondbacks outfielder Starling Marte. The Marlins parted with Caleb Smith, Humberto Mejia, and a Player To Be Named Later.

The move comes as Miami prepares for a postseason run.

In another move, Miami dealt away second baseman Jonathan Villar to the Blue Jays. In return, they got Griffin Conine, who is the son of former Marlin Jeff Conine.

The news comes on the heels of the report that Marlins second baseman Isan Diaz intends to return after opting out earlier this year from the 2020 season.

Behind another solid start from Cy Young contender Max Fried, the Braves bested the Red Sox 6-3 in Boston to maintain their three-game lead on the National League East.

The Braves did not make any moves on a busy day of deals, and Atlanta’s Alex Anthopoulos explains why they stood pat.

The Phillies outlasted the Nationals 8-6 to keep pace with the Marlins for second place in the NL East. The Nationals, meanwhile, fell to seven games back as they sit in last place.

The Phillies bolstered their bullpen by acquiring David Phelps from the Brewers.

Philadelphia also has spoken to J.T. Realmuto’s representatives. He is set to become a free agent this offseason and will be one of the most sought-after prizes of the winter.

In the biggest blockbuster of the 2020 trade deadline, the Padres acquired starter Mike Clevinger from the Indians, along with Greg Allen and a Player To Be Named Later. San Diego sent pitcher Cal Quantrill, outfielder Josh Naylor, catcher Austin Hedges, and three minor league prospects in the deal.

The Padres also got right-hander Taylor Williams from the Mariners for a Player To Be Named Later.

In the strangest trade deadline ever, the Padres went all in.

The Oakland Athletics tried to bolster their pitching staff by acquiring Mike Minor from the Rangers for two Players To Be Named Later.

The Blue Jays were busy at the deadline, picking up starter Robbie Ray from the Diamondbacks and second baseman Villar from the Marlins. Toronto traded left-handed pitcher Travis Bergen in return for Ray.

The Rockies picked up Kevin Pillar along with cash considerations from the Red Sox for a Player To Be Named Later and international slot money.

The Cubs bolstered their outfield depth by picking up Cameron Maybin from the Tigers.

The Reds picked up closer Archie Bradley from the Diamondbacks and outfielder Brian Goodwin from the Angels ahead of the deadline.

The Dodgers traded pitcher Ross Stripling to the Blue Jays for two Players To Be Named Later.

The Giants acquired left-handed pitcher Anthony Banda from the Rays.

It’s the age-old trade deadline question: Who won and who lost on deadline day?

While trades were going on, it was announced that the Athletics and Mariners will be postponed through Wednesday to allow for additional testing and contact tracing.

Tracy Ringolsby looks at the evolution of the baseball card, from hobby to passion.

Allison McCague covered the trades with the Rangers, while Lukas Vlahos discussed the Mets bringing in Castro from the Orioles.

Steve Sypa provided an update on the CPBL team, the KBO team, and the NPB team that the From Complex to Queens team has been following this year.

Episode 77 of From Complex to Queens went up and discussed Bud Fowler, the earliest known African American player to play professional baseball.

On this date in 1975, Tom Seaver struck out 10 Pirates to become the first pitcher in major league history to strike out 200+ in eight consecutive seasons.