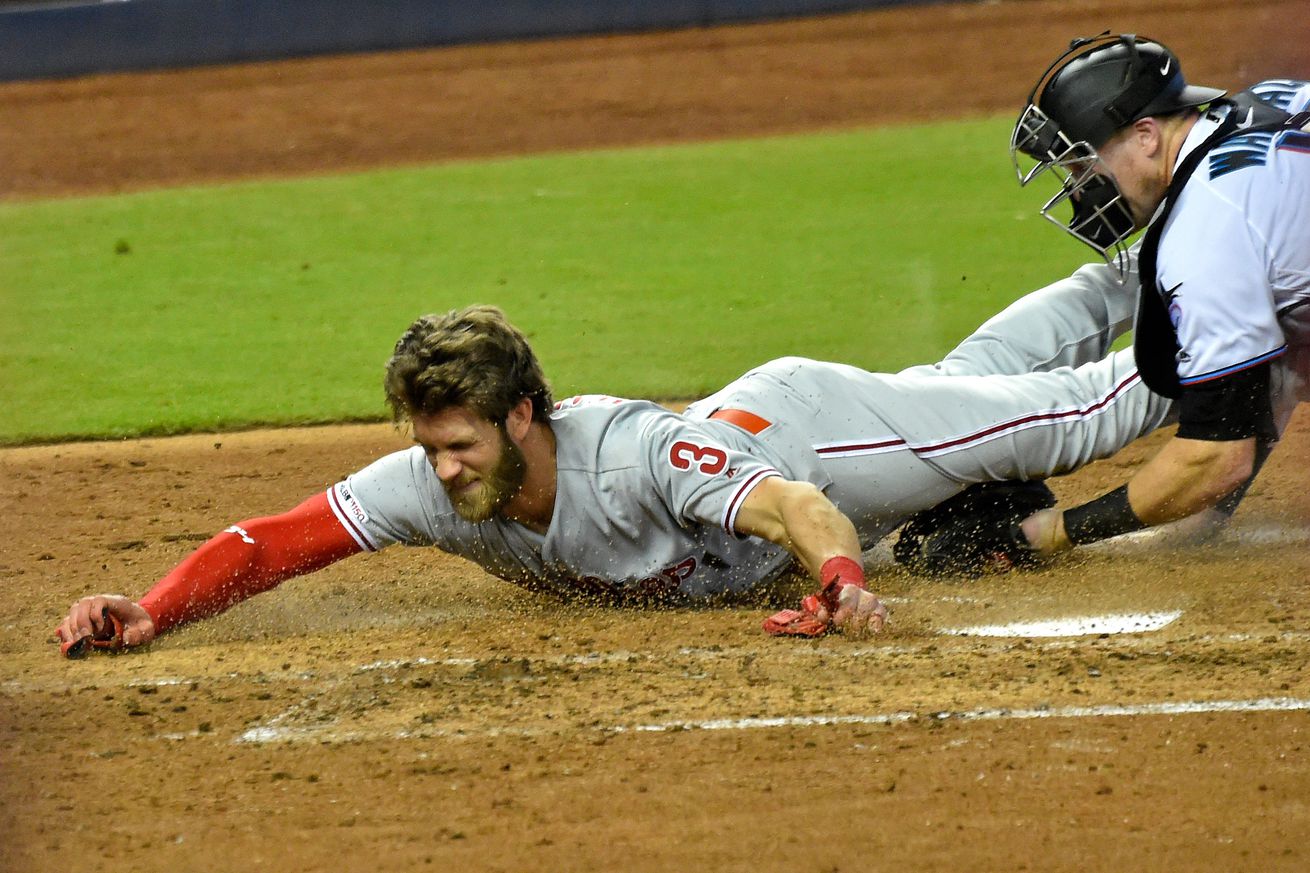 The New York Mets (9-6) will get their first shot at the new-look Philadelphia Phillies (9-5) as they travel to Citizens Bank Park for a three-game set against their division counterparts. New York trails Philadelphia by a half-game in the division entering play today.

The Mets have bested the Phillies in seven straight season series dating back to 2012. Last year, New York took 11 out of 19 contests while splitting the 10 games the two teams played in Philadelphia.

The Mets are coming off a somewhat disappointing series split against the Atlanta Braves at SunTrust Park. While it’s hard to be too distraught about taking two out of four on the road — especially in a place that has been as notoriously unkind to the Mets as Atlanta has been — they put themselves in a prime position to earn a series win by taking the first two games. The Mets got out ahead of the Braves thanks to solid starts from Steven Matz and Zack Wheeler on Thursday and Friday, respectively, and the offense in turn put up six runs in each contest to help the Mets take over sole possession of first place in the division.

Momentum swung drastically on Saturday night, as Jason Vargas had a nightmarish start, followed by an equally nightmarish relief appearance by Corey Oswalt. The Mets fell behind 9-4 after four innings and couldn’t quite recover as they lost by an 11-7 score. On Sunday, Jacob deGrom was shaky again as he allowed three runs on five hits while walking four and striking out nine in five innings. While he fared much better than he did in his start against the Minnesota Twins, his location was still off and he allowed two more home runs for a total in five over his last nine innings. A trio of Mets relievers were unable to keep the Braves off the board, which resulted in a 7-3 defeat.

The offense continues to be the bright spot for the 2019 club, as they put up 22 runs on 39 hits across the four games. Brandon Nimmo — who looked lost at the plate in the early part of the season — has begun to break out a bit as of late. After going 0-for-4 on Thursday, he picked up three hits in four at-bats on Friday after being dropped to the eighth spot in the lineup, and he came off the bench on Saturday to contribute a run-scoring single in two plate appearances. On Sunday, Nimmo added two more hits in five at-bats. While his 41.0% strikeout rate is still a cause for concern, he has a perfectly cromulent 111 wRC+ to go along with a .350 OBP and a .762 OPS, which suggests that he’s close to figuring things out.

Amed Rosario also picked up a hit in three out of the four games this weekend, including a three-hit night on Thursday which included his first home run of 2019. Rosario has hit the ball well so far this year, posting a .254/.313/.373 slash line with a modest 83 wRC+. Like Nimmo, he’s also posted a higher-than-normal strikeout rate at 29.7% in the early part of this season, but overall he’s been picking up extra base hits and generally contributing on a nightly basis.

On the other hand, Rosario’s double play partner, Robinson Cano, has continued to scuffle early on. In 14 games, Cano has put up a 50 wRC+ and a .183/.234/.317 slash line. The back of his baseball card suggests that he will certainly figure this out, but getting his bat going will add an additional threat to this lineup and will make it feel even deeper than it already does. The Mets have to hope that this will happen sooner rather than later.

The Phillies come into this series having won nine of their first 14 games in 2019, including two out of three against the last-place Miami Marlins over the weekend. Philadelphia come in with a number of new faces, many of whom will look familiar to Mets fans. Over the offseason, the Phillies added a number of new components to a team that finished in third place with an 80-82 record in 2018. They acquired shortstop Jean Segura in a trade with the Seattle Mariners, added former New York Yankees reliever David Robertson to fortify their bullpen, and picked up All-Star catcher J.T. Realmuto in a trade with the aforementioned Marlins.

The blockbuster move, however, didn’t happen until February 28, when they announced the signing of former Washington Nationals outfielder Bryce Harper to a record-breaking 13-year contract. The move has paid immediate dividends for the Phillies, as Harper is hitting .280/.438/.600 with a 159 wRC+ and a .320 ISO, which is good for a 0.8 fWAR. Segura has also looked like a smart pickup early on, as he’s hitting above his career averages in most offensive categories. So far, he’s put up a .317/.369/467 slash line with a 121 wRC+ and a .150 ISO, which translates to a 0.5 fWAR. Conversely, Realmuto has struggled to get it going with his new team, as he’s hitting just .234/.315/.319 with a 72 wRC+ with the Phillies.

The final line from Syndergaard’s last start (7-plus innings, 5 hits, 4 earned runs, seven strikeouts) doesn’t do his performance against the Twins any justice. Thor was completely in control and dominated for the first time in 2019, as he held Minnesota completely in check for the first seven innings. He exhibited excellent control and movement on all his pitches and was at his best until he began to tire out a bit to begin the eighth inning. Despite the four earned runs, he did not allow a walk while striking out seven for the second time this season. It was an all-around encouraging outing for Syndergaard as he prepares for what should be an entertaining pitcher’s duel against Nola.

Nola came in a distant third in the National League Cy Young race last season but put together a breakout performance with a 2.37 ERA and 224 strikeouts in 212.1 innings. In looking to replicate and surpass his performance from last year, Nola has gotten off to a rocky start this season. After holding the Braves in check on Opening Day, he has since allowed 11 runs (10 earned) in his last two starts, each against the Nationals’ potent lineup. He’s only struck out five while walking three and allowing 12 hits (including five home runs). His last start was an improvement, as he pitched into the seventh and threw 69 of 99 pitches for strikes. Nola owns a 6-1 lifetime record against the Mets with a 3.35 ERA in nine starts.

Matz has certainly been a pleasant surprise for the Mets this year, as he’s allowed only three earned runs across his three starts. On Thursday, he picked up his first decision in his last nine tries as he earned a win against the Braves while allowed two earned runs on four hits in six innings. He matched his season-high with eight strikeouts and generally looked very good after the second inning. His biggest problem so far this season (and in his career) has been keeping opponents off the board early in games, but so far this season he has not let things get away from him as the game progresses. If he can improve on this (and, of course, if he can stay healthy) the sky’s the limit for the Long Island native.

Pivetta has had a rough go of it this year, as he’s allowed at least four runs in each of his three outings and has failed to make it past five innings in any of them. The Nationals pounded Pivetta in his last start and scored seven runs against him in 3.2 innings en route to a 15-1 victory. The former fourth round draft pick has given up an alarmingly-high 24 hits in just 13.1 innings pitched so far. The Phillies will need the 26-year-old Pivetta to do better, as their rotation beyond Nola and Arrieta is dangerously thin.

Wheeler had his best start of the young season on Friday in Atlanta, as he held the Braves to two earned runs on six hits over six innings. Wheeler picked up his first win of the season and struck out eight. He walked three which is a drastic improvement from his last outing but is still more than you’d like to see him dish out in a game. Still, he threw 69 of his 111 pitches for strikes which is a step in the right direction. His numbers at the hitter-friendly Citizens Bank Park have been surprisingly solid, as he owns a 3.96 ERA in four starts and has earned three wins there. Even with those numbers, this will be the best Phillies lineup that Wheeler has ever seen and will present an interesting challenge for the right-hander on his path to prove that his second-half numbers from last season were no fluke.

Arrieta has been just what the doctor ordered for the pitching-starved Phillies. While he is no longer what he was in his prime with the Cubs, he’s been a stable addition to their rotation and has gotten off to a great start this year. He dominated the Marlins in his last start on April 12, holding them to just five hits and one run over seven innings. He’s picked up three quality starts in three tries so far in 2019, although he has walked 10 in those games (including six in his first start against the Braves). Arrieta has been a thorn in the Mets’ side for a while now, as he owns a 2.34 ERA in 10 starts against them.

Prediction: The Mets will win one but will ultimately drop their first road series of 2019.