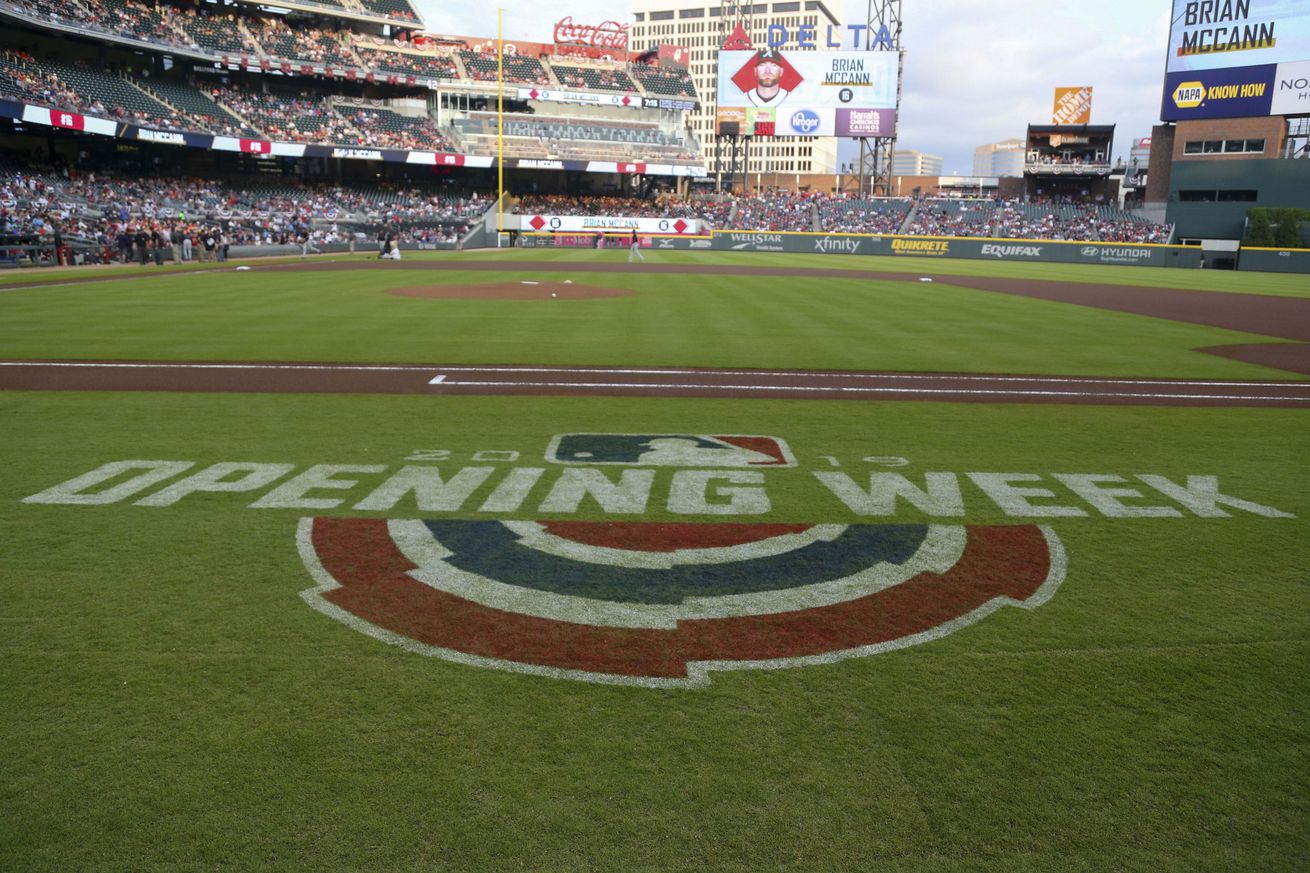 The New York Mets embark on a ten-game road trip through Georgia, Pennsylvania, and Missouri which begins with a four-game showdown against the defending National League East champion Atlanta Braves.

The Mets and Braves enter play today with identical 7-4 records and share first place in the division with the 7-4 Philadelphia Phillies. Last year, the Braves defeated the Mets in 13 out of 19 contests, including winning six out of nine at SunTrust Park. The Mets did come back to win the last two games against Atlanta in the second-to-last series of 2018.

The Mets are coming off what can best be described as a strange series split with the Minnesota Twins. In the opening game, Jacob deGrom looked human on the mound for the first time since 2017. It was unsettling watching deGrom struggle, as he was charged with six earned runs in four innings. Like they have all season long, the Mets’ lineup kept battling back, and like they have all season long, the Mets’ bullpen kept surrendering runs, making the lead feel insurmountable. The final result was a 14-8 loss that ended the team’s seven-game winning streak against the Twins.

On Wednesday, the Mets earned a 9-6 victory to head off on their road trip on a high note. New York put up a six-run fifth that featured one of the most bizarre sequences in recent memory. After Jeff McNeil’s one-out single, Twins pitchers proceeded to walk six of the next seven batters. The only hitter who didn’t walk was Brandon Nimmo, who was hit by a pitch on a 3-0 count to force in a run. In total, Minnesota threw 28 balls against just eight strikes during this meltdown. Staked to the lead, Noah Syndergaard was strong but tired a bit in the eighth inning as the Twins made their own comeback attempt. In the end, Edwin Diaz shut the door while allowing one run in the ninth.

The Mets continue to be led by their offense. Even though Michael Conforto and Pete Alonso saw their three-game home run streaks end yesterday, they’re still by far the two best hitters on the team at this moment. Conforto enters tonight’s game with a 1.134 OPS, which comes in second to Alonso’s 1.313 OPS. Alonso leads the team with five home runs, a .512 ISO, a 230 wRC+, and a 0.9 fWAR, while Conforto leads the team with seven multi-hit games.

Atlanta enters tonight’s game on a three-game winning streak after a snow-shortened two-game sweep of the Colorado Rockies. After getting swept on opening weekend in Philadelphia, Atlanta has won seven of their next eight games. Dansby Swanson has gotten off to a scorching-hot start in 2019, posting a .324/.419/.765 slash line and a 180 wRC+ over 11 games. He currently leads the team with a 0.6 fWAR and owns a share of the lead with four home runs.

Matz is still searching for his first victory of 2019 despite pitching reasonably well. So far, he’s been relatively successful in keeping runs off the board, as he’s been charged with just one earned run over his two starts. In his last outing against the Washington Nationals, he navigated past a high pitch count in the first two frames and gutted out five shutout innings against a very good offensive team. Though he walked four in total, he struck out eight total in the start while giving up just two hits. While the end results have been encouraging, the Mets will need Matz to pitch deeper into games given their early-season bullpen struggles. This start would be a good place to start, as Matz has pitched surprisingly well against the Braves. In seven career starts, Matz is 4-0 with a 2.75 ERA and a 1.09 WHIP against Atlanta. In two career starts at SunTrust Park, he’s allowed just one earned run over ten innings.

Gausman was impressive in his season debut against the Miami Marlins, as he struck out seven while allowing just two hits and walking two over seven shutout innings. He needed just 88 pitches to complete his outing and threw 61% of his pitches for strikes. The change in scenery has worked to Gausman’s benefit, as he’s posted a 2.57 ERA, a 3.59 FIP, and a 1.08 WHIP in 66.2 innings across 11 starts since being traded by the Baltimore Orioles to the Braves last July.

There is no sugarcoating just how bad Wheeler was in his last start. He walked a career-worst seven batters and threw 52 of his 103 pitches for balls. As a result, he couldn’t escape the fifth inning and put the Mets in a hole they were simply unable to escape despite an improbable late-game rally. Wheeler has been charged with 11 earned runs in just 9.2 innings and has almost as many walks (eight) as he has strikeouts (nine). His velocity has been fine, but his location has been way off in his first two starts. There’s plenty of time to correct his issues and reclaim some of the dominance he demonstrated in the second-half of 2018, but he will need to do it quickly. The Mets need Wheeler to become, at the very least, a dependable starter if they want to seriously complete in a stacked National League.

Just two years removed from going fifth overall in the 2017 MLB Draft, Wright opened the season as part of Atlanta’s rotation thanks in part to a bevy of injuries suffered by their starters. Wright features four pitches, including a 95-plus fastball to go along with his curveball, slider, and changeup. He debuted out of the pen last September and was charged with three runs over six innings, which included an outing against the Mets on September 26 in which he surrendered solo home runs to Conforto and Dominic Smith in an inning of work. In his first career start, he allowed three earned runs on two hits while walking five in 4.1 innings against the Phillies, but he came back in his next start and allowed two earned runs in six innings while walking one. While it took him 85 pitches to navigate his first start, it took just 77 to get through six his last time out. Control has been a prominent issue so far in his young career, as he’s handed out 12 free passes in 16.1 innings.

Vargas will make his first start since April 2, as his last turn was skipped over due to an abundance of off-days early in the season. He made a relief appearance against the Twins on April 9 and didn’t do much to win over fans who have been calling for the teams to part ways with the lefty. In ninth inning mop-up duty, Vargas allowed four hits — including a home run — and was charged with four earned runs. To be fair to the beleaguered 36-year-old, his only start of the year was not catastrophic, as he earned a victory against the Marlins while allowing two runs on eight hits. Despite the positive result, the last-place Miami squad hit him hard all game long, and he was lucky to escape with a lead. With every subpar performance, the calls for the team to sign Dallas Keuchel will only grow louder and louder, so the pressure will be on for Vargas to pitch more like his 2018 second-half self in order to silence his critics and help his team.

Much like Wright, Newcomb went in the first round of his MLB Draft class. He was selected 15th overall by the Los Angeles Angels in 2014 but arrived in Atlanta by way of trade following the 2015 season. Since debuting making his debut for Atlanta in June 2017, he’s put up respectable numbers, including a 3.96 ERA, a 4.14 FIP, and 273 strikeouts in 275 innings. In his first start this season, he shut the Chicago Cubs out through four innings but could go no further after tossing 91 pitches. In his second game, he allowed two earned runs on four hits against the Marlins. He has enjoyed great success against the Mets, as he owns a 1.82 ERA over six starts against New York.

With one bad start, all of Jacob deGrom’s incredibly and truly historic streaks came to an end against the Twins last Tuesday. In his worst start since 2017, deGrom lasted just four innings while allowing six earned runs on eight hits. He only struck out three batters and allowed three home runs. It’s unclear whether the early rain delay or the cold weather played any part, but deGrom refused to place the blame anywhere other than squarely on himself, saying “Tonight’s on me. I was bad out there. That’s all there was to it.” He mostly stuck to his fastball early on, as his slider and changeup were not working as well as they normally do. As a result, he had trouble putting opposing batters away, which resulted in a lot of full counts early on which drove his pitch count above 50 in the second inning. Even with someone as great as deGrom, bad starts are to be expected, and you can expect him to rebound and get back on track sooner rather than later. If nothing else, this proves that deGrom is, in fact, human.

The Mets have seen plenty of Teheran over the years, as the nine-year veteran has been a stalwart of Atlanta’s starting rotation since the 2013 season. He’s no longer the same guy who finished fifth in the Rookie of the Year voting in 2013 and who made the National League All-Star team in 2014 and 2016, but he’s still not someone to overlook. After enduring a rocky April last season, he settled down and posted a 2.97 ERA, a 3.89 FIP, and a 23.8% strikeout rate across ten starts in August and in September. So far in 2019, he’s lasted exactly five innings in each of his three starts. After allowing three runs on Opening Day and taking the loss against the Phillies, he recovered to surrender just one run against the Cubs on April 3 in the no decision. His last time out against the Rockies, he gave up six earned runs on five hits but was able to pick up the win despite the unsatisfactory results. As always, it’s worth noting that Teheran gives the Mets fits. In 24 career starts against them, he’s posted a 2.39 ERA and a 1.05 WHIP with 117 strikeouts (his second-most against any opponent). There is also a chance that the Braves may start Mike Foltynewicz if he is ready to return from the injured list on Sunday, which would push Teheran back one day.

Prediction: The Mets settle for a series split against the division rival Braves.