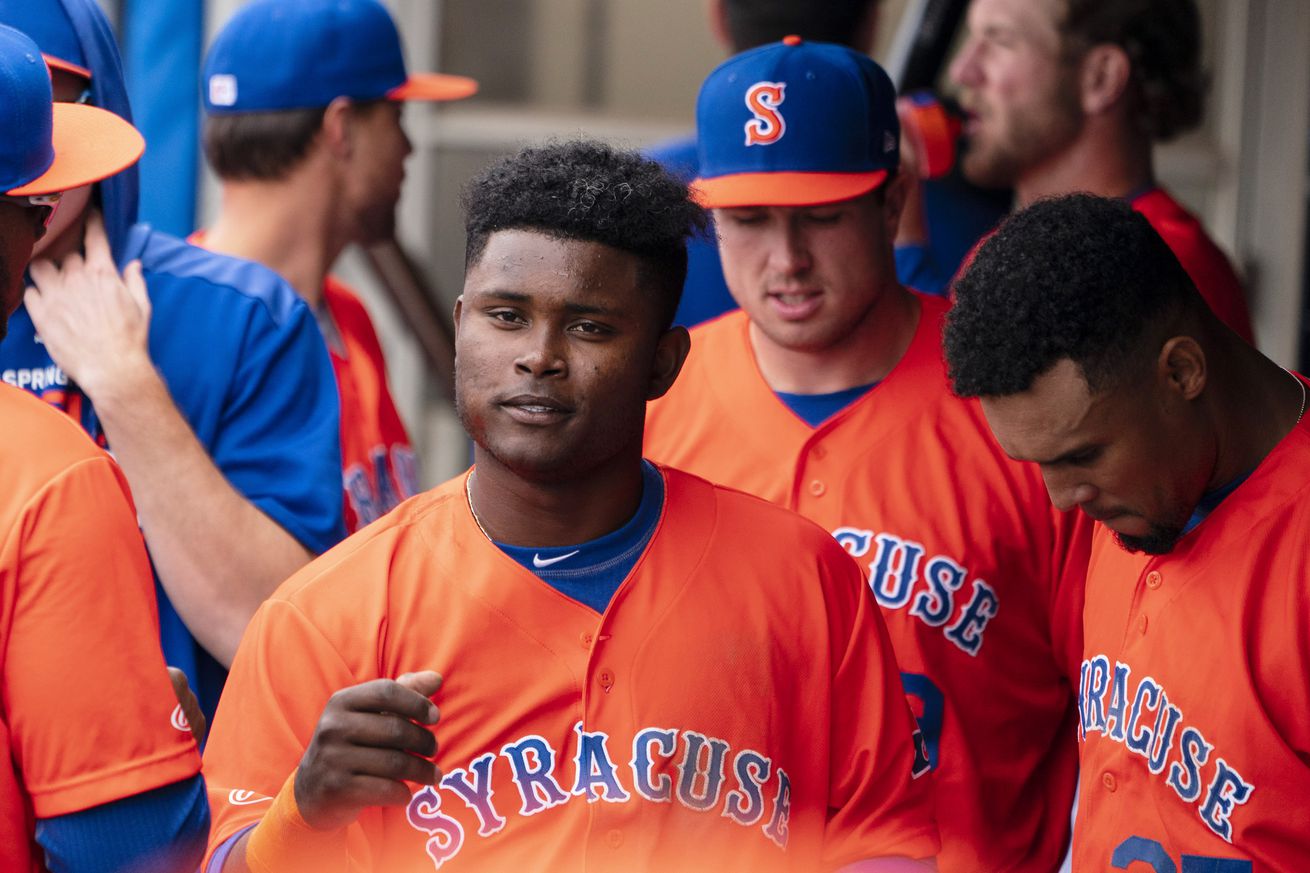 Catch up on all the Mets prospects in yesterday’s minor league action!

The Syracuse Mets lost 3-2 to the Rochester Red Wings in the first game of their double-header on Tuesday. Hector Santiago started for Syracuse, and kept them in the game through five innings, allowing just two runs on a Tomas Telis RBI single in the bottom of the second, and a Tomas Telis solo-shot in the bottom of the fourth. Santiago ended up going five innings, allowing two runs on five hits and two walks. Syracuse remained down two runs until the top of the sixth inning, when Dilson Herrera tied the game at two with a two-run shot to left field. Unfortunately for Syracuse, the game did not remain tied for long. Tim Peterson entered the game in relief of Santiago in the bottom of the sixth, and surrendered a homer to Rochester’s Zander Wiehl which proved to be the difference in the game. Syracuse was unable to score in the top of the seventh and ended up losing to Rochester 3-2.

Syracuse got on the board in the top of the third inning, when Gregor Blanco tripled to deep center with Tim Tebow on first. Danny Espinoza followed up by singling Blanco home from third. The Mets added an insurance run on a Adeiny Hechavarria sacrifice fly that drove Rene Rivera home from third. Threes runs proved to be more than enough for the Mets’ pitching staff. Ryan O’Rourke, Corey Taylor, Tyler Bashlor, and Arquimedes Caminero combined to throw seven scoreless innings in the shortened second game of the double-header, and held the Red Wings to just two hits on their way to a 3-0 victory.

Anthony Kay struggled in Tuesday evening’s matchup between the Binghamton Rumble Ponies and the New Hampshire Fisher Cats. The Fisher Cats got on the board in the first inning, when Kay allowed New Hampshire’s Chad Spanberger to single home Joshua Palacios from third. Kay settled in a bit following his rocky first inning, and cruised through the next two innings before giving up a solo shot to New Hampshire’s Kevin Smith to open the fourth. New Hampshire added an additional two runs on back to back doubles off Kay in the fifth inning, effectively ending his outing with his team down 4-0 after 4.2 innings of work. Stephen Nogosek and Adonis Uceta kept Binghamton in the ballgame, and each contributed multiple innings of scoreless relief. The Binghamton Rumble Ponies scratched across a run in the bottom of the ninth inning, when Andres Gimenez followed up a Sam Haggerty double with an RBI single, but ultimately lost to the New Hampshire Fisher Cats 4-1.

Neither team’s offense showed up for Tuesday’s game between the St. Lucie Mets and the Fort Myers Miracle. Tony Dibrell allowed a run in the top of the first inning, when he surrendered a sacrifice fly to Trevor Larnich, which allowed Akil Baddoo to score from third. Dibrell settled in from there, contributing 6.2 innings without allowing another run. Unfortunately, the Miracle run scored in the first inning proved to be the only run scored in the game. St. Lucie managed just two hits and three walks against the Fort Myers pitching staff, and struck out 10 times on their way to losing 1-0. Todd Frazier went hitless in his tenth rehab appearance, and is now hitting .200/.282/.200 in 35 at bats as his rehab assignment nears its conclusion.

The Columbia lineup never really got into gear yesterday afternoon, as they managed just one run on five hits against the Rome Braves in yesterday’s 8-1 loss on the road in Rome, Georgia. Jose Butto got the start for the Fireflies and generally pitched pretty well, allowing a lone unearned run in six innings of work. Butto allowed just three hits and a hit-by-pitch in his six innings of work, and struck out four in his first quality start of the season. After falling behind 1-0 in the bottom of the second, Columbia evened the score at 1-1 in the top of the fourth when Hayden Senger singled home Chandler Avant from third. That would prove to be the extent of the scoring for the Fireflies, who left a total of 13 runners on base against the Rome pitching staff. While Jose Butto gave the Fireflies a chance to win, the Columbia bullpen was unable to keep the game close. Chris Viall took over for Butto and, after throwing a scoreless seventh, gave up a run on back to back leadoff hits – including a double from Rome’s Carlos Paraguate – to start the eighth. Billy Oxford entered the game to replace Viall with one out and a runner on third in the eighth, and allowed all five of the hitters he faced to reach base. By the time Oxford was removed in favor of Jose Moreno, Rome had scored an additional six runs in the inning, giving the Rome Braves an 8-1 lead that proved to be enough to give the Columbia Fireflies their seventh loss of the season.

Star of the Night

Goat of the Night