I’m not sure there’s a narrative that this game fits.

And that’s fine. Because not every game has to contain a greater storyline on the state of the team. Sunday’s loony game might have had that, but Monday’s game was just ridiculous and should be treated as a gem among rocks. It might be the kinds of gem you find in a Cracker Jack box, but a gem nonetheless.

First, just consider that Dave Jauss was the manager because Luis Rojas was serving the first game of his two game suspension for acting like a kid whose Happy Meal didn’t have a toy. Then to start the game, Pete Alonso and Jeff McNeil homered to give the Mets a 3-0 lead. But in the first two innings, Luis Guillorme made three errors, two on one play in the second to bring home five unearned runs to help the Reds to a 7-3 lead. When the best defensive shortstop you have looks like a cross between the Spanish Armada and Gregg Williams calling a cover zero, that’s when you throw your hands up and think this game is just weird.

But that was only the beginning, as 7-3 down is nothing to a team that stared 6-0 in the face on Sunday. Michael Conforto homered to make it 7-5 in the 4th. Pete Alonso singled to make it 7-6 later in the inning. Dom Smith then homered in the 5th to tie the game 7-7. But Jesse Winker doubled to bring home the go ahead run in the 7th and then went to give the bullpen some strange pep talk when he went out to the outfield for the next inning. 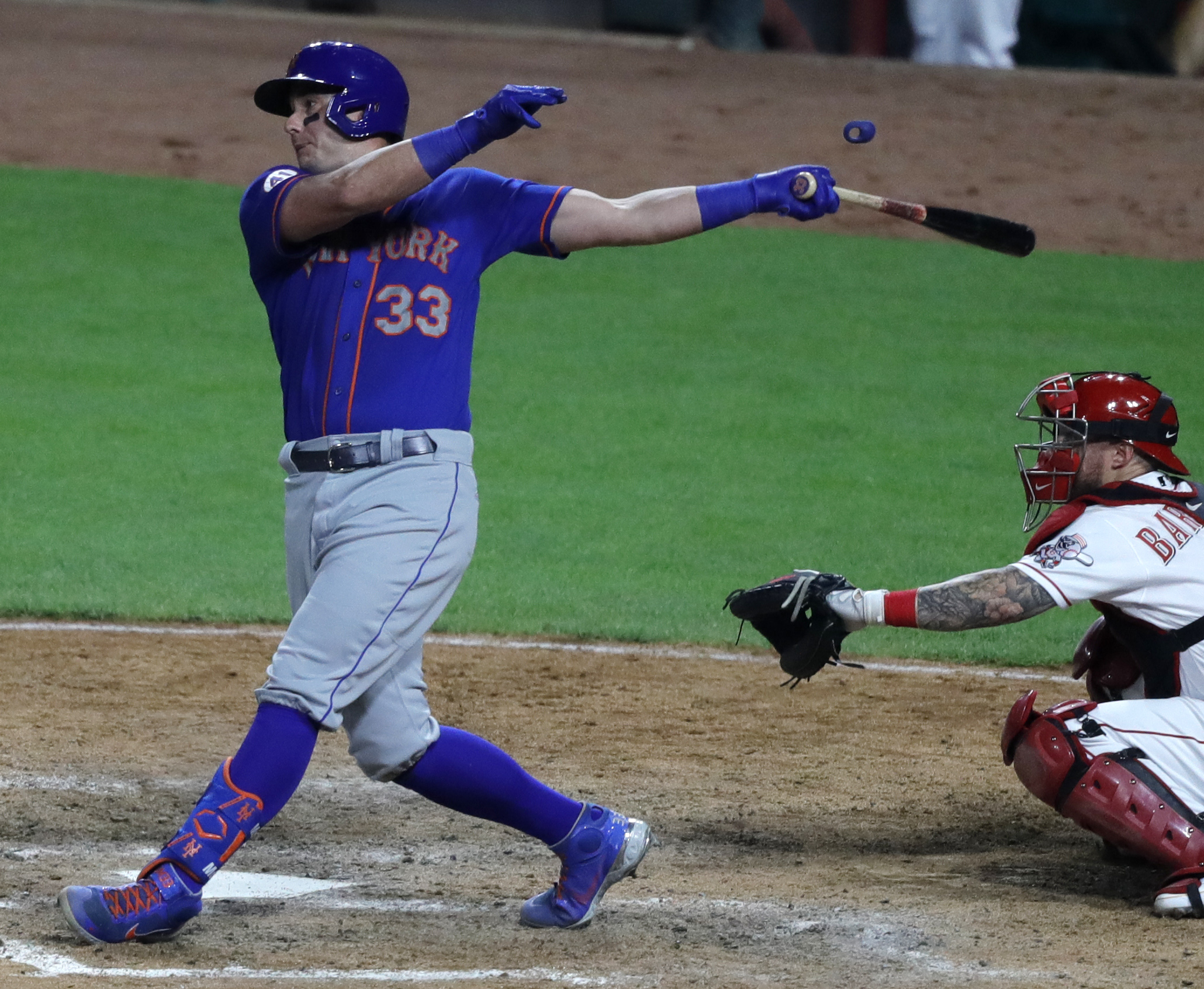 Great speech, Sparky. Jauss pinch hit catcher for catcher in the 8th, a move that comes fraught with peril if you don’t have an emergency catcher, and fraught with more peril when the second catcher is 0-for-his-last-11. But James McCann hit a two run home run to make it 9-8 Mets. Like, how did Jauss even know? What posssible rationale does one have for something ridiculous like that? But on a night like Monday, for all the words of tongue and pen the ones that matter are: “F*** it, it worked”.

In the 9th, it was time to send in the clowns … for Gary Cohen to shoot. Winker was up with the tying run on second, and Ron Darling presciently noted that while it’s not generally a good idea to put the winning run on base, that maybe this was the time to do it. Gare, meanwhile, said that Diaz had never blown three straight saves i his career. Gare, who has shot many clowns in his career, committed circus genocide with that one as he shot clowns, firebreathers, and jugglers. The next pitch … THE NEXT PITCH … Winker doubles home the tying run. Great call by Ronnie, and goddamnit Gare stop mudering circus performers.

McCann did it again in the 10th as he drove home the runner of ghost with a single. But the Mets could give their next pitcher no more wiggle room, and that pitcher was somebody named Anthony Banda, who I thought might have been a Seinfeld character. In reality, he came to the Mets for Will Toffey, who himself had come to the Mets when they traded Jeurys Familia. When Banda gave up a single to Tyler Naquin on a really tough at-bat to tie the game with nobody out in the 10th, I just hoped the end would be quick. But in victory and defeat, this team loves torture. Banda got a double play off Eugenio Suarez, and ended the inning by getting Shogo Akiyama to fly out. The torture continues.

So it was on to the 11th where the Reds out manuevered the Mets in the realm of head scratchers. After a Nimmo single to start the inning and send Blinky to third, Edgar Garcia struck out Alonso to bring up Jeff McNeil. Now, a base was open (second), the Mets had no more position players left to pinch hit for Banda, who was on deck, and they were seemingly down to Hank Parker and Hisanori Takahashi in the bullpen. But instead of walking McNeil to pitch to Banda, the Reds decide to pitch to McNeil. It worked about as well as Jesse’s speech.

Jeff McNeil comes through in the 11th and the Mets have the lead once again! pic.twitter.com/RIODnAujCY

I mean, we would have taken a coney, but this is a good gift too.

Banda then grounded out, but Kevin Pillar hit a huge … HUGE homer to give the Mets a 14-10 lead, and Conforto hit his second bomb of the game to make it 15-10. You’d figure that would be enough, but Mets fans know better. Banda got the first out of the bottom of the 11th, but two singles made it 15-11. So with Nick Castellanos coming up and Rick Camp grabbing a bat, Trevor May came in and got Castellanos to fly out without apology, and struck Mike Freeman out to end the damn thing 15-11. I mean, if May was available we could have avoided all this nonsense last inning, but it wouldn’t be the Mets if they didn’t give you an extra helping of goofy, right? Robert Stock pitches for the Mets tomorrow at Great American Ballpark. Maybe in honor of Game 6 of the NBA Finals, the two teams will shoot for a basketball score this time.

I blame Jacob deGrom’s forearm for this.