Welcome back to the substitute Gameday, the only Gameday that recently bought a BedJet to ensure a comfortable 9 hours of sleep each night.

Tonight, the Penguins welcome a Flyers team that they defeated 5-2 on Tuesday night back to the Paint Can for Game 2 of a 3 game mini-series, the first of its kind this season for the Penguanos.

Tuesday night really felt like the ultimate shit or get off the pot game for the Pens.  They welcomed fans back into the arena just hours after Crosby was added to the COVID list, reunited Malkin with Guentzel and Rust and really needed Malkin to step up, didn’t see much of the puck after the first 20 minutes at 5-on-5, and still managed to bury 4 goals at 5s by the Flyers while putting a powerplay goal in the back of the net too.

Sid and Todd will remain out tonight, as will Dumo and ERod, both of whom returned to practice and are getting closer to a return.

On the topic of the powerplay, which has been good at times and very bad at times this year, let’s collectively pay attention to what they do the rest of this mini-series.  In the first games of these 2 game series so far this year, they’ve outperformed themselves in the 2nd game in terms of generating high danger chances, expected goals, and actual goals. 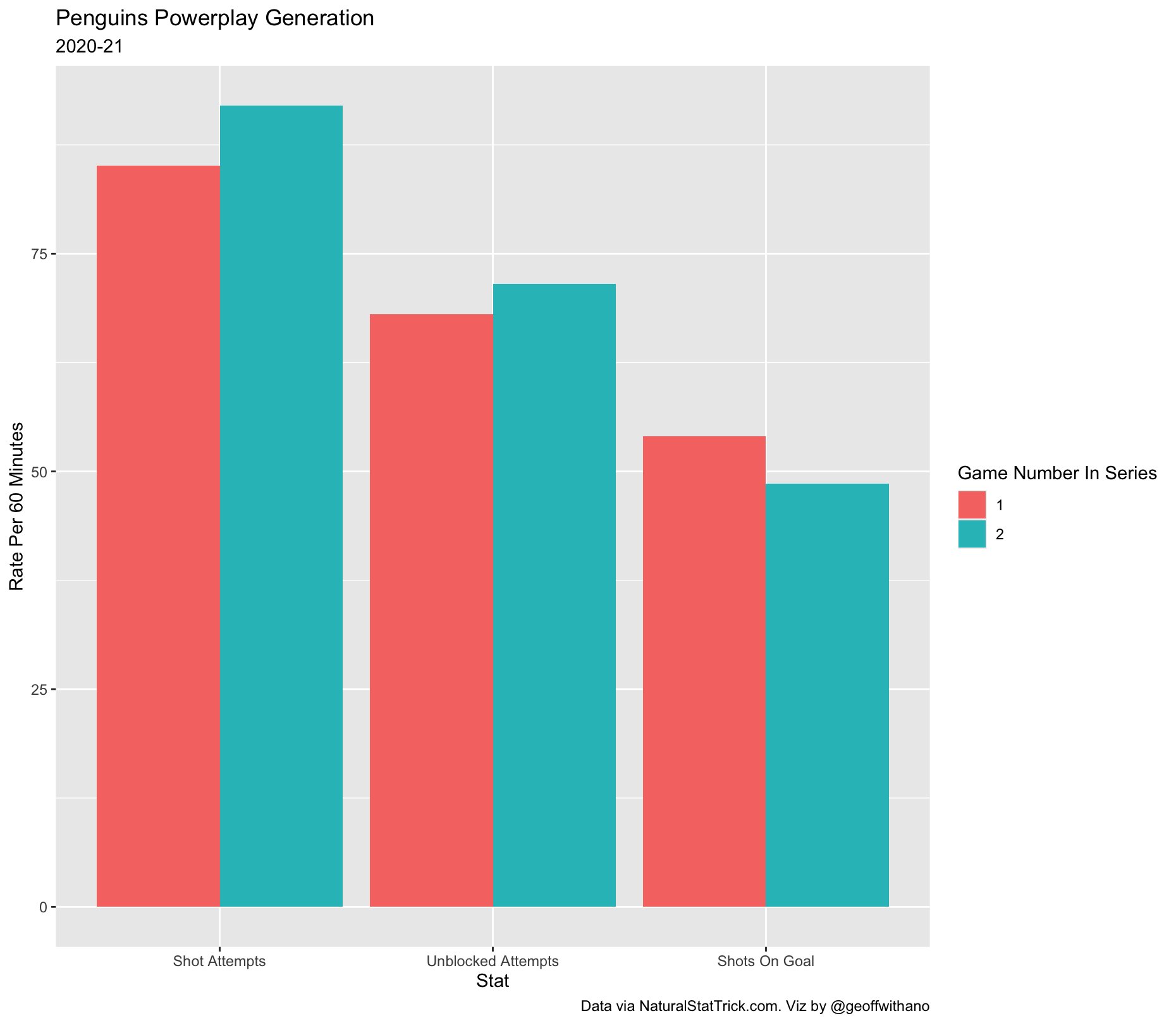 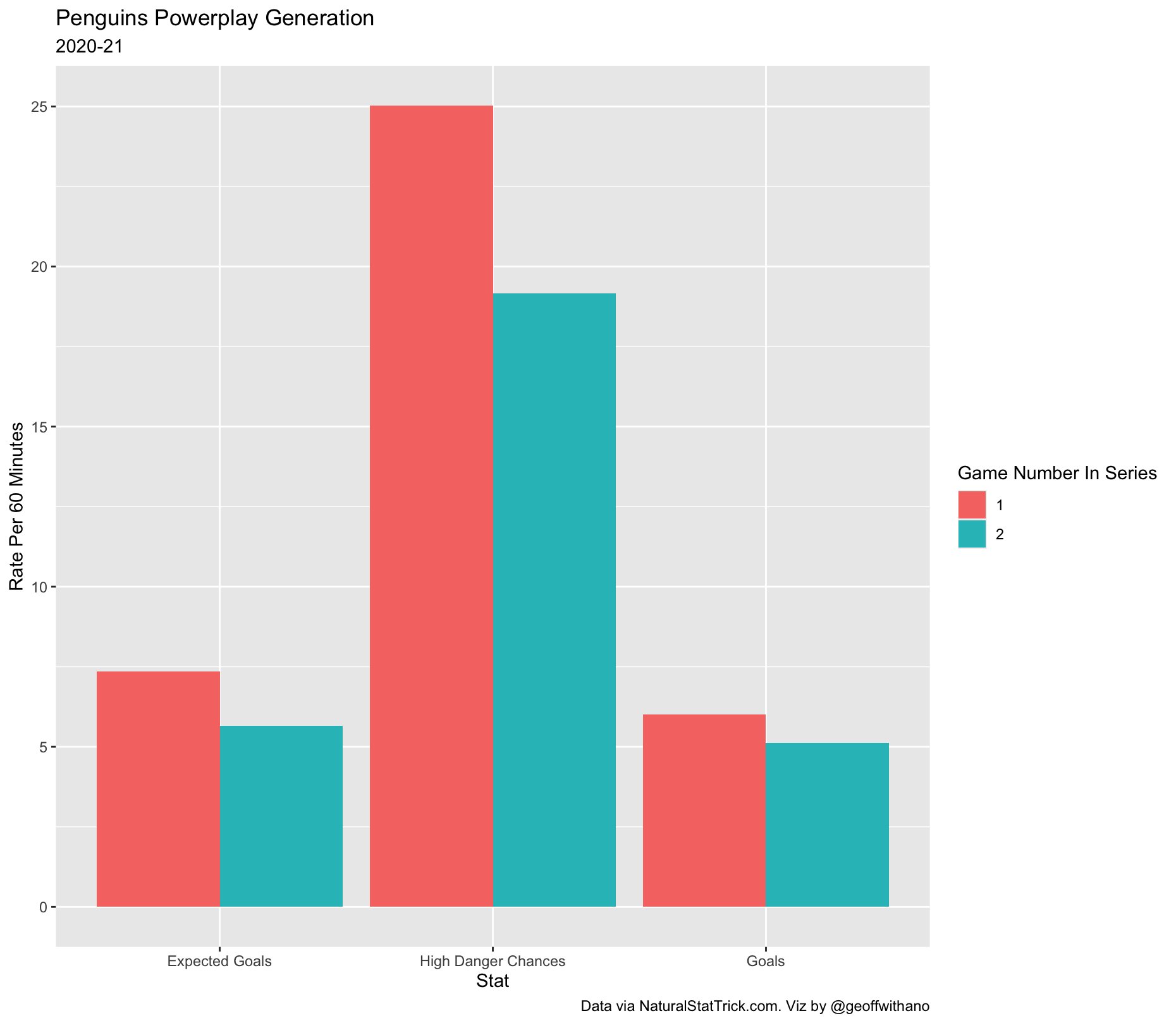 Could be something.  Could be nothing.

Despite falling to the Pens in regulation, the Flyers still sit in 4th place in the division, one spot above the Penguins.  They each have 25 points, but the Flyers have two games in hand.  A loss in any capacity tonight will drop them out of a playoff spot as we near the midpoint of the season.

Even after adjusting for score and venue at 5v5, they’ll look to build off of how they finished the final 30 minutes of Tuesday’s game.  It may have been virtually over after Rust made it 3-1, but Philly did control 56.74% and 72.32% of the score and venue adjusted shot attempts at 5v5 in the 2nd and 3rd periods, respectively.

That said, in terms of the expected goals and overall quality of shots, it was still a pretty Penguins-centric game. 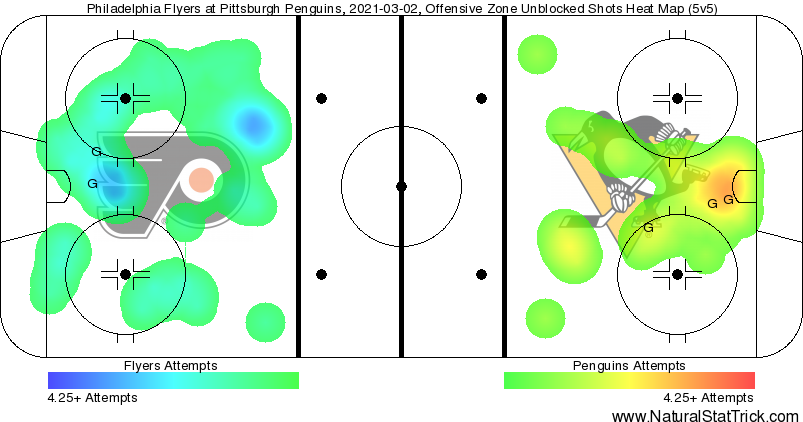 You would probably expect the Flyers to turn back to Carter Hart tonight, even in the face of Mike Matheson ripping his soul from his whole ass body on Tuesday.

This one will definitely make you smile

Update: Brian Elliott will start for the Flyers.  Hart is day-to-day (still looking for his soul).

So, it’s Jarry vs. Elliott tonight.

Keep an eye on Joel Farabee tonight, who has 10 goals this season and 15 of them have come against the Penguins.

All data via Natural Stat Trick