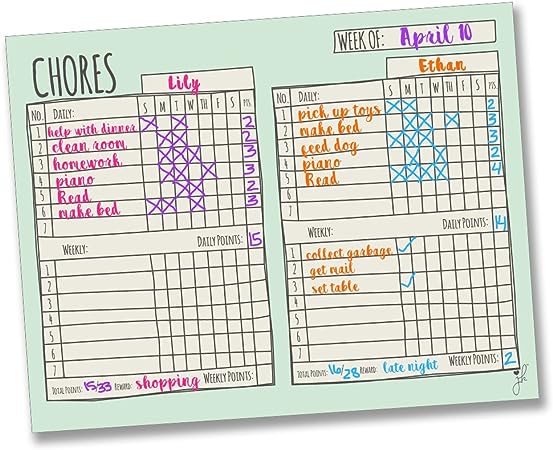 Okay, how many of you had a chore chart as a kid? And for the parents out there, how many of you have foisted one of these on your kids? Maybe foisted isn’t the right word to use. I understand for some kids, they need that visual and tangible reminder to “make the bed.” For parents, it then helps them tally the amount for a weekly allowance, if the allowance is tied to doing chores. In my house growing up, we weren’t given an allowance. The belief was that there should be no money tied to doing what was expected of us. The goal of the chore chart is to teach responsibility. I think for kids, they really get the enjoyment if they can successfully complete more chores than their siblings. And or course for parents, if they see that more of the tasks are completed, it hopefully means they have less to do themselves after a long day and week at work. Because let’s face it, I know I hate taking out the trash. However, we have to do it ourselves because there are no children in this house to assign these tasks to. Oh well.

The Minnesota Wild have a chore chart of their own. In this four-game roadtrip to the southwest, they haven’t quite ticked off enough tasks. Now it appeared the first game, that they would have ticked off a win, but we all know how that turned out. Zach Parise’s selfishness was a bit like the kid who rushes through their chores trying to tick as many off as possible but not quite fully completing the tasks. Now if only Parise had hurried off the ice to make a timely line change, we probably wouldn’t have had that result. Instead, we have a couple of blanks where we should have had a couple of checkmarks. Of course that first blank was a partial checkmark since the game went to overtime. Yet at the same time, I don’t even want to allow for partial completion of the task since the game never should have gone to overtime. And then Parise was rewarded first line time after being a healthy scratch. Oh to have been a fly on the wall during Parise’s private meeting with head coach Dean Evason.

Now last night, we managed to finally check off a win on this roadtrip. I’ll admit, there were moments where I worried that we were going to have a repeat of Monday night. When the score was 4-0, I’ll felt like I was sitting on needles. I know, I know, one should be able to feel comfortable with a 4-0 lead heading into the third period, but this is the Minnesota Wild we’re talking about. And sure enough, it took under five minutes into the third period for Arizona to tally their first goal of the night. I know for myself, I wasn’t surprised that the goal came from Clayton Keller. And that goal came early enough in the period, that it was possible for the Coyotes to rally back. Thank goodness that didn’t come to fruition, because if it had, I probably would have wanted to throw something at the computer we were watching the game on.

I also have to say that I was happy to see Kaapo Kahkonen back in goal. I’m still shaking my head as to why Cam Talbot started both games. You usually start the hot hand, and let’s face it Kahkonen was the hot hand. So then when Kahkonen started last night, I was a bit worried that he was going to be cold. Thankfully that not the case. Of course now I wonder if Kahkonen will be afforded the same chance to play two consecutive games now that Talbot is back in the lineup. I don’t know about you, but Kahkonen stepped up when former Wild goaltender Alex Stalock went on injured reserve and hasn’t let up since. When you have a second goaltender as successful as Kahkonen is and you’re wondering if he’s the future in the net, you have to give him more time in goal. This is a team that clings to the starting goalie-backup goalie tradition a bit too much. Considering the goalie mess we’ve had over the years due to trading away guys like Anton Khudobin and Darcy Kuemper you have to wonder if the front office really knows what they’re doing when it comes to goaltenders. A few previews ago, I discussed goalie controversies on this team. I’d kind of like to not keep up with that trend.

It will be interesting to see if the Minnesota Wild can at least turn in a half successful chore chart with a win tonight. Because remember, this upcoming week, it’s like we get a do-over of this week’s chores, as we’re playing two games against Vegas and three against Arizona, but at home this time. And no one should like a messy home. Perhaps though, we should add “power play” to the Wild’s chore chart, but then that just might be futile.