I’m terrible at posting on September 11th. I have no great inspiring story on where I was that day. I was asleep. My mother woke me up with a phone message to say “don’t go into the city, a plane hit the World Trade Center.” Then I got a call from my boss that said “I need you to go into the city, I’m headed downtown for this.” This was before anybody had a real scope of what was happening. I got one stop on the train before they shut all transportation into Manhattan down. By the time I got back home, both towers were down.

We’ve been through a hell of a lot since then, collectively. People more closely affected by that hellish day still go through it. Every day. Everyone that lives, works, and was in New York that day will never, ever, forget what happened. We couldn’t if we tried, regardless of what your hashtag says. To those of you who are still going through it, I send my thoughts and my heart out to you. You’re the ones we should never, ever, forget.

The pregame ceremonies were great, although FOX sticking a bunch of commericals in the middle of it was weird. Was everybody on the field just standing around during the commercial breaks? If you were there, that part of it had to be weird.

Also, the special uniforms that the Mets wore were sharp. 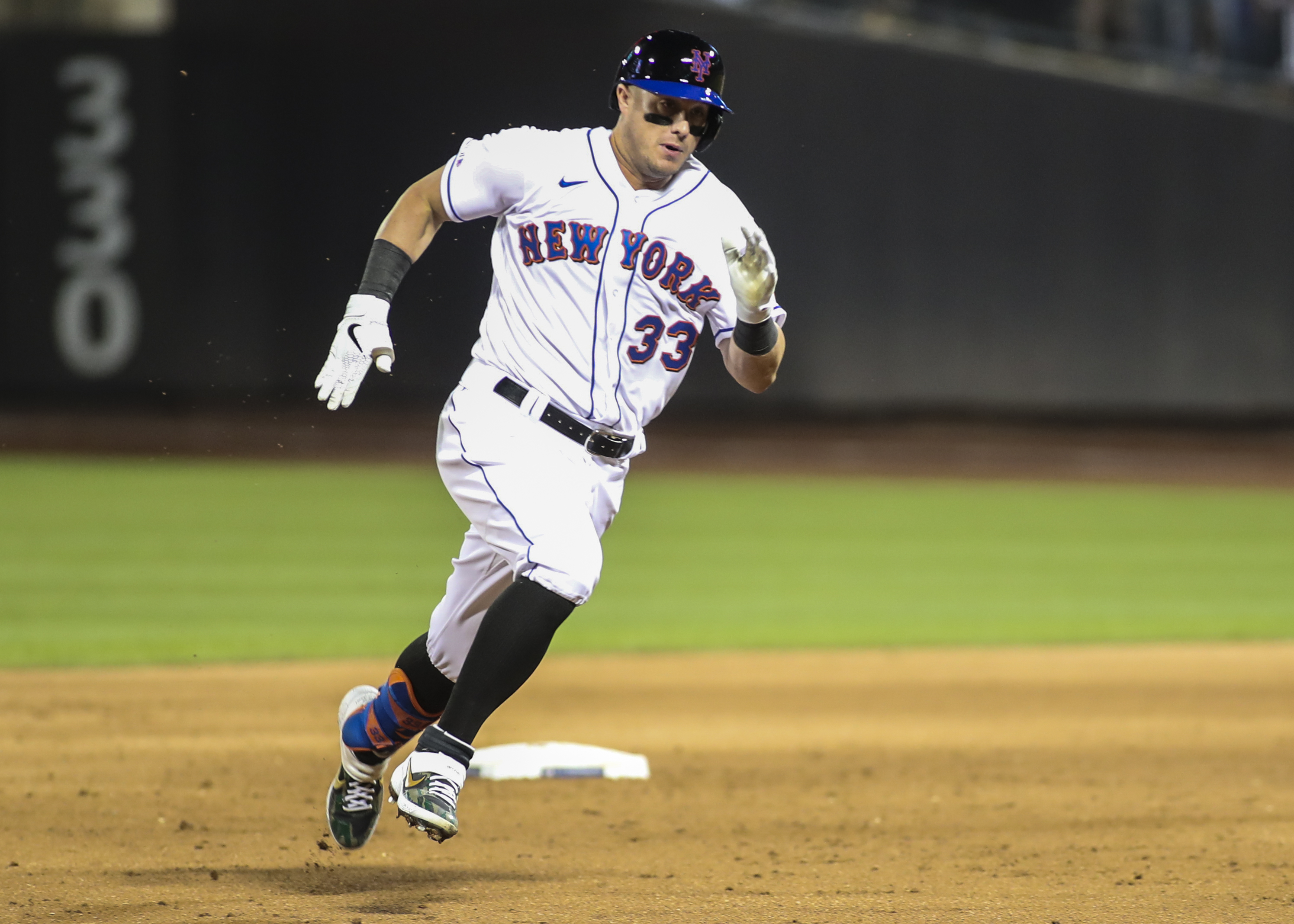 As for the game, the gopher ball that has been haunting Taijuan Walker struck again … three times in the top of the 2nd as Kyle Higashioka, Brett Gardner, and Aaron Judge all went deep to give the Yankees a 5-0 lead. But as we were all wondering why Smart Water left Walker in the game, the Mets stormed back with three in the bottom of the inning on an RBI double by Kevin Pillar, an RBI triple by James McCann, and … get this .. an RBI single by Walker to cut the gap to 5-3. If ever there was a more unlikely three batter sequence than that (well mainly because of the last two), I haven’t heard of it yet. Javy Báez homered to make it 5-4 in the 3rd, and Walker also made it through six innings and retired 13 straight Yankees since the Judge home run. I guess there really is enough Smart Water in the world.

After Lucas Luetge walked Jeff McNeil to open the bottom of the 6th, Aaron Boone brought in Chad Green to try to put the squash on the rally. It backfired miserably. Green struck out Pillar, but then McCann (yes, McCann) sent a screamer over the orange line to give the Mets a 6-5 lead after being down 5-0. They added a run in the 7th as Javy Baez hustled to beat out a single that was overturned, and Pillar brought him home with a single to make it 7-5.

Trevor May came in to protect a two run lead in the 8th, but Brett Gardner singled and Aaron Judge hit his second home run of the game to tie the game 7-7. May then gave up a single to Giancarlo Stanton and Rojas brought in Aaron Loup to face Anthony Rizzo plus two. Rizzo flied out, but Gleyber Torres singled on a smash that Francisco Lindor couldn’t handle. Luke Voit then came in as a pinch hitter and Voit hit into what could have been, should have been a double play. But Báez rushed the throw a bit and threw it way over Pete Alonso’s head for an error which brought home pinch runner Andrew Velazquez and the Yankees had an 8-7 lead. 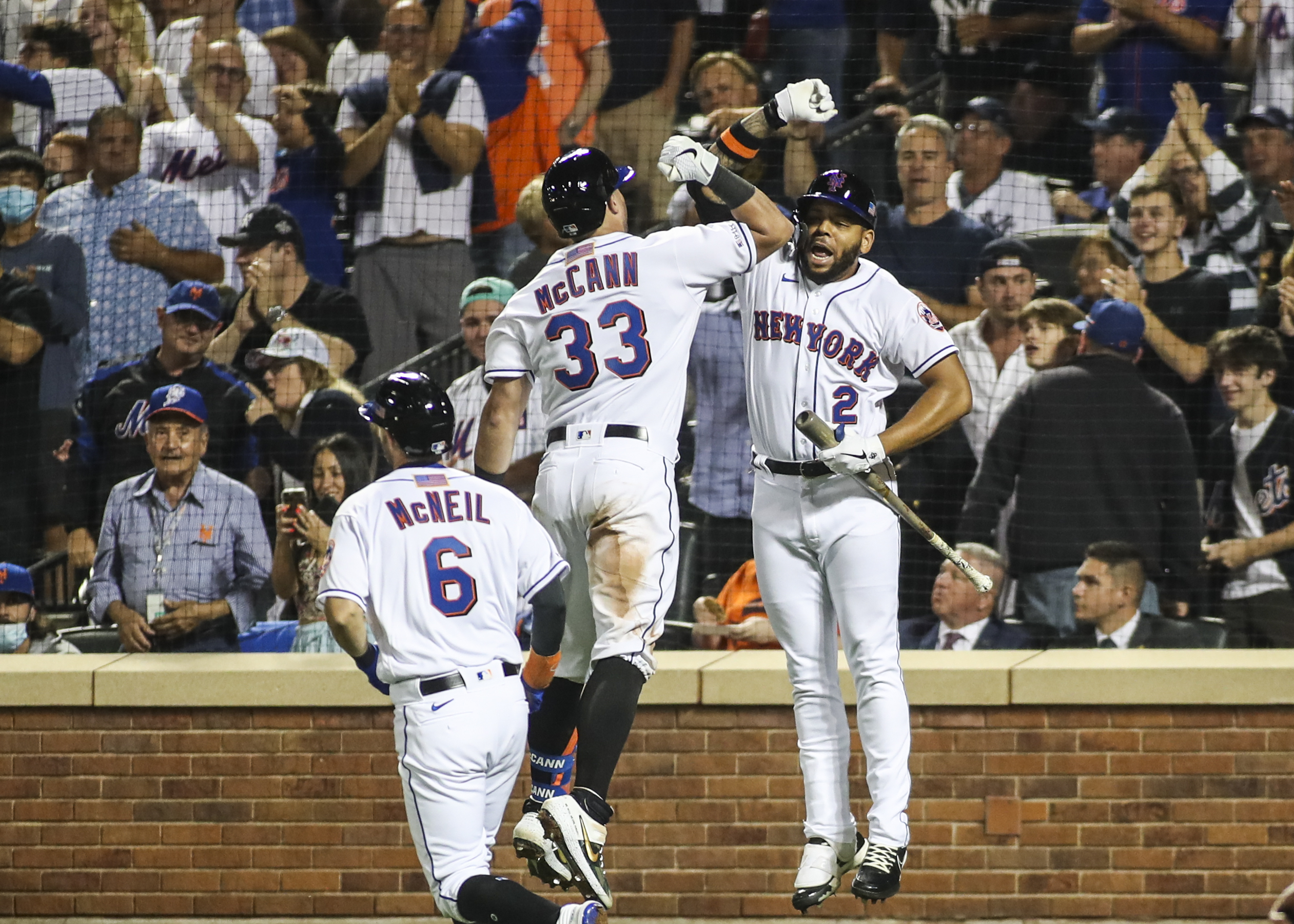 The Mets rallied with two outs in the bottom of the 8th, putting two runners on to bring up Pete Alonso, and Alonso tagged one to center field, but somehow it didn’t go out. Instead, falling harmlessly into Brett Gardner’s glove to end the inning and start the flashbacks of the final out of the 2000 season. Then in the 9th, the situation we would have signed up for: down by a run, facing Aroldis Chapman. Báez hit him hard but Aaron Judge made a diving catch. J.D. Davis, pinch hitting for McNeil, doubled down the right field line. Then, Chapman struck out Pillar on a splitter but the ball got away from Higashioka. If Pillar had realized this about a second sooner, he’s safe at first. But he didn’t, and he wasn’t. He was out by a half step.

That left James McCann, who had a chance for the night of his life after a triple and a homer. All he needed was a little knock to tie the game with Davis having gone to third on the wild pitch. But McCann flied out harmlessly to Judge and the Mets went down to defeat. It was a crazy night of baseball that, just like 20 years ago minus ten days, made you remember that there are joys in life. While we will never, ever forget what happened 20 years ago, hopefully baseball will always be around to make you forget about life’s mundane and normalized craziness.

Here’s normally where I would try to tie this all together in a neat package, but trying to tie the last 20 years into a neat package is something that the world’s greatest scholars won’t be able to do in a paragraph, let alone an idiot blogger like me. I thank you for reading my drivel much the same. Love you guys, lots.

The two idiot fans who ran out on the field like this was a night filled with fun and merriment. If it was, you’d still be idiots. Tonight? I hope the room they store you in has spikes lined with lemon juice.