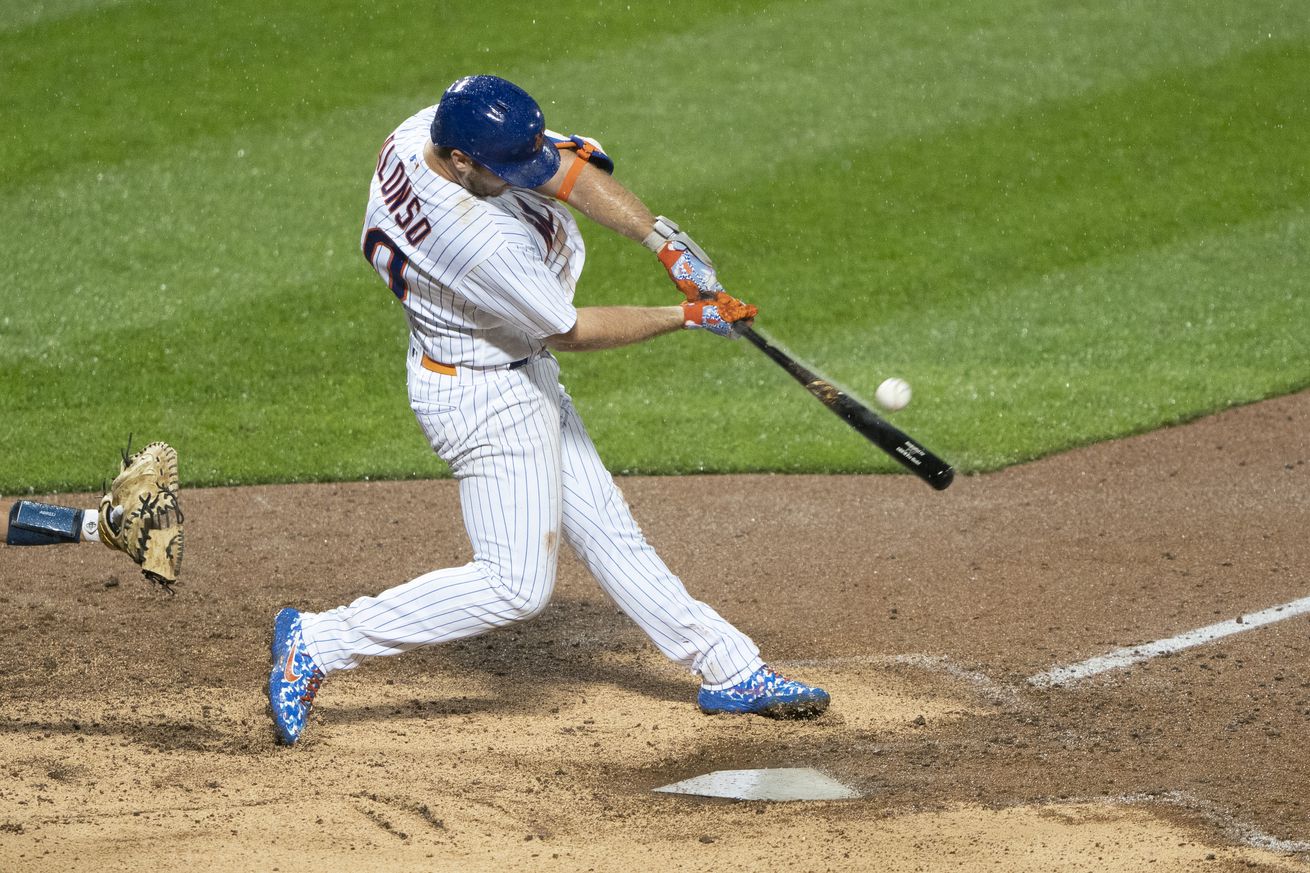 Pete Alonso put a capper on a multi-comeback performance

When Howie Rose began the first segment on WCBS after the Mets’ walk off win tonight, he said something really powerful: “The only thing that would have made tonight more special is if you had been there.” The ‘you’ in that sentence was us, the fans, who cannot experience the 2020 season in person. This feels like the type of game that would’ve rocked Citi Field to playoff levels had fans been there, despite the rain. But, for most of the game, that possibility seemed as far away as the playoffs of 2015.

This was the final meeting between the Mets and Yankees this season, delayed from the Mets’ COVID-19 related hiatus a few weeks ago. Robert Gsellman got the start this afternoon at Citi Field and, despite a walk to Luke Voit, got out of the first inning unscathed. The second inning would not be so kind to Gsellman.

The second inning began with a ground out by Mike Ford, before the parade of baserunners began. A single by Gio Urshella, a walk to Brett Gardner, and a single by Kyle Higashioka loaded the bases with one out. A Tyler Wade single, a DJ LaMehieu sacrifice fly, and a a Voit double brought in four runs for the Yankees. Walks to Aaron Hicks and Clint Frazier would close the book on Gsellman after one and two-thirds of an inning.

Chasen Shreve took over for the Mets and pitched two and a third innings of scoreless ball, despite looking shaky in the third inning. Jeurys Familia also contributed two scoreless innings, attempting to keep the Mets in the ballgame.

Mets’ hitters took the opportunity and ran with it, chipping away at the lead over the next few innings against Yankees starter J.A. Happ. New old Met Todd Frazier hit his third home run of the year to put the Mets on the board in the bottom of the second inning. In the fourth, Frazier led off the inning with a double, and eventually came around to score the second run of the game on a Jake Marisnick double.

One batter later, Amed Rosario singled home Marisnick, to come within a run of the Yankees. Two more singles from Robinson Chirinos and Jeff McNeil brought in Marisnick to tie the game.

The third of the trio of new Mets, Miguel Castro, came in to pitch the seventh inning. The inning started off promising, inducing a ground out from Voit and striking out Clint Frazier, with a walk to Aaron Hicks in between the two. But when Hicks stole second base, the wheels started to come off for Castro. A four pitch walk to Mike Ford was followed by a single to Gio Urshella to bring in the go-ahead run. What appeared to be a playable hit down the first base line by Brett Gardner went under the glove of Pete Alonso to put the Yankees up, 6-4.

In the top of the eighth, Justin Wilson would give up a third run on a LaMehieu double ,a wild pitch, a Voit walk, and a Hicks single. In the bottom of the inning, Todd Frazier collected his third extra base hit of the game when he pulled a ball over third base off of Zack Britton. A walk to Dom Smith and an infield single from Marisnick loaded the bases with two out. Amed Rosario chopped a ball between first and second to bring in two, pulling the Mets within one run.

The bottom of the ninth should’ve been a glorious one for the Mets. McNeil led off the inning against Aroldis Chapman with a walk, and was pinch-ran for by Billy Hamilton. Hamilton attempted to steal second, but a balk from Aroldis Chapman made it a moot point. Unfortunately, Hamilton tried to steal third one pitch later, and was thrown out.

J.D. Davis then hit a towering home run which, had Hamilton thought before running, would have been the game winning blow, merely tied the game at 7.

Somehow, Edwin Diaz pitched the ninth and the tenth in scoreless relief. He got quite lucky in the top of the tenth, when a line drive by LaMahieu was hit right to Michael Conforto, which led to a double play when Tyler Wade misread the play and allowed himself to be doubled off second base.

Despite rain coming down in buckets since the top of the ninth, the game continued through heavy rain into the bottom of the tenth inning. With Dominic Smith having made the last out of the ninth, he started on second base. It turns out the Mets didn’t need that runner, as Pete Alonso broke out of his 4 for 42 slump to hit a towering home run to give the Mets the win in their final game with the Yankees this season.

Tomorrow, the Mets welcome the Phillies to Citi Field for a four game set. The series begins with a battle of disappointing seasons, with Rick Porcello facing off against Jake Arrieta.