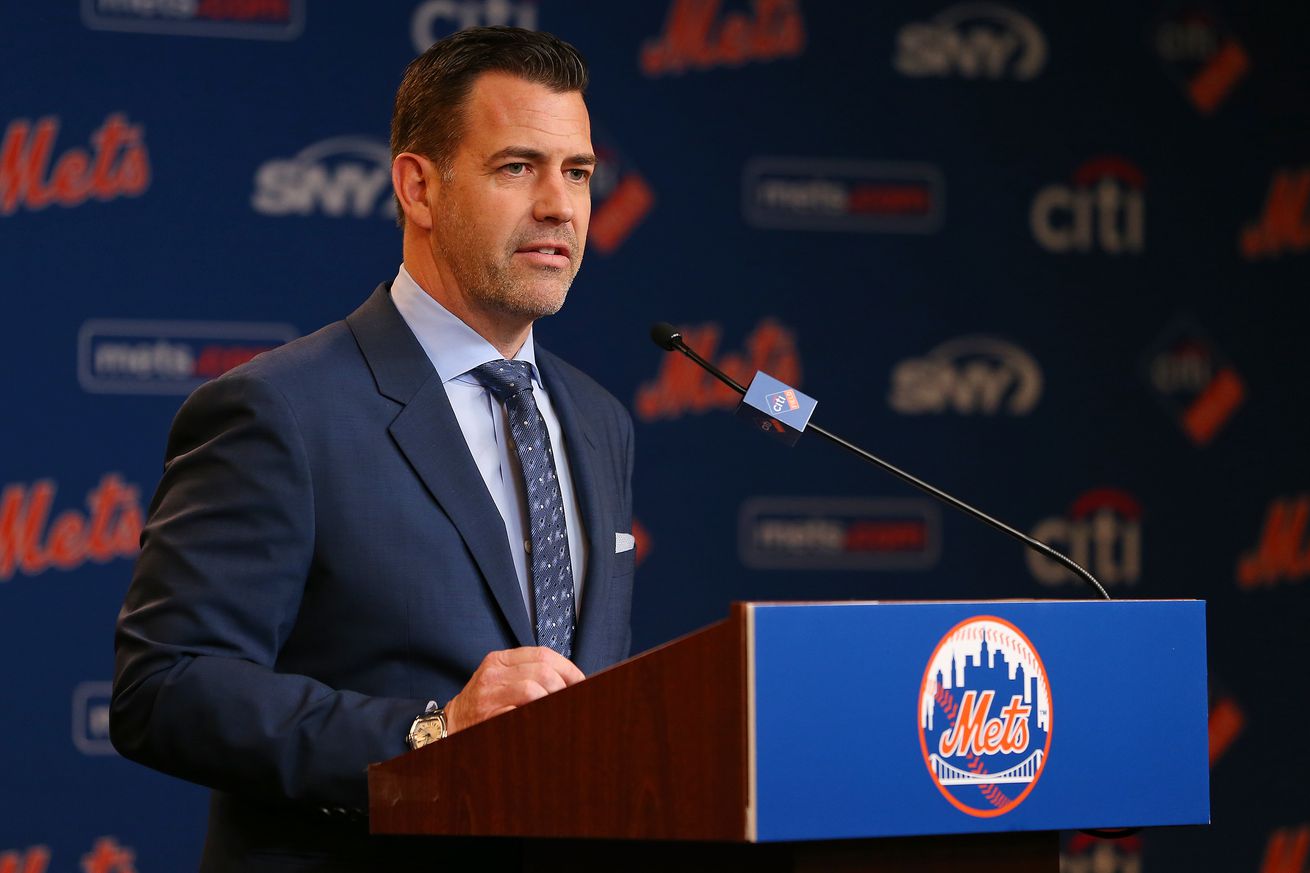 When the Wilpons hired former sports agent Brodie Van Wagenen to take over as the Mets’ general manager in October 2018, it was widely viewed as an odd hire, but not one without potential. The spunky Van Wagenen brought a certain energy and a stern confidence to the role that the Mets had lacked for quite a while.

It wasn’t crazy to be optimistic about what Van Wagenen could do. He said all the right things early on and made it known that he was going to be bold and brazen. He won many people over in his first press conference with his elegant, natural tone and debonair charm. He stated the importance of creativity and investing in the front office, and touted his goal to win both in the present and in the future.

He did none of that. He never quite fleshed out the front office to modern standards. The Mets went a combined 112-110 in two seasons under Van Wagenen and missed the playoffs both times, while the boldest thing he did was trade several top prospects and gut the team’s farm system for lackluster returns.

And now, his regime has ended just two years and one week after it began. Last Friday, new owner Steve Cohen officially took over control of the team, and the first thing he and new Team President Sandy Alderson did was oust Van Wagenen and many of his top lieutenants, immediately removing any trace of the former agent from the front office structure.

Van Wagenen’s tenure is undoubtedly going to be viewed as a colossal failure, and mostly defined by his first big move as general manager. In November 2018, he agreed to trade Jarred Kelenic, Justin Dunn, Gerson Bautista, Jay Bruce, and Anthony Swarzak to the Mariners for Robinson Cano and Edwin Diaz. The decision to trade a top prospect like Kelenic was a risk even at the time, but Kelenic developing into one of the 10 or 15 best prospects in baseball the next season made Van Wagenen just look foolish. This trade may not look like the sheer historic disaster it did after 2019 thanks to good seasons from both Cano and Diaz this year, but it still doesn’t look great. There are still many years to go before we know just how bad this trade was, but it will take either a serious underperforming Kelenic or some historically excellent seasons from Diaz and Cano to reflect well on Van Wagenen.

In hindsight, that move really should have served as an omen for what was to come, because it seemed like no prospect was ever safe under Van Wagenen. He would dip into the farm system many more times during his tenure, most notably at the 2019 trade deadline when he dealt Anthony Kay and Simeon Woods-Richardson for Marcus Stroman. The Mets made the trade for Stroman not just to get an extra starter for 2019, but also for 2020. Van Wagenen obviously could not have predicted a pandemic would cause Stroman to opt out of the 2020 season, but this trade didn’t pan out how he hoped. Stroman’s return for 2021 may be the detail that will push this trade into more positive light, though Stroman’s personality and socially conscience presence on the club, even from afar in 2020, was a positive asset for the Mets.

Van Wagenen also chipped away at the farm with smaller moves too. Pitchers Bobby Wahl, Blake Taylor, Jordan Humphreys, and Steven Villines were all shipped off at various points over the last two years. Taylor, who Van Wagenen traded for 34 PAs of Jake Marisnick, turned out to be a key part of Houston’s bullpen this year. Wahl, Humphreys, and Villines may never turn into anything, but they all have been promising pitchers at some point, and could be valuable to a team strapped for upper-minors pitching depth like the Mets. The players the Mets got in return for those three were Keon Broxton, Billy Hamilton, and Ariel Jurado, who combined for -0.9 bWAR on the Mets.

Van Wagenen also dealt Kevin Smith for Miguel Castro, and Neraldo Catalina for Wilmer Font. Catalina has made some noise in the Rays’ system, while the Mets got 31 innings and a 4.94 ERA out of Font. We are also still waiting to find out who the PTBNLs are in the trades for Robinson Chirinos and Todd Frazier from earlier this year, but those were two largely pointless trades and we can only hope the Rangers don’t pick some promising players out of the Mets’ farm as a result.

His record on trades was bad enough, but Van Wagenen found little success on the free agent market as well. His first actual move as Mets GM was to non-tender Wilmer Flores, with the grand idea of replacing his production with that of Jed Lowrie. Flores hit .296/.341/.499 across 498 PAs for the D-Backs and Giants over the last two years. Jed Lowrie is a Major League Baseball player who was a member of the New York Mets from January 16, 2019 to November 1, 2020.

Van Wagenen did find some useful players on the market in Justin Wilson, Luis Avilan, Chasen Shreve, Brad Brach, Jared Hughes, and Wilson Ramos. But those are overshadowed by the much larger-scale disaster signings like Lowrie, Jeurys Familia, Dellin Betances, Rick Porcello, and Michael Wacha. Plus, giving Brach and Betances player options for 2021 was a silly thing to do.

Conversely, Van Wagenen’s biggest success as GM was probably his trade for J.D. Davis. It was another example of trading potentially a useful minor leaguer—Ross Adolph—for someone who could turn out to be a spare part, but Davis reached his full potential offensively and turned out to be much more than that. Davis was Van Wagenen’s best find and could be a key piece of the franchise going forward.

Van Wagenen’s other successes include extending Jacob deGrom—though as deGrom’s former agent, he was supposed to recuse himself from those negotiations to avoid conflict of interest—and choosing not to manipulate Pete Alonso’s service time in 2019. Some may also consider criticizing Rob Manfred on a hot mic as a positive. His draft record is also decent, with first round choices Brett Baty and Pete Crow-Armstrong showing much promise, and his unlikely signing of Matt Allan a highlight as well.

But the wreckage Van Wagenen leaves behind is undeniable, and it’s going to be difficult for the new regime to repair the damages and build a winner right away. However, like any Mets GM, Van Wagenen cannot be judged without acknowledging that he was likely hamstrung and controlled by ownership every step of the way.

Could he have done better under normal ownership? It’s almost impossible to say. There’s a Wilpon aspect to basically every move Van Wagenen made. Would the Stroman trade have happened if the Wilpons could have mustered up the money to keep Zack Wheeler? What would Van Wagenen’s free agent moves looked like with a budget? We already know that the Wilpons changed the budget last offseason and had to be sold on signing even just Wacha and Porcello. Was parting with all of those prospects really his call? Van Wagenen admitted himself that he was “in constant contact” with Jeff Wilpon during negotiations of the Cano/Diaz trade, and Wilpon particularly wanted it done just to block the Phillies from getting Diaz.

It’s very possible that Van Wagenen was just a well-spoken, dapper figurehead whose job was to carry out the vision of the Wilpons. Regardless, the moves he made are on his record, and that record is not a good one. Van Wagenen will likely go down as one of the worst GMs in Mets history, and it’s hard to see how he winds up in charge of another front office anytime soon.