First thing I want to say right off the bat: great job by MLB to finally let the Mets wear first responder hats during a major league game again on September 11th.

Finally! Last year was the last straw. The players were adamant and their voices have been heard. Thank you to all involved for at long last doing the right thing and allowing the Mets to pay proper tribute to the heroes; some who to this day continue to pay the ultimate price.

There’s really no good reason that MLB didn’t allow this from 2008-2019. None. And there’s no good reason that the Mets didn’t just say “to hell with MLB protocols and rules, we’re doing this”, because MLB levying any sort of penalty, financial or otherwise, would have looked bad even back in ’02, let alone now. I’m sure there are reasons, but none of them good. Now, we can discuss amongst ourselves why this was the year that it finally happened … not next season, the 20th year since the tragic attacks when the Mets are set to host the Yankees on 9/11/21, but this pandemic shortened season in Buffalo of all places. But the Mets wearing the first responder caps is better than the Mets not wearing the first responder caps. So we’ll leave it at that while we’re here. 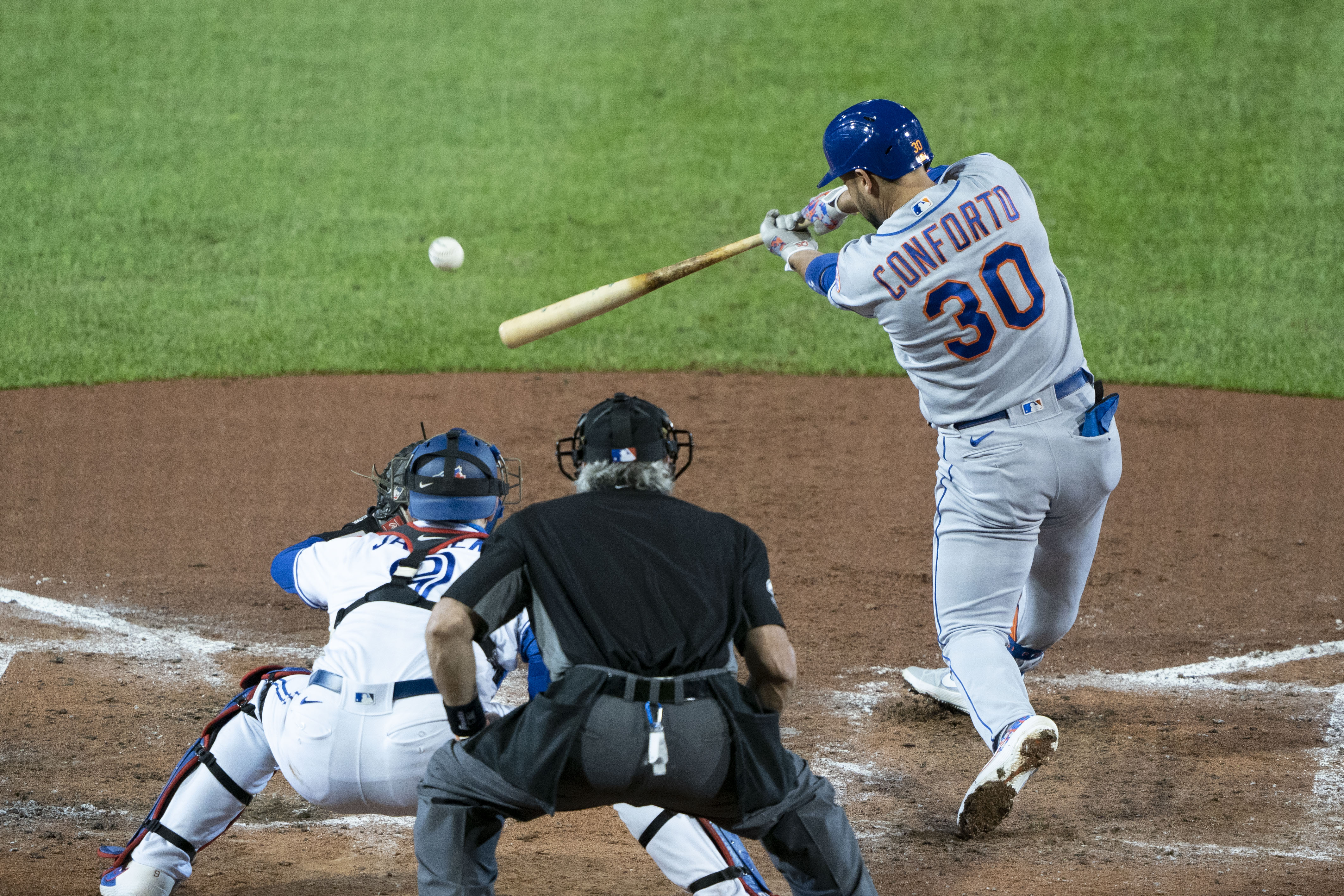 As for the game, it’s nice to see the Mets continue to provide double digit run support to Jacob deGrom who, after years of the run support equivalent of ramen noodles, is feasting on Thanksgiving leftovers. Of course, it helps when you have the Blue Jays dropping the holiday ambrosia all over the floor, as they did in the fourth inning. After Michael Conforto hit a three run HR and Jeff McNeil doubled home a run in the third to make it 4-1 Mets, the Mets loaded the bases in the fourth with nobody out to bring J.D. Davis to the plate.

Davis hit a groundball to the drawn in shortstop Santiago Espinal who fired a strike to Danny Jansen for what should have been a fairly easy double play. But Jansen dropped the easy throw and it rolled away far enough for even Wilson Ramos to score, and that made it 5-1 and sent the lambs scattering. Dom Smith followed up with a grand slam on a 3-0 pitch off Anthony Kay to make the game 9-1 and send it on a path to oblivion for Buffalo.

The Mets would score four more in the fourth thanks to a three run double by Wilson Ramos, a single by Conforto, and a double by Davis to make it a laugher. Ramos would later go deep to make it 17-1. It wasn’t quite the 29 that the Braves hung on the Marlins on Wednesday, but 18 runs were enough to do the trick (and enough to get Erasmo Ramirez a save). I’m convinced that this is all revenge for the Buffalo media complaining that the Mets never sent their stars there to rehab when they got hurt when the Bisons were the Mets’ AAA affiliate. Well all the stars came out tonight in the land of the Bison.

As for Jacob deGrom, he had a couple of hard hit balls off him early, one being a foul ball just to the right of the RF foul pole, and one being a hard RBI single off the wall to score the Jays’ only run of the night. deGrom also labored through the later innings after sitting for that long top of the 4th (he’s not used to sitting through big innings). But he was always in control and gave up one run in six innings to bring his ERA to 1.67 for the season and put himself in a really good position to win his third straight Cy Young award. It also would have started the Hall of Fame conversation, but it has already started here.

Seth Lugo and David Peterson round out the series against the immortal TBD, who must be pretty good if he’s starting twice in a row.

Now that MLB has allowed Yankees/Mets to wear first responder hats, they could find selves in awkward position of ranking tragedies. That was always the concern — what happens the next time a team wants to commemorate a terrible event? Is 9/11 only carve out? New questions arise.